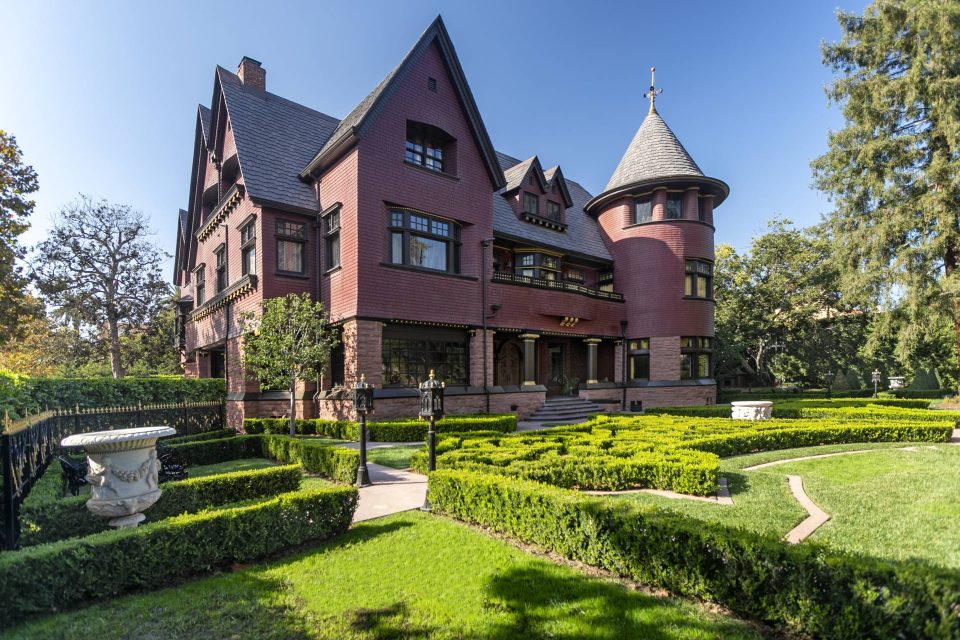 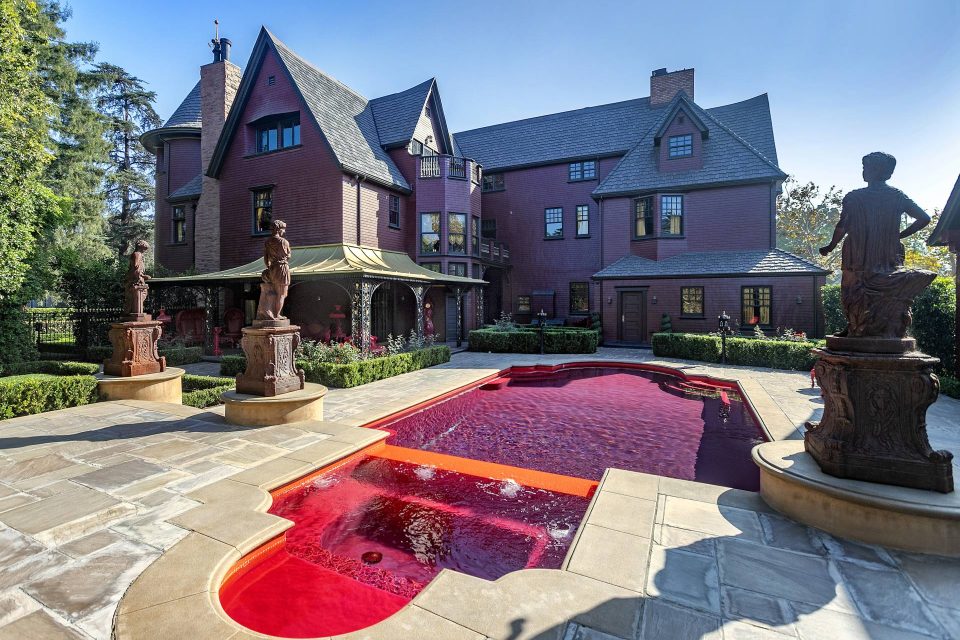 The blood-red pool is a true statement piece. 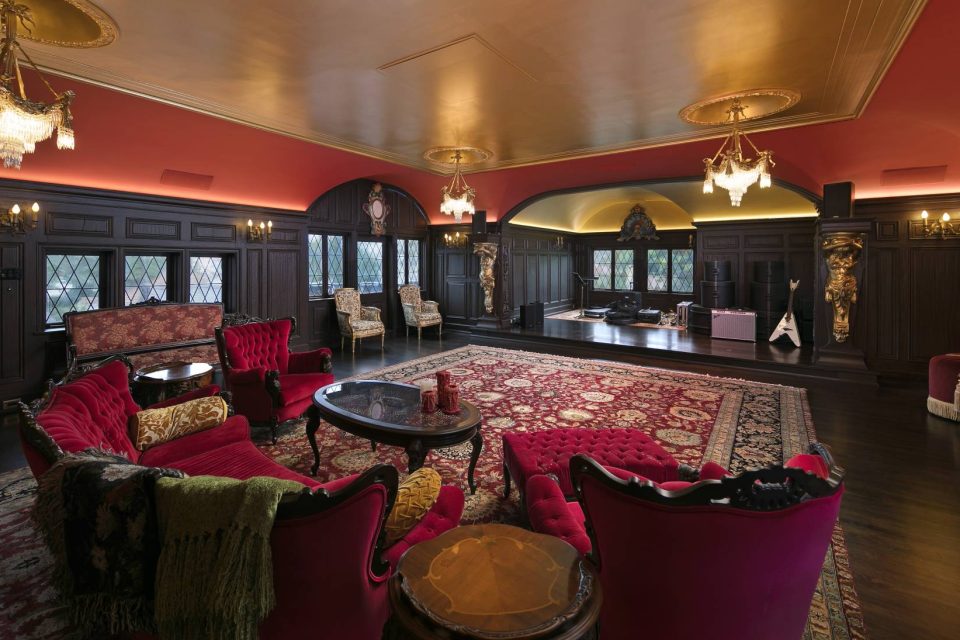 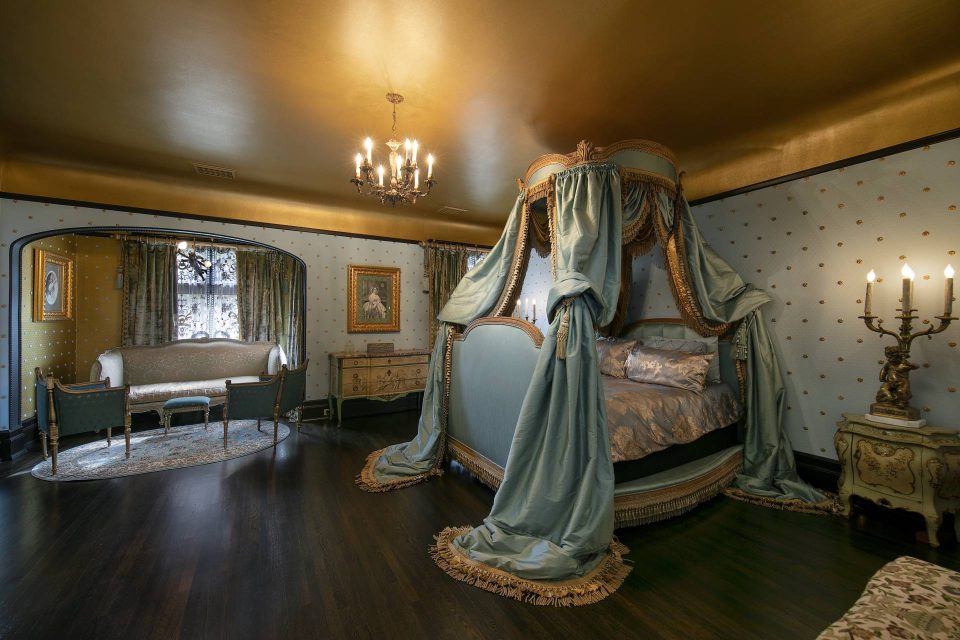 Each bedroom has its own distinctive style. 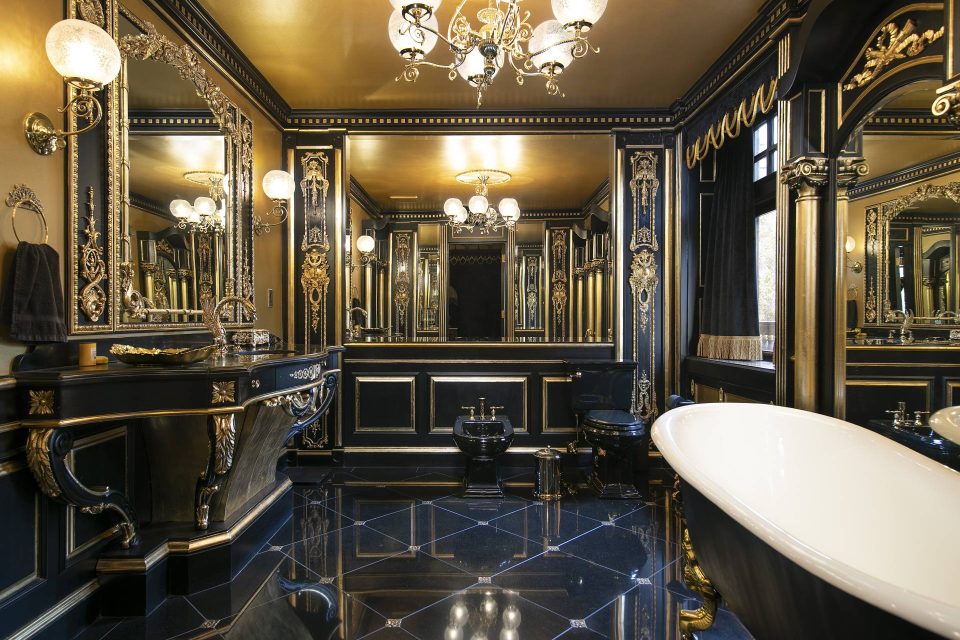 This bathroom is classy and striking. 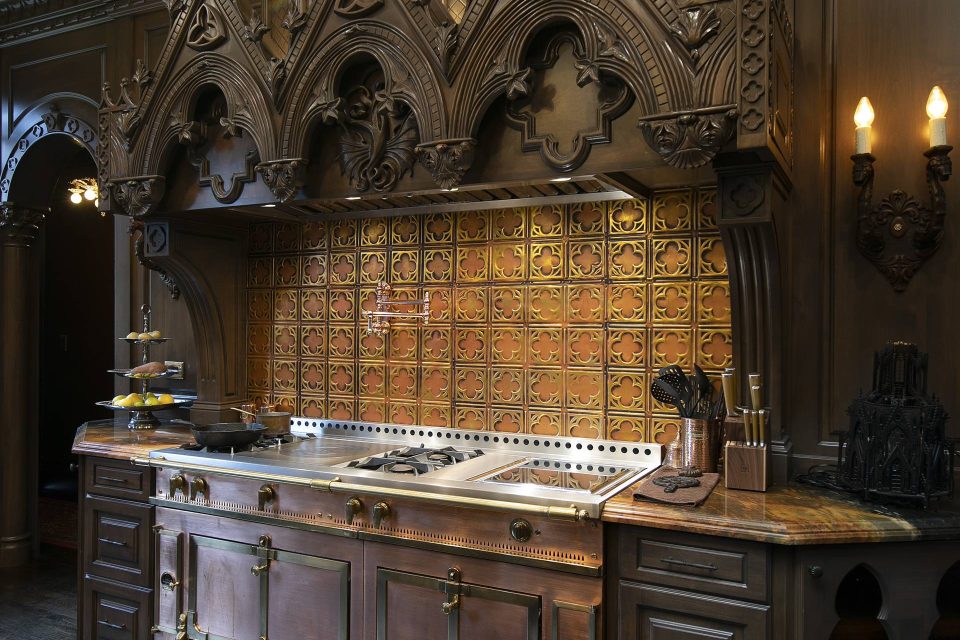 The hidden bar has a secret entrance. 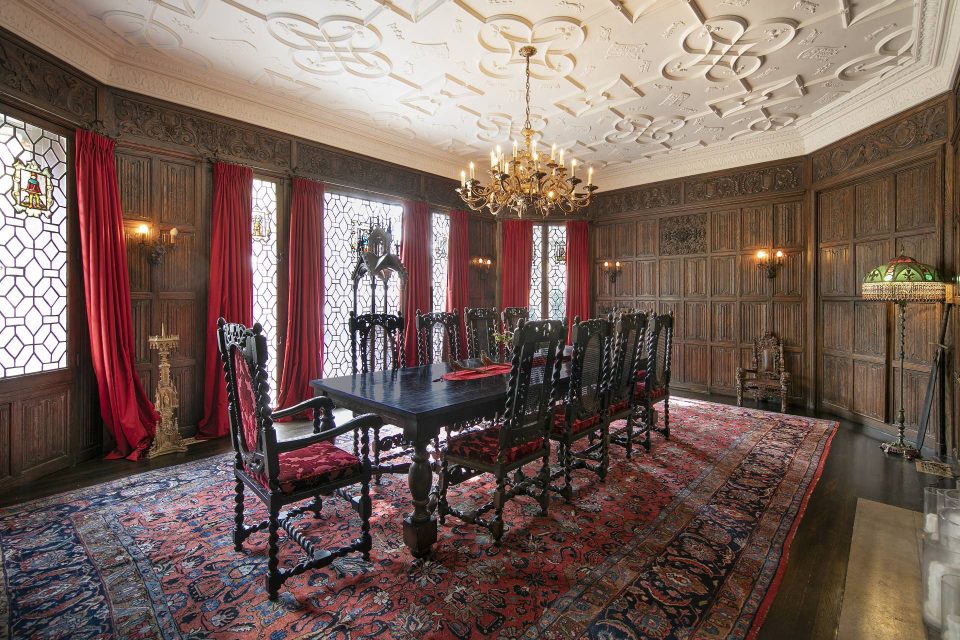 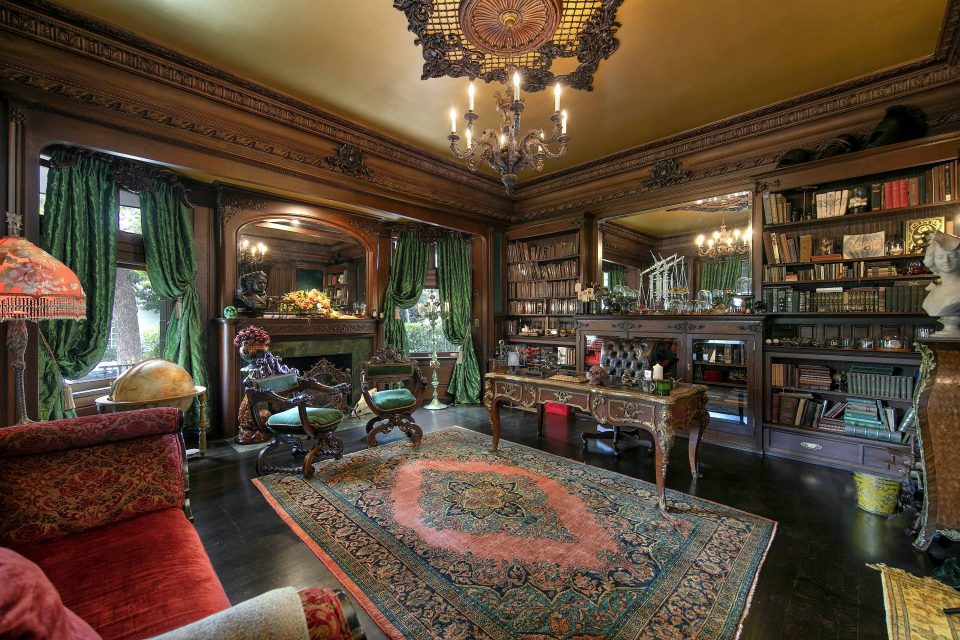 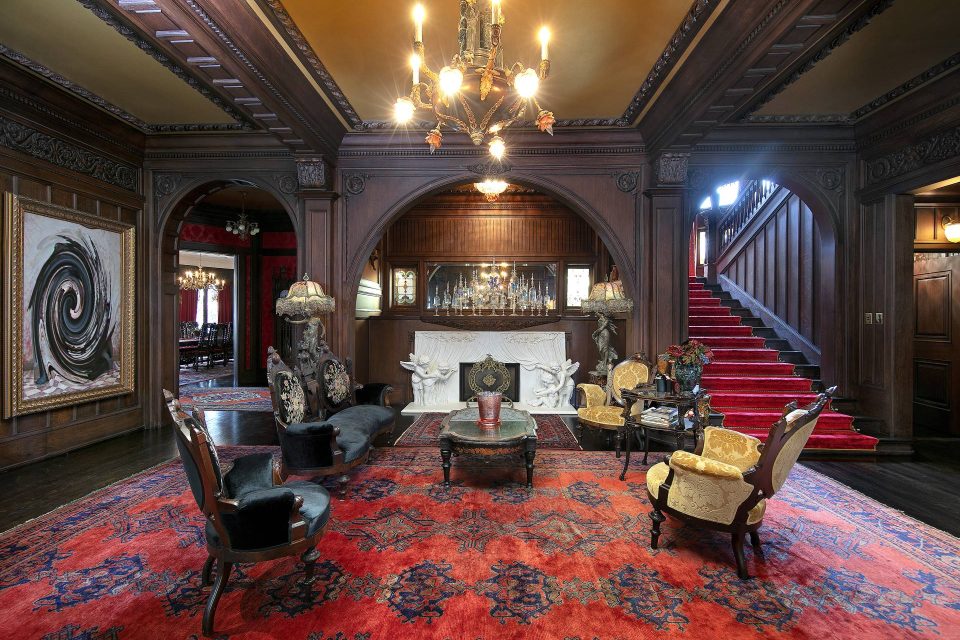 The grand entrance has an exquisitely carved fireplace. 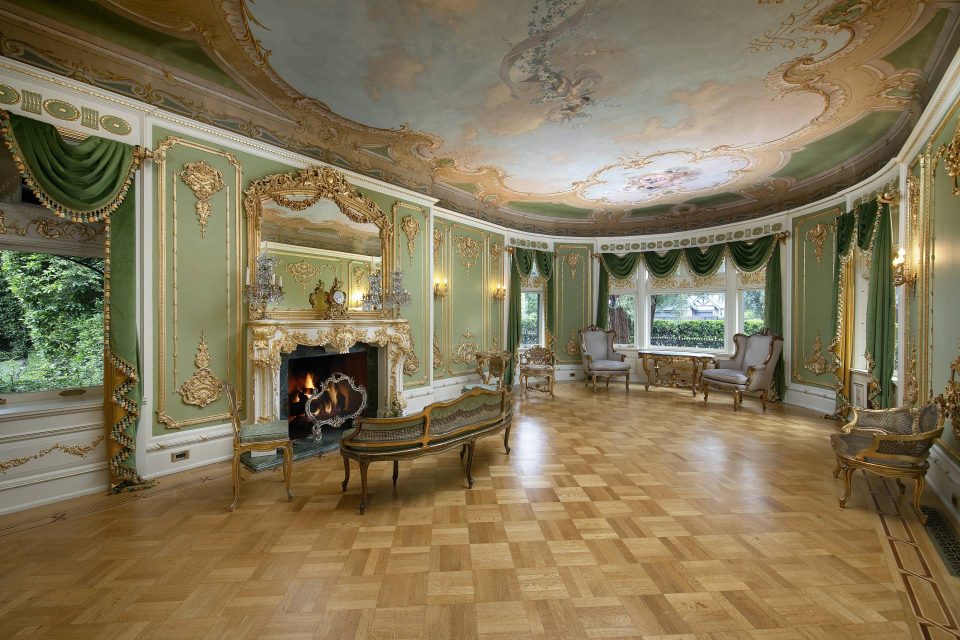 A charming mural brightens up this sitting room. 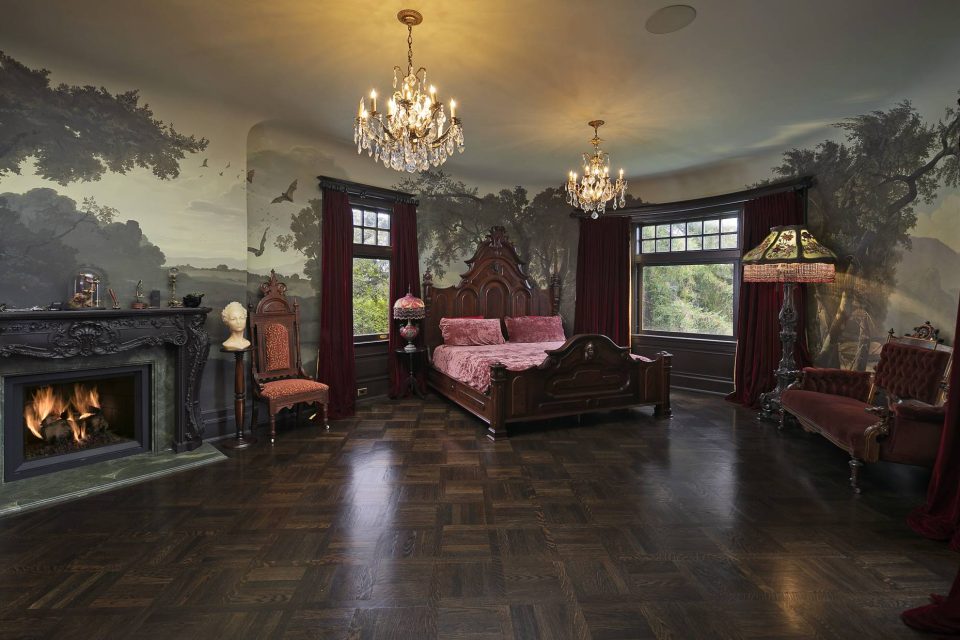 The bat themed mural and fireplace make this room special.

Best known for her TLC reality show LA Ink, which chronicled her work as a tattoo artist and tattoo studio owner, Kat Von D is a multi-faceted star. A model, recording artist, New York Times bestselling author, animal rights campaigner, and entrepreneur, the Mexican-born Kat Von D is famous for her gothic style. In 2016, she paid $6.5 million for the LA mansion which served as the set for 2003’s family comedy Cheaper by the Dozen and completely remodeled it to suit her spooky aesthetic. In recent months, Kat has closed her LA studio, High Voltage Tattoo, and announced a move to Indiana to spend more time with her family. Her spectacular, distinctive home has now been listed for sale at $15 million.

The three-story Victorian mansion was originally built in the 1890s by Isaac Newton Van Nuys, who once owned the entire southern portion of the San Fernando Valley and for whom the city of Van Nuys is named. With striking red brick and turrets, the magical estate is completely gated and sits on over half an acre of manicured grounds with maze-like gardens and fountains. A blood-red swimming pool flanked by classical statues makes for an impressive statement piece, with plenty of patio space for entertaining.

The sprawling main residence offers 12,565 square feet, eleven bedrooms and eight-and-a-half baths. The grand salon connects seamlessly to the library, den, formal living and sitting rooms. The dining room is lined with linenfold paneling and stained-glass windows and connects to the fully renovated chef-quality kitchen. A hidden bar with hand-carved walls conceals a secret door that leads out to the pool and spa.

Every room in the house has been carefully styled, with intricate woodwork and ornate details. One bedroom suite features a custom-painted, bat-themed mural and a fireplace, one of seven throughout the residence. The top floor provides a special living space that doubles as a theater with a bar and kitchenette. The stage is complete with original footlights and a dramatic turret side room. The home’s systems are modern and updated, including the multi-zone HVAC system, painstakingly installed without disturbing the intricate original wood and plaster work. The estate also includes a two-bedroom, two-bath carriage house above the garage.

Located near Hancock Park, the home is close to the center of Los Angeles, convenient to the 10 and 101 freeways and a few miles from the entertainment zone of Hollywood Boulevard. Nearby options for entertainment include the Los Angeles County Museum of Art, The Wilshire Country Club, and the numerous shops and restaurants at The Grove. At one time, Hancock Park was home to Golden Age Hollywood celebrities, including Howard Hughes, Mae West, Muhammad Ali, and Nat King Cole. Home to many historic houses, the neighborhood still attracts celebrities such as George Takei, Manny Pacquiao and Antonio Banderas.

The listing is held by Jamie Sher of The Sher Group. 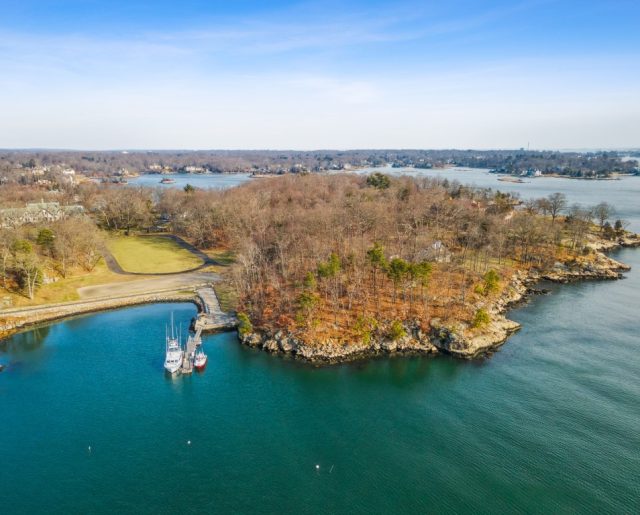 One of America’s last family-owned Gilded Age mansions has hit the market at $100 million.  Located in Darien, Connecticut on...Read More