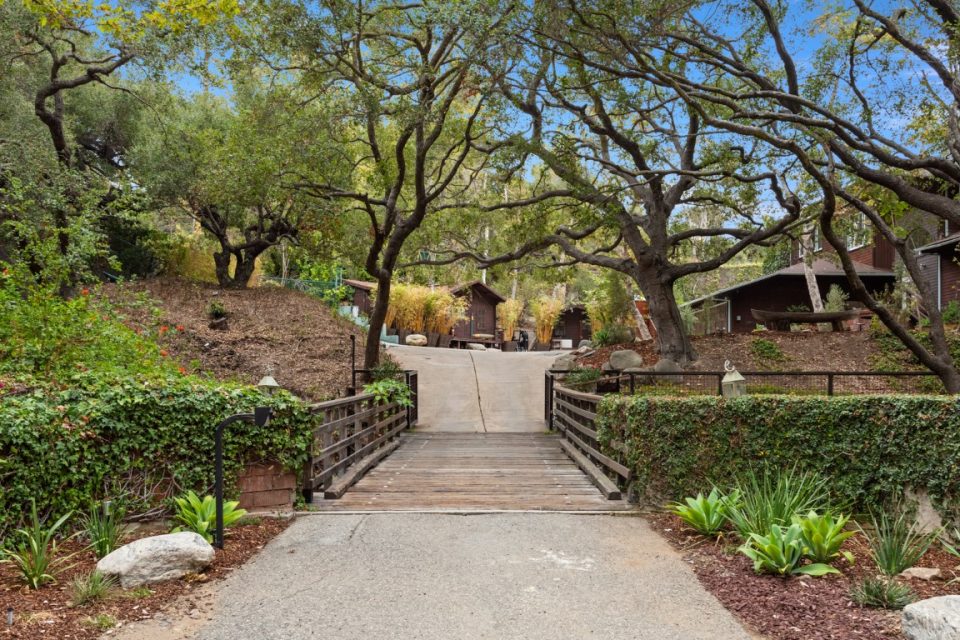 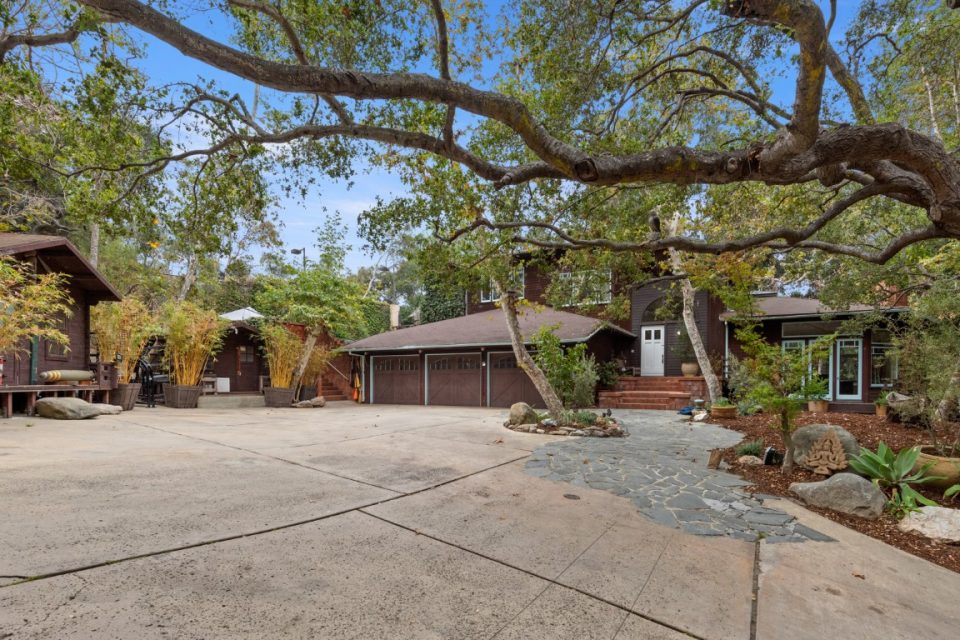 The motorcourt is large enough to park a houseful of guests. 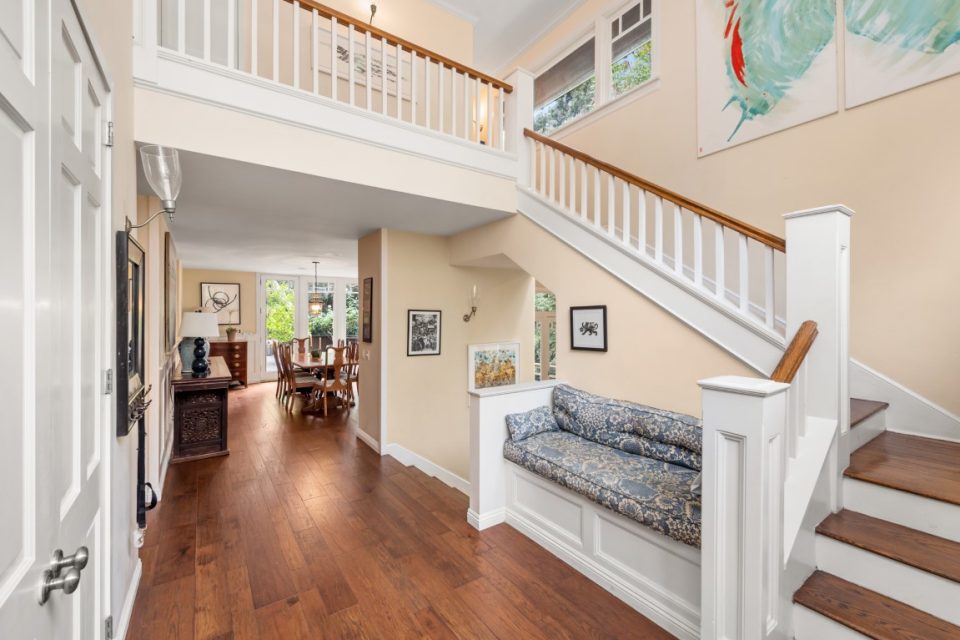 The traditional foyer shows off a curved staircase with overlook. 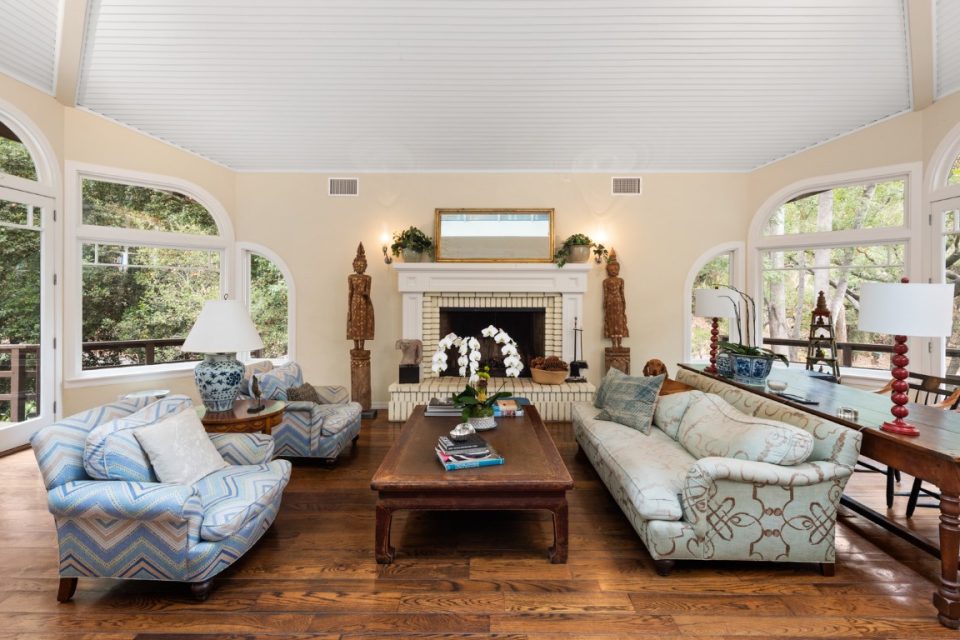 The formal living room has an air of casual comfort. 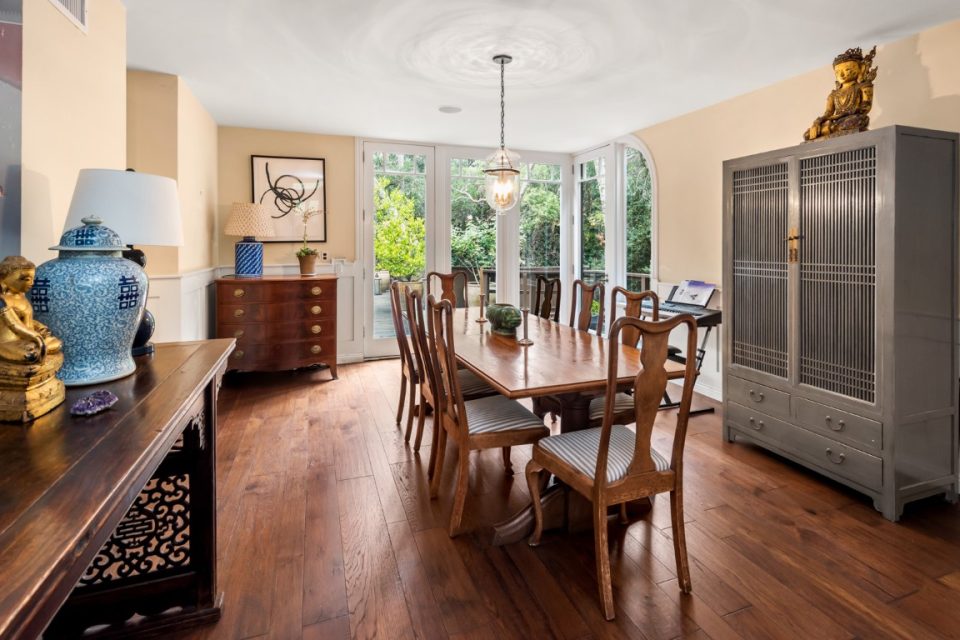 The large dining room seats a large family in comfort for the holidays. 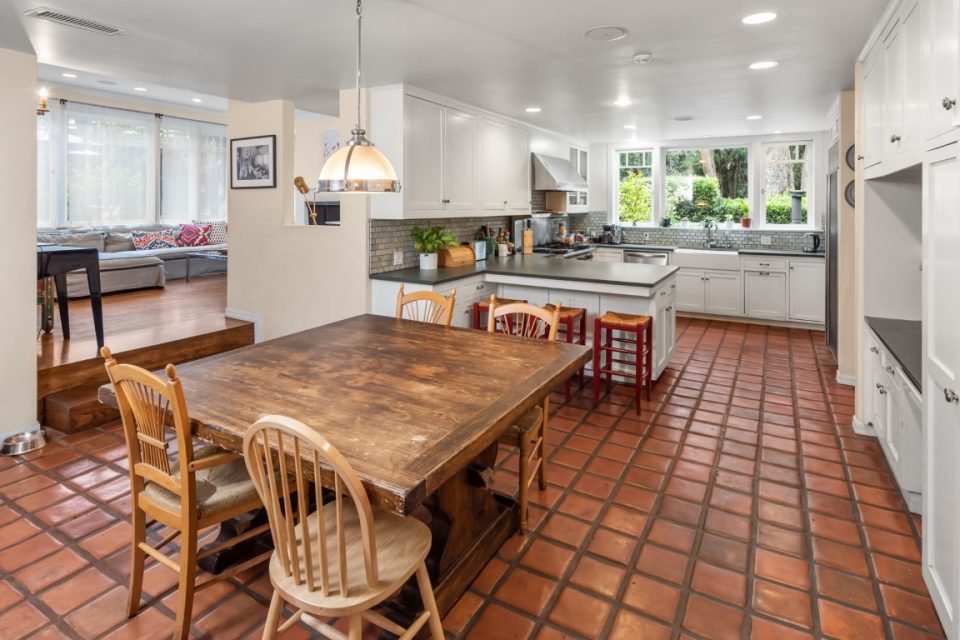 A true gathering kitchen, it also spills into a family room. 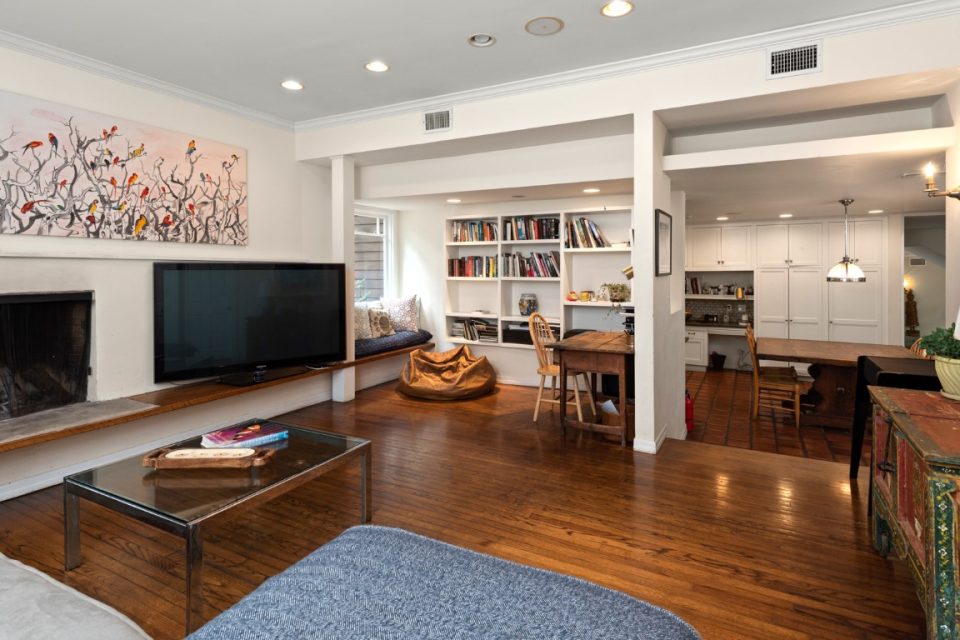 Another large room serves as a media and games room. 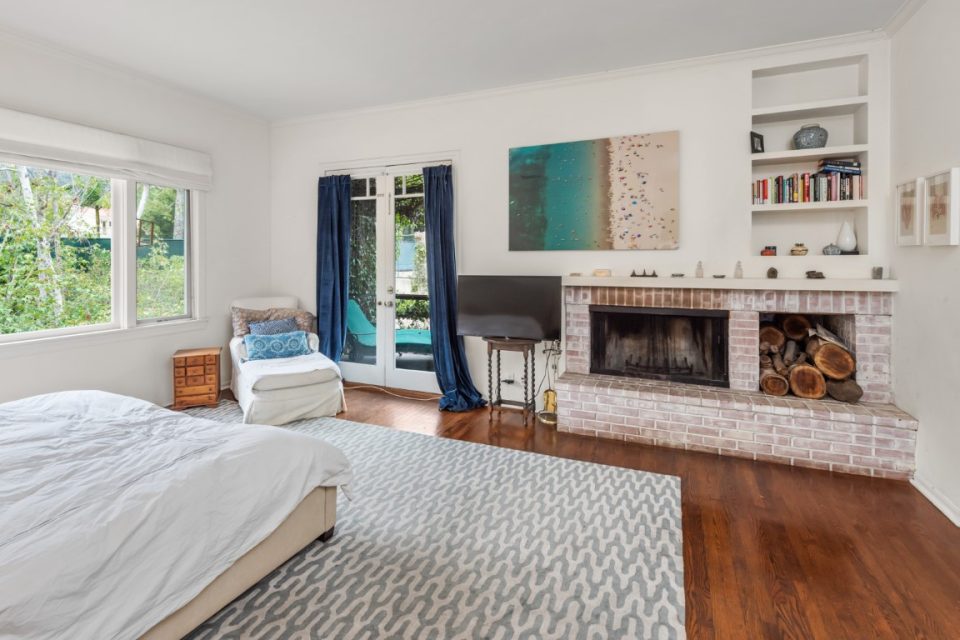 One of the five bedrooms also has a cozy fireplace. 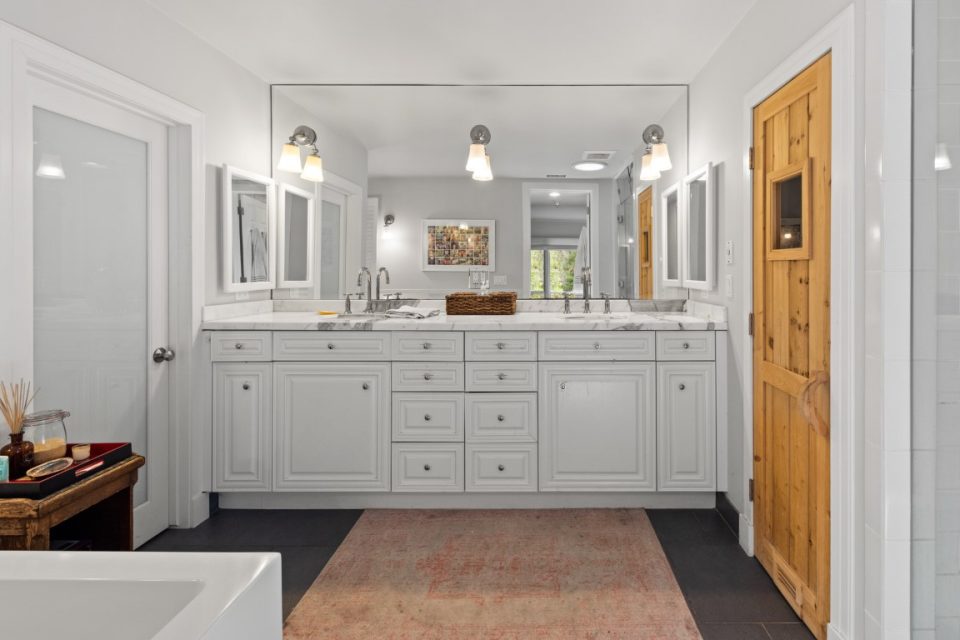 Bathrooms are spacious with a lot of storage. 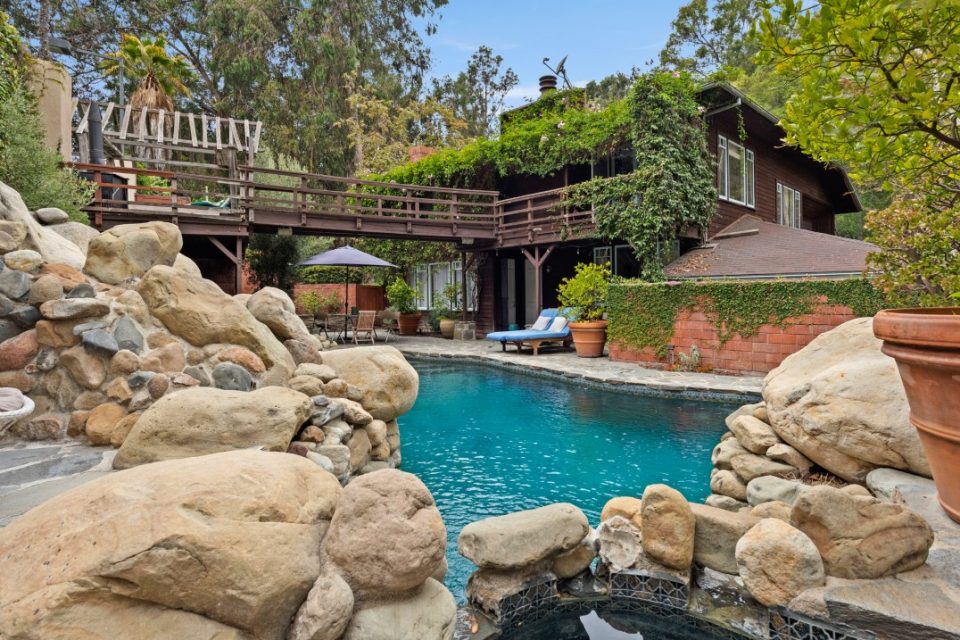 The pool and spa area appears to be naturally formed within a series of boulders. 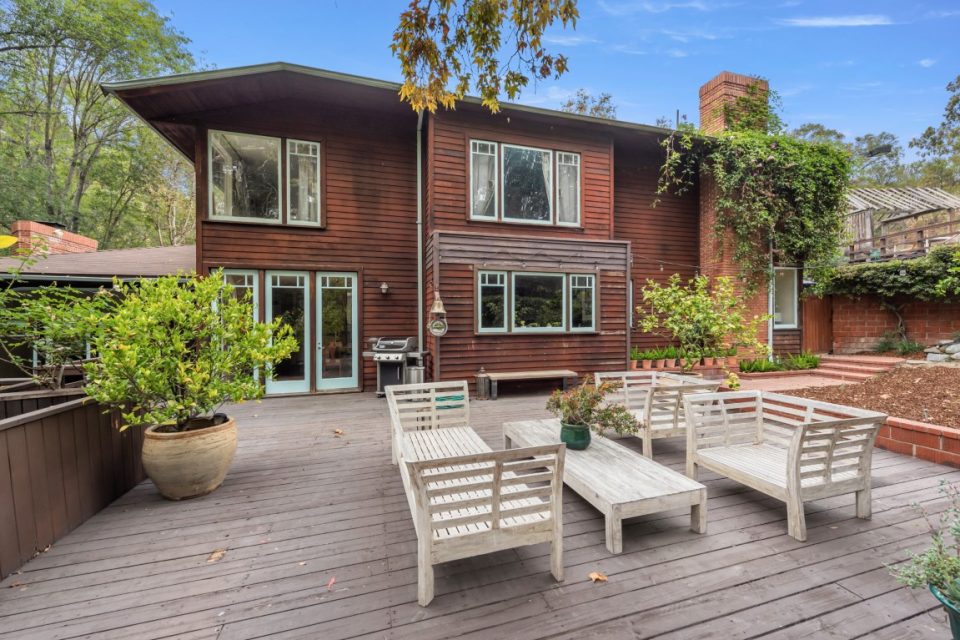 A large terrace is good for improving one's tan between dips in the pool. 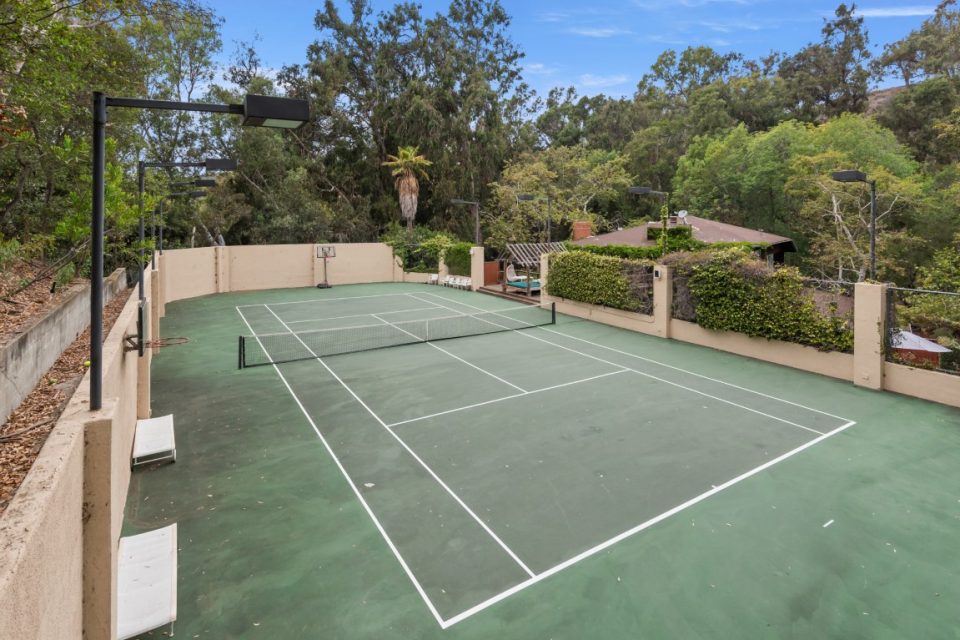 The tennis court is a great place for a brisk workout.

Privately tucked away on a country lane that meanders off of Sunset Boulevard in Los Angeles is a small community of 16 secluded homes that has attracted world-famous politicians, actors and industry leaders.  One house on the sparsely populated lane was previously the home of California Governor Arnold Schwarzenegger and his then-wife, Maria Shriver. Maria is a world-famous journalist and former host of several television news shows and the daughter of Eunice Kennedy and Sargent Shriver. The home is now being sold by its current owners, attorney-and author Maxwell Kennedy, who is the son of Robert and Ethel Kennedy, and his wife, Vicki Strauss Kennedy. It is priced at $11 million.

Nicely located on 1.75 acres between Will Rogers Historic Park and Rustic Canyon Creek, the 4,177-square-foot home, a mixture of New England and California-contemporary, was built in 1981. The neighborhood is zoned equestrian with a meandering, picturesque creek and several footbridges, riding and hiking trails.  The five-bedroom home has six baths, airy rooms with large windows and skylights, three fireplaces, a cheery kitchen and an adjoining family room.  There is a sauna, spa, grotto-style pool and a lighted tennis court in a setting of ancient oak, sycamore and eucalyptus trees.

The home in L.A.’s Pacific Palisades neighborhood was the family home for Schwartzenegger and Shriver and their four children from 1986 until the couple split up after Maria discovered that Arnold had fathered a child with the family’s longtime maid.  In 2013, the house was sold to Max and Vicki Kennedy for $12.9 million, keeping it somewhat in the Kennedy family.

Pacific Palisades has been a celebrity residential hotspot for decades, including Steven Spielberg, Tom Hanks and Rita Wilson, Michelle Pfeiffer, and Dennis Quaid.  Matt Damon has lived there for years near his friend Ben Affleck but recently moved to New York’s cold winters, leaving Affleck behind to enjoy California’s sunny outdoor living.

The house is listed by Billy Rose and Santiago Arana of The Agency, Beverly Hills. 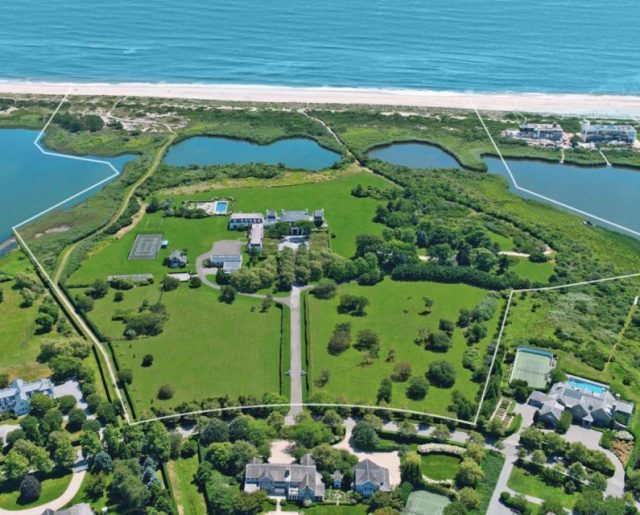 The Henry Ford II Estate – As Seen In HBO’s “Succession!”

One of the country’s premier estates is also seen as the summer home for the super-rich Roy family in the...Read More