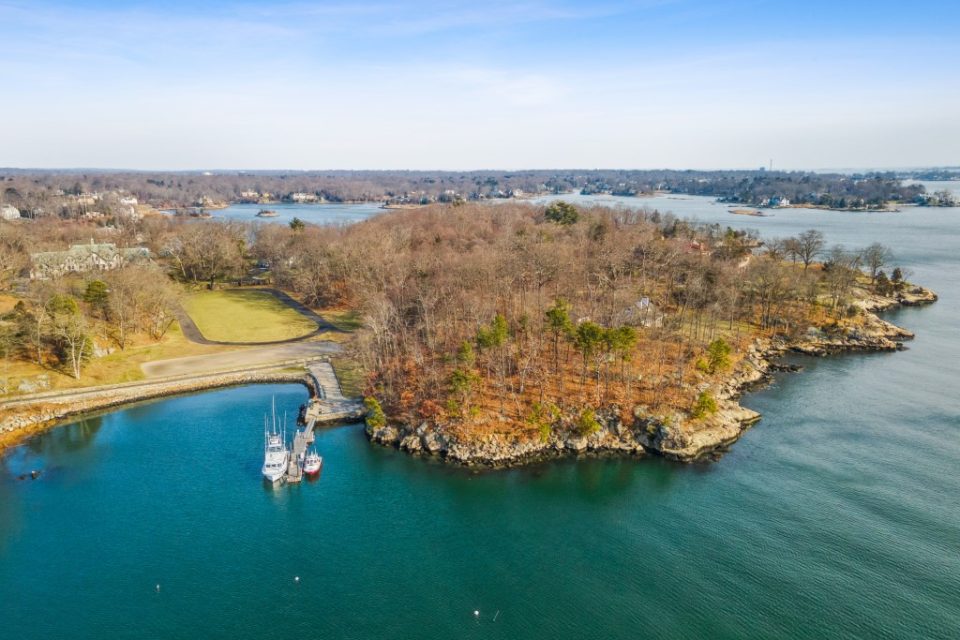 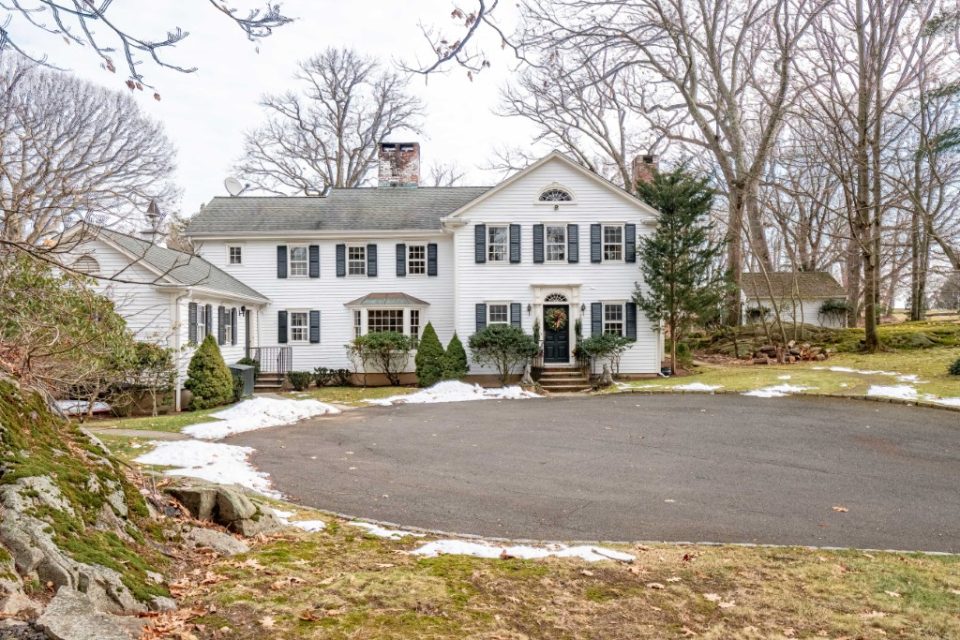 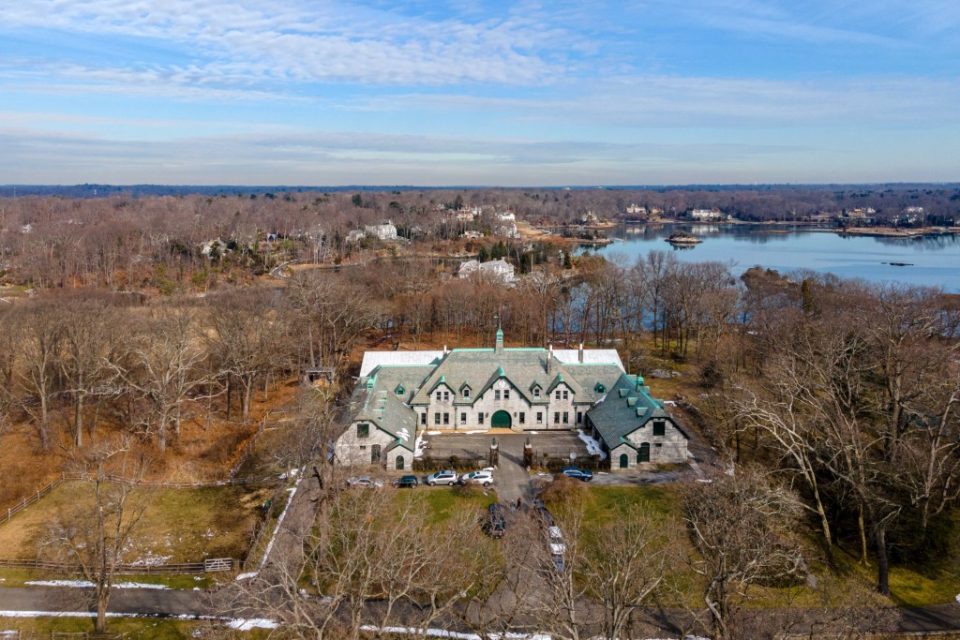 The equestrian show barn is beautifully designed with indoor and outdoor practice arenas. 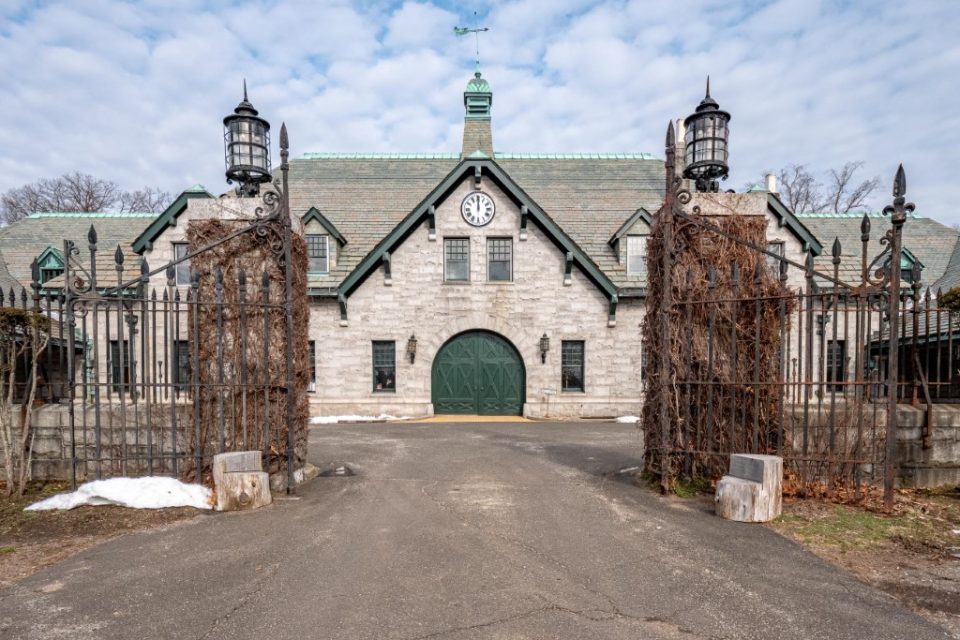 The entrance to the show barn is impressive. 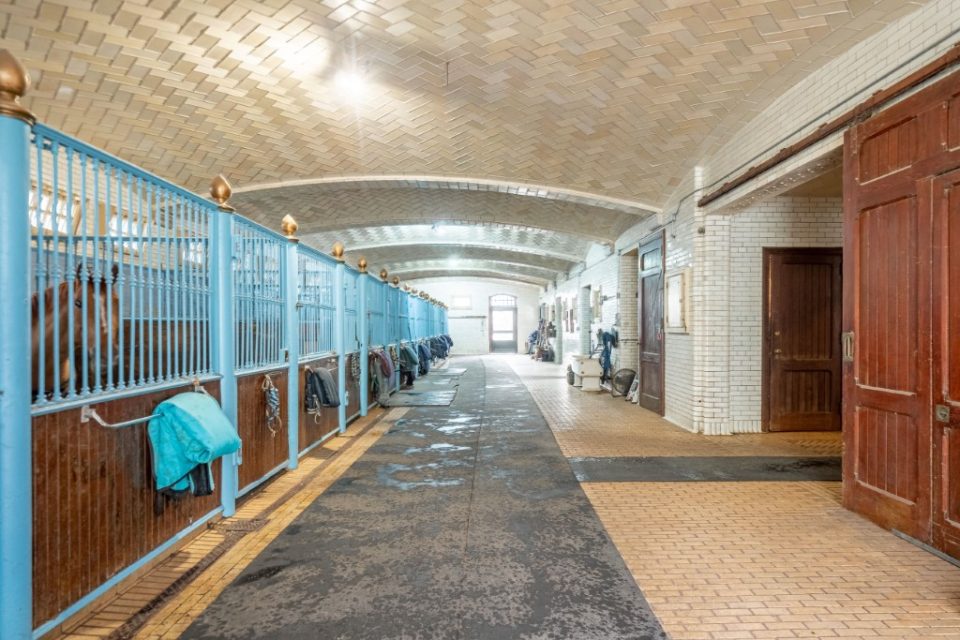 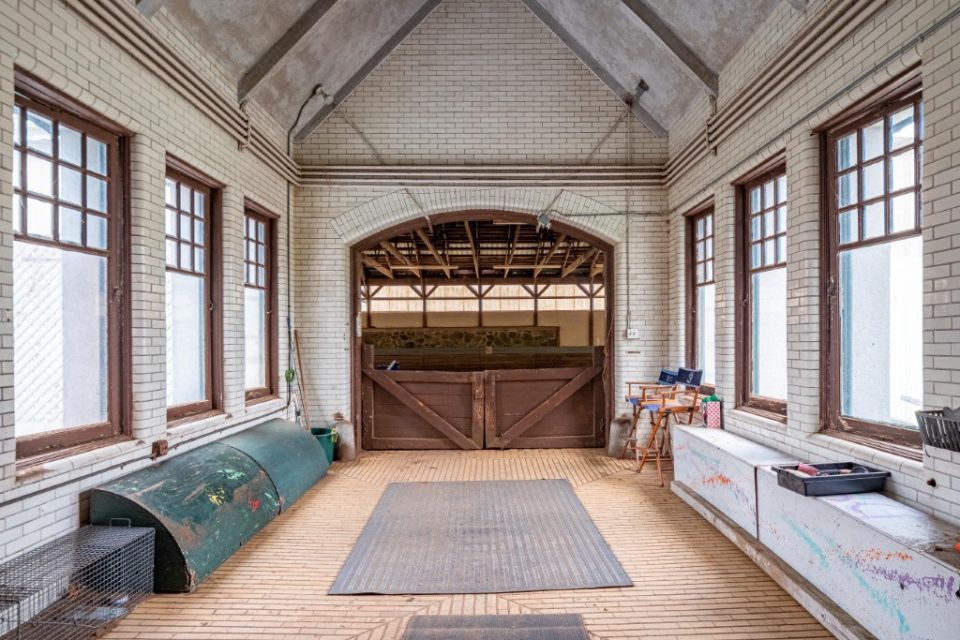 Not a detail is missed for the comfort and safety of horses and riders. 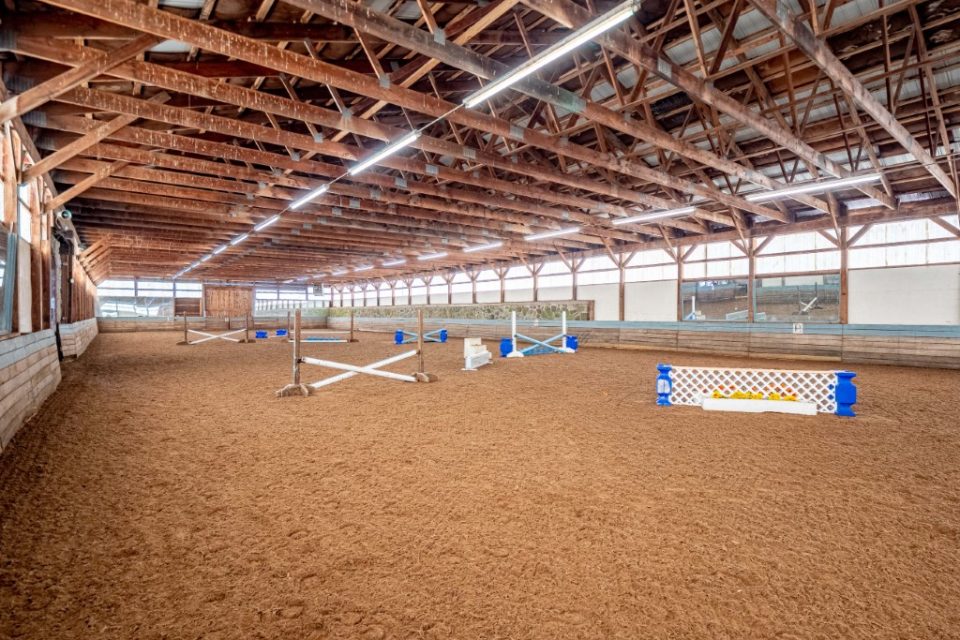 The indoor arena is large enough to work out jumpers and gaited horses. 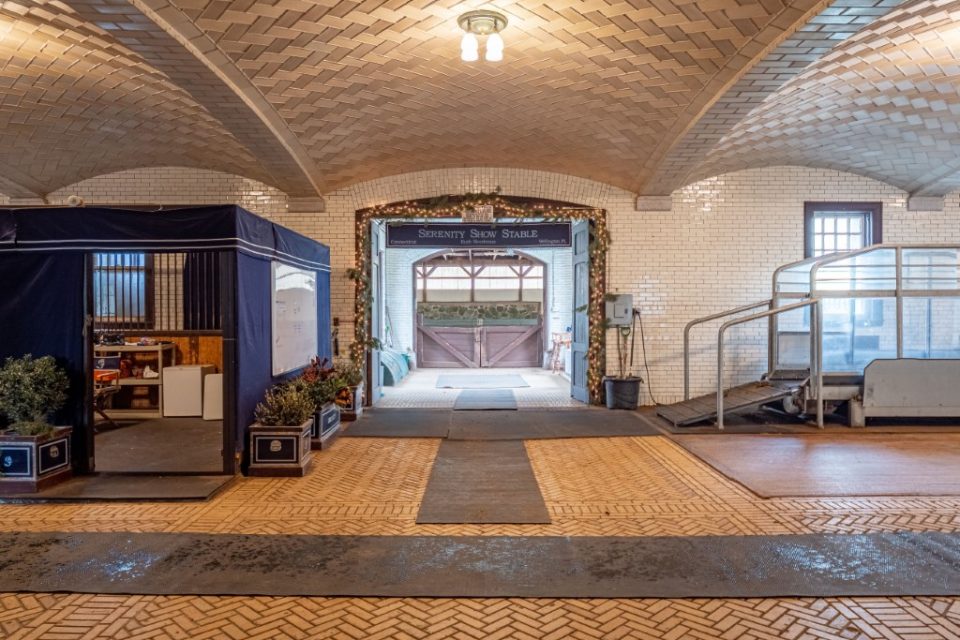 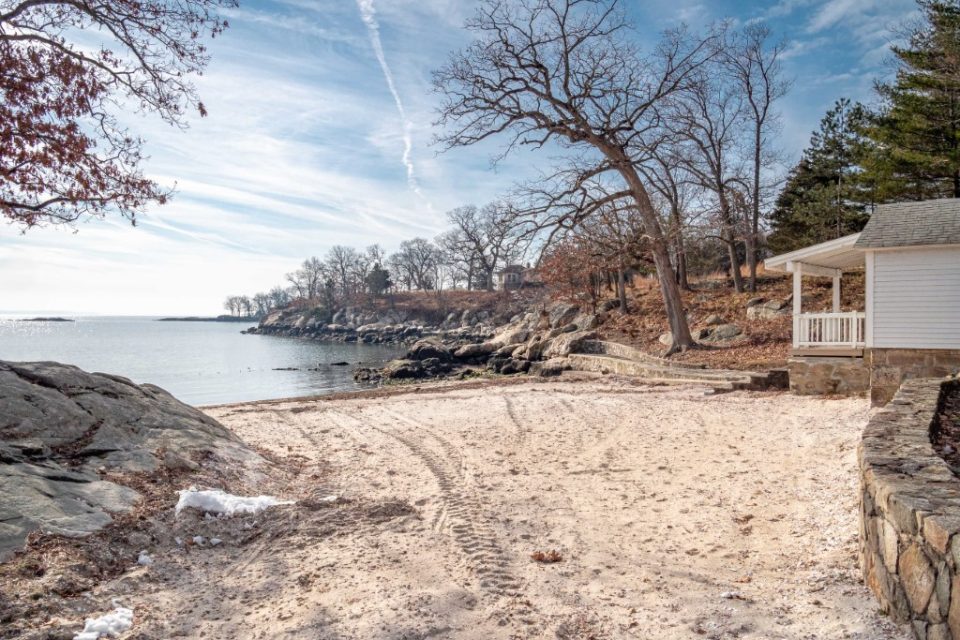 In summer, the beach or boating are additional forms of recreation. 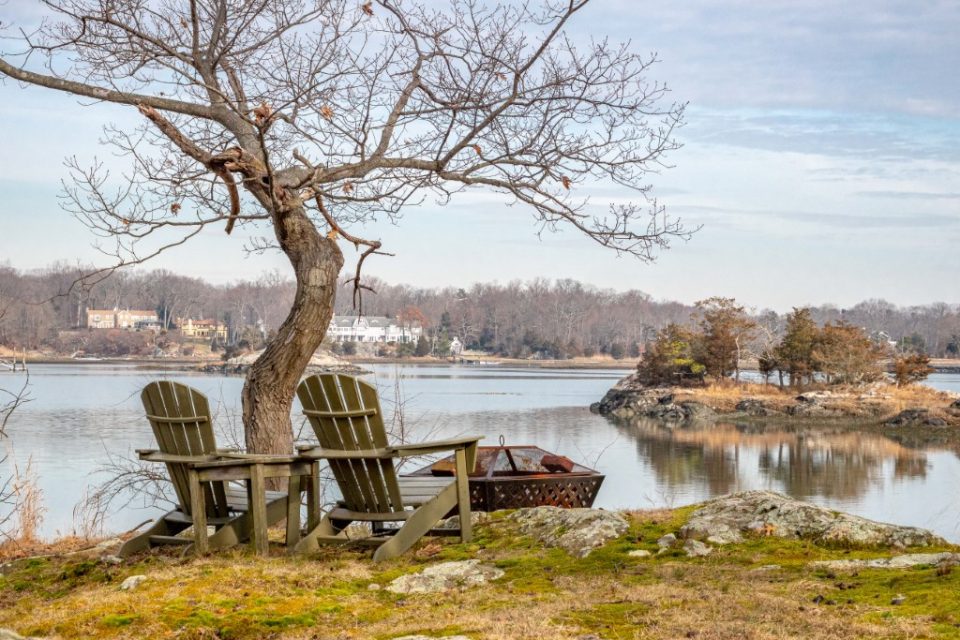 An ideal spot for end-of-day sundowners.

Explore all 60 acres on horseback or go on a boating adventure.

One of America’s last family-owned Gilded Age mansions has hit the market at $100 million.  Located in Darien, Connecticut on an island on Long Island Sound, the 60-acre Great Island is the largest private island ever to be offered for sale on the East Coast. Built in 1902 and then purchased in the early 1900s by baking powder entrepreneur William Ziegler, the compound has remained in the Ziegler family since William bought it.

The 13,000-square-foot Great Island main house has 10 bedrooms and eight baths on over a mile of Long Island Sound waterfront.  The estate has multiple additional properties, including a guest house, 19th-century farmhouse, caretakers cottage and a picturesque seaside cottage. There is a long list of amenities such as a pool and sand beach, a deep-water dock that can accommodate a 100-foot-yacht, and equestrian facilities that were designed by Rafael Gustavino - known for his work on the Biltmore Mansion, Grand Central Station and the Cathedral of St. John the Divine. Great Island equestrian features include an 18-stall granite stable, indoor and outdoor riding rings, a polo field, riding trails and many paddocks. One of the Ziegler family descendants is William Steinkraus, who was an Olympic show jumping champion and Olympic gold medal winner at Mexico City in 1968. In the 1930s, architect-to-the-super-rich, Addison Mizner, did renovations to the home.

With its proximity to New York City’s financial center, Connecticut was a hotspot for grand mansions in the late 1800s and early 1900s, including the 15,000-square foot Lauder Greenway Estate in Greenwich, built in 1896 for insurance executive John Hamilton Gourlie. Lauder Greenway was the most expensive home in the United States when it sold in 2014 for $120 million.

Similar to the story for many of the Gilded Age mansion owners, Ziegler bought the estate as a summer home to escape New York City’s heat. The massive mansions, built for families such as the Rockefellers, Vanderbilts and Astors, were sometimes called “summer cottages” with owners who were often competing to claim the largest and most extravagant homes.  Very few of the Gilded Age mansions are still owned by private families, most have been demolished for their land, burned down or donated to schools and non-profit institutions.

Darian has attracted many actors, entertainers, authors, artists, designers, inventors and musicians over the years, indicating its motivational vibe for creatives and thinkers.   Author Anne Morrow Lindbergh and her husband, Charles, lived quietly and privately there after the highly publicized kidnapping and murder of their first son, Charles.  Buckminster Fuller, designer of the geodesic dome and the Dymaxion car lived there from the 1930s until his death in 1983.

The listing is held by Jennifer Leahy of Douglas Elliman, Greenwich, Connecticut. 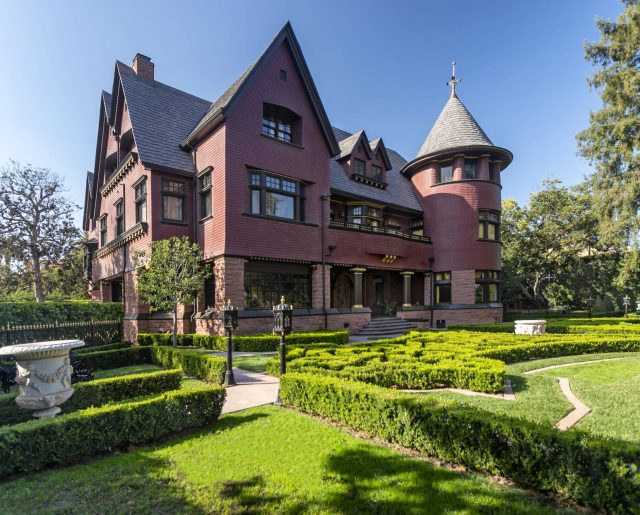 Best known for her TLC reality show LA Ink, which chronicled her work as a tattoo artist and tattoo studio...Read More