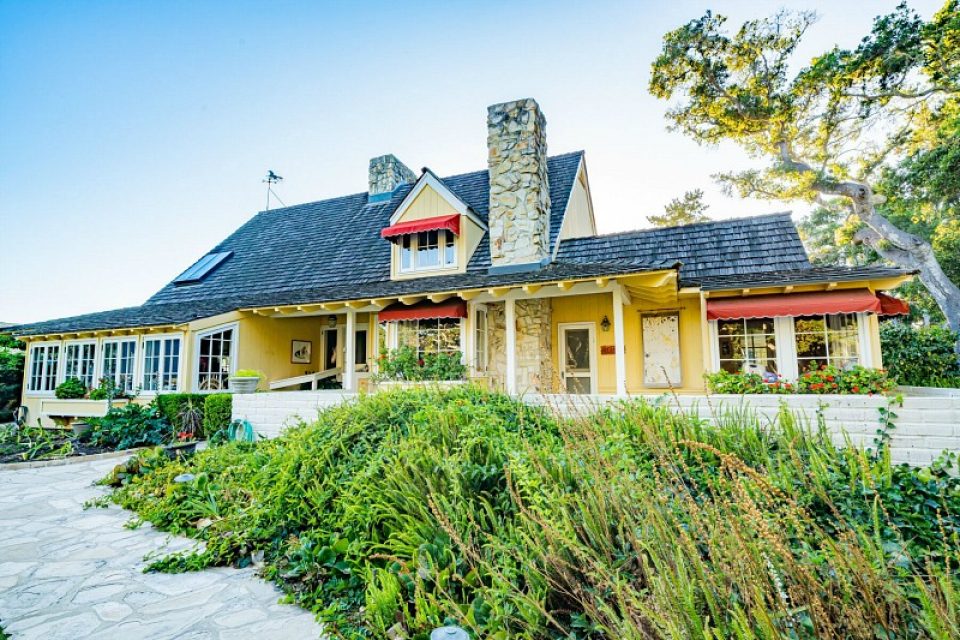 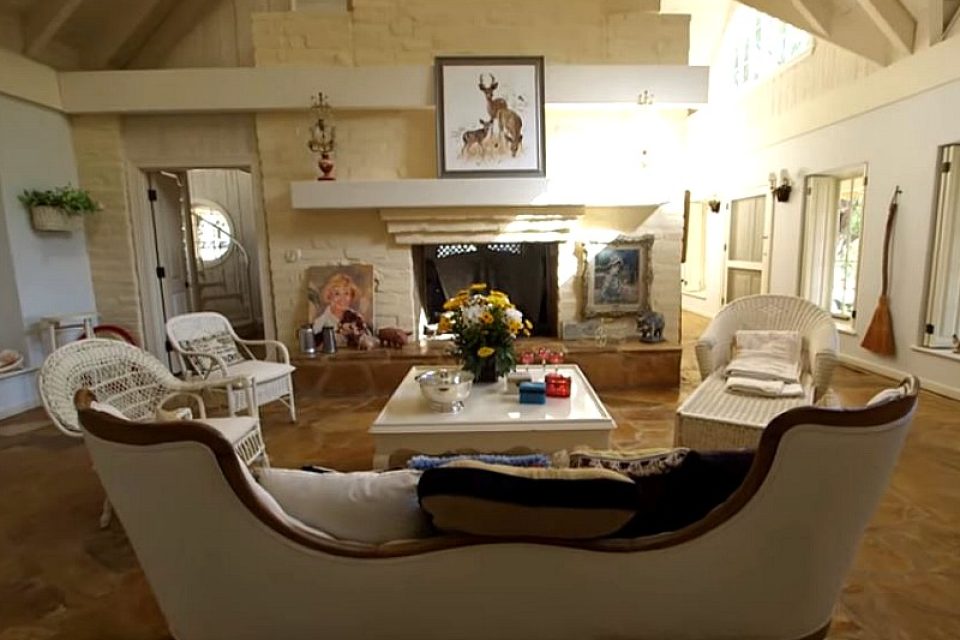 Doris Day’s perky personality, great singing voice and good looks made her America’s most popular singer-actress for most of the 1950s and 60s. 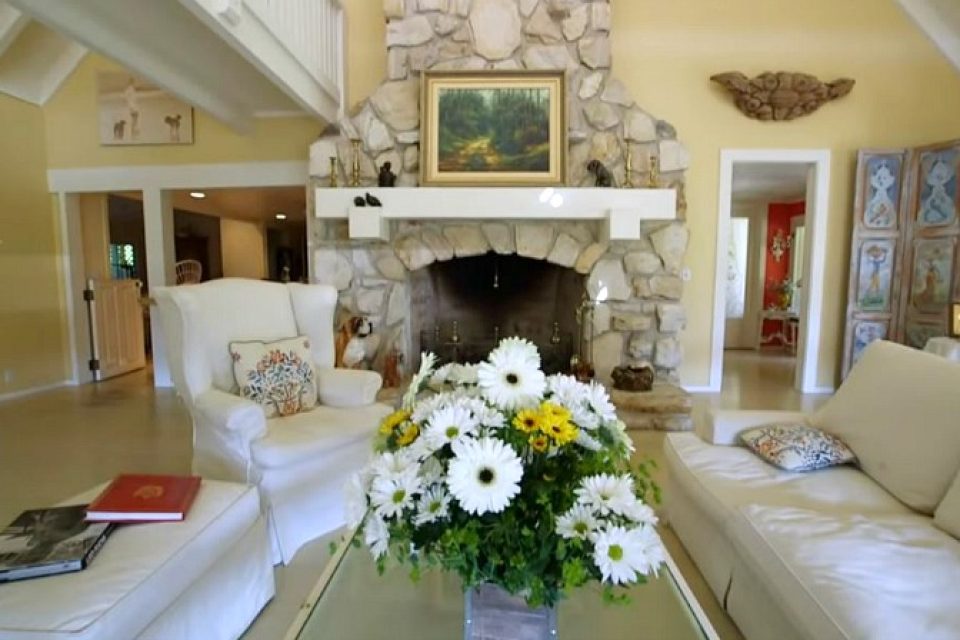 This is the house where Doris lived for forty years until her death in 2019 at age 97. 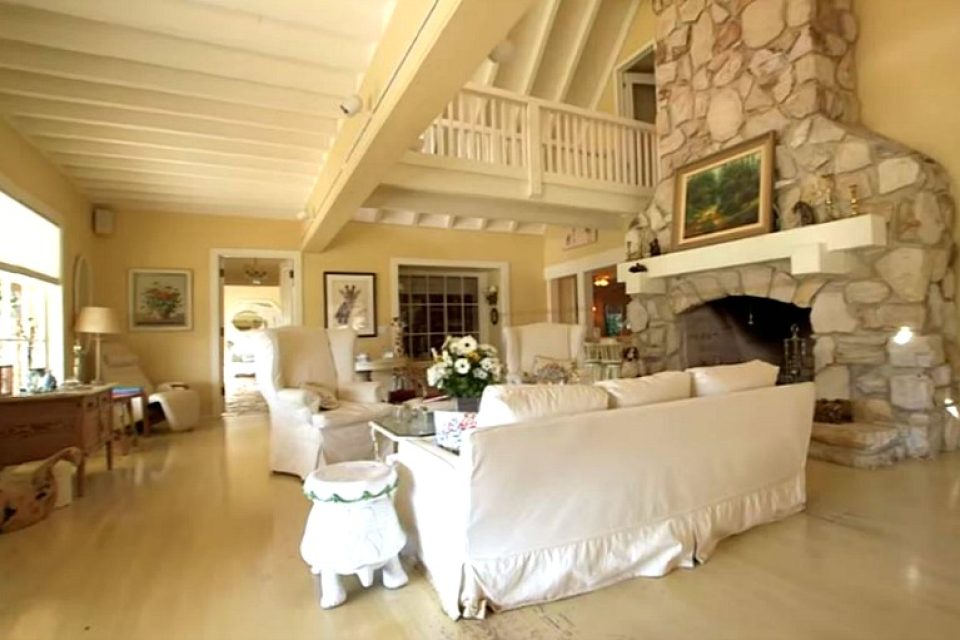 The house overlooks the Carmel Valley and the Quail Lodge Golf Course. 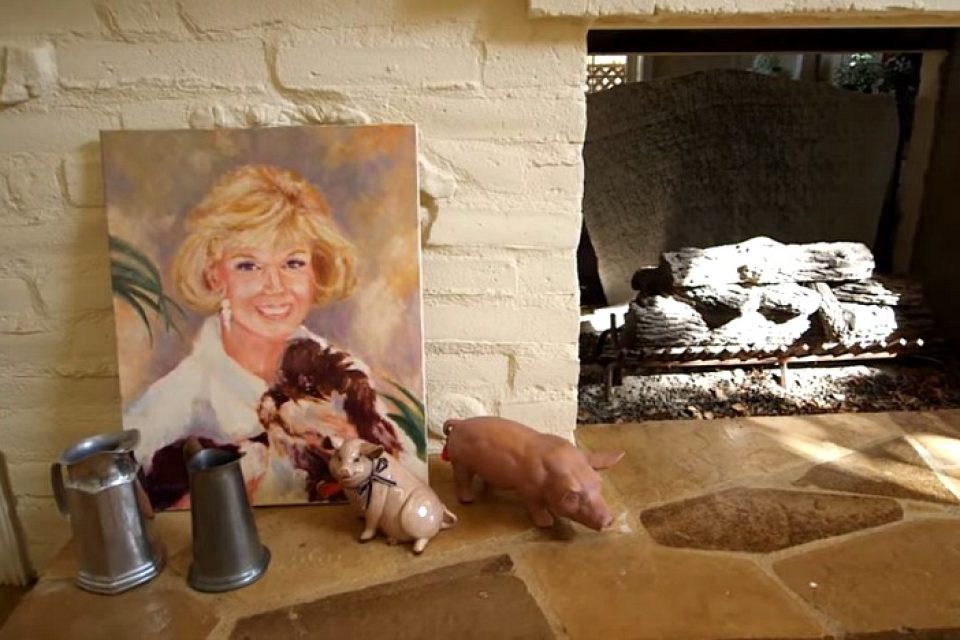 A well known animal lover, the grounds had comfortable facilities for both dogs and cats. 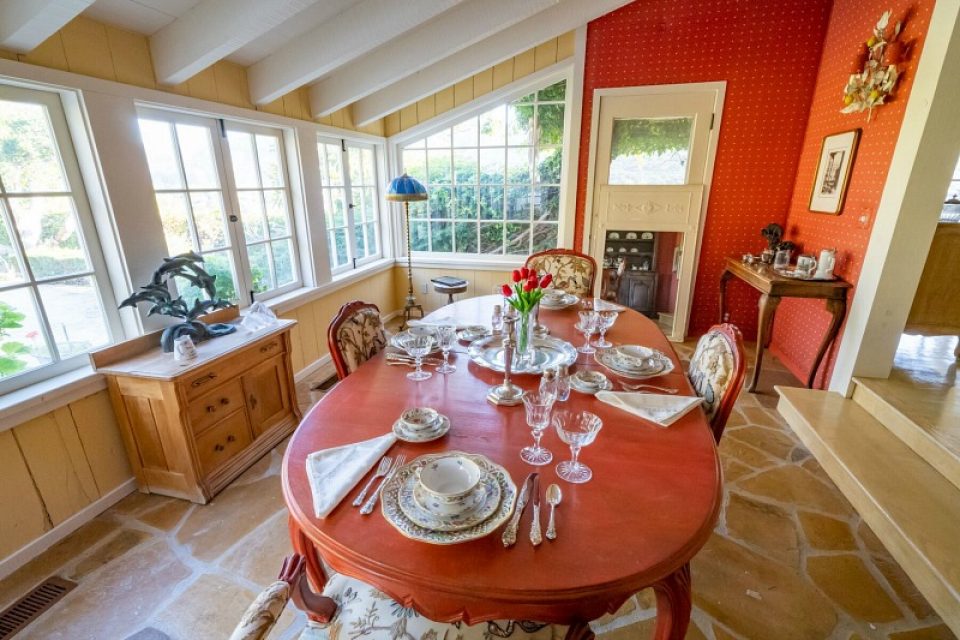 The cheerful accent color of red is seen in many informal areas of the house. 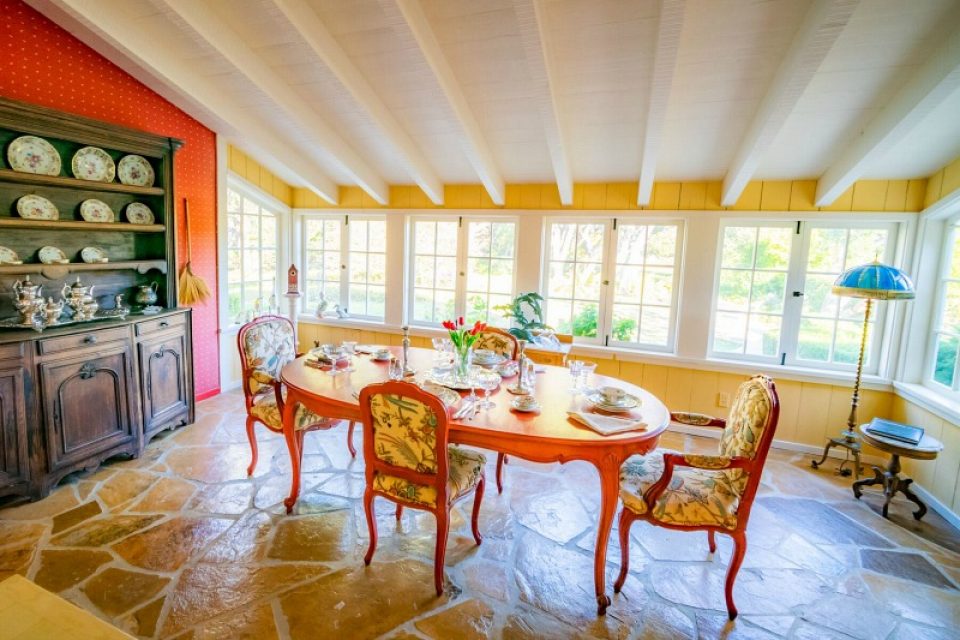 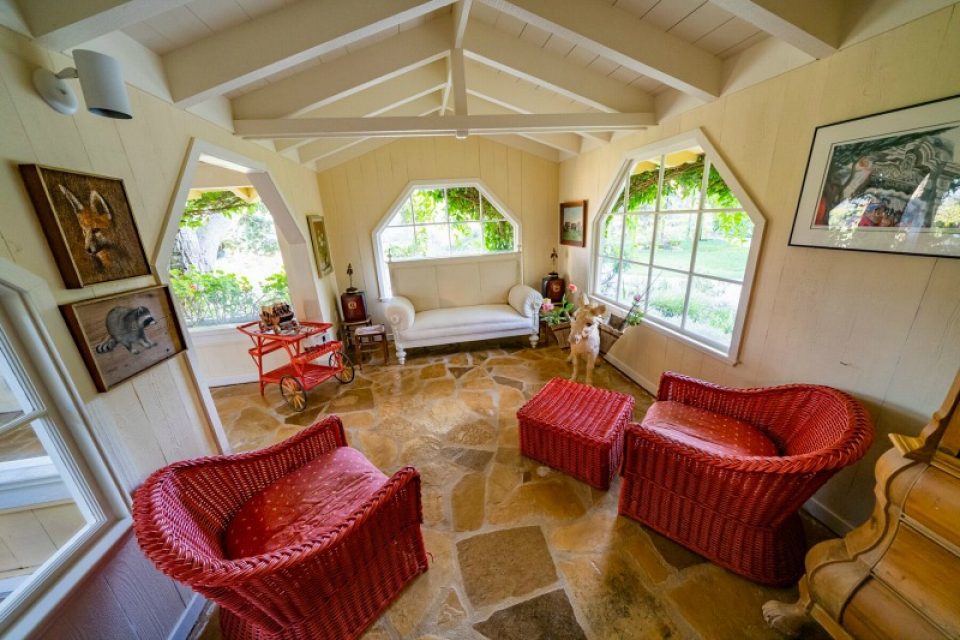 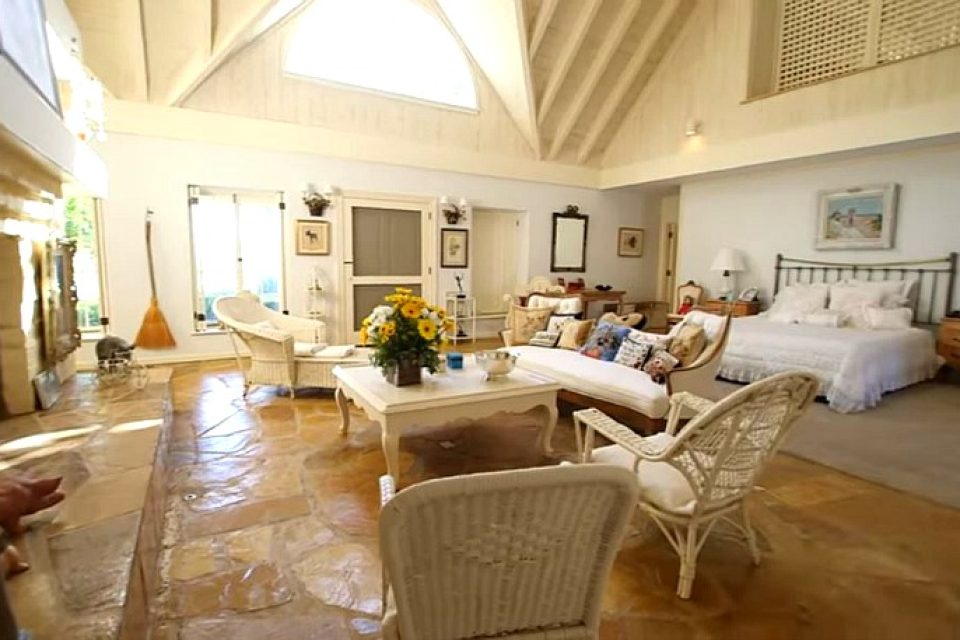 Divided between three structures there are six bedrooms and nine baths within a total of 12,400 square feet.

Many still remember the late Doris Day for her Christmas albums and shows when she sang all the holiday favorites and the whole family huddled in front of the television with a roaring fire in the fireplace.  Though she might have been singing about Christmas with snow falling and people enjoying the store window decorations in the city, she was living in California’s endless sunshine with her beloved dogs and cats in Carmel.  Her cheerful yellow house in one of the state’s most charming towns was listed at $7.4 million, but with a price reduction, it has recently sold for $5.7 million - a little over two years after her death.  As she wished, all proceeds will go to the Doris Day Animal Foundation.

Born and raised in Cincinnati where she got her start as a big-band singer on local radio stations and in nightclubs, Doris Day’s perky personality, great singing voice and good looks made her America’s most popular singer-actress for most of the 1950s and 60s.  She sang on the radio, produced albums and starred in films such as Calamity Jane and Alfred Hitchcock’s The Man Who Knew Too Much, and had her own The Doris Day Show on television until 1973.  It was then, at the age of 51, that Doris retired from show business.  She had appeared in 39 films, recorded over 600 songs, and received an Academy Award nomination for Pillow Talk.

This is the house where Doris lived for forty years until her death in 2019 at age 97.  Sited on nine acres atop a knoll, the 7,000-square-foot home overlooks the Carmel Valley and the Quail Lodge Golf Course.  Also on the oak-studded grounds are a guest house and a gatehouse with two apartments.  The color butter yellow was another of her favorite things and she painted the home and guest house in the warm-and-welcoming color. Her accent color of choice was red which she used on the gatehouse.  Divided between the three structures there are six bedrooms and nine baths within a total of 12,400 square feet. Rooms are sunny and bright with lovely views from the many windows, balconies and terraces.

Carmel-by-the-Sea is a village-type of town on the Monterey Peninsula that has drawn artists, writers and actors for decades.  It is also known for having quirky municipal codes, which include prohibiting wearing shoes with heels taller than two inches without a special permit, and a ban on chain restaurants.  Dogs also are allowed to accompany their owners inside restaurants and retailers as well as enjoying a frolic on the beach - city policies that were brought to fruition by Ms. Day. 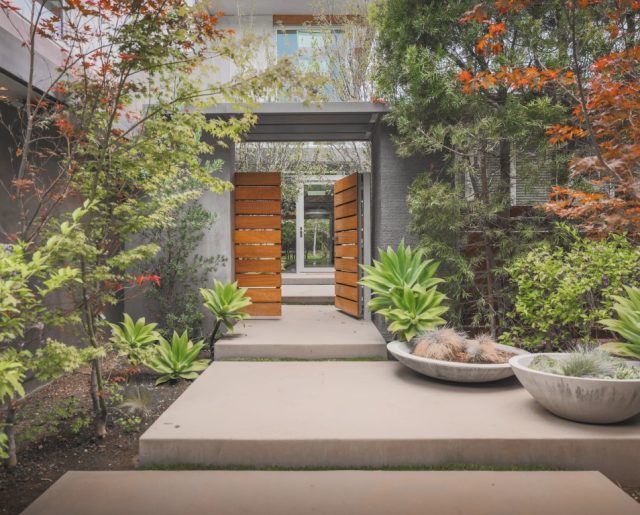 The Seidenbaum Residence, a home designed by Richard Dorman, has been listed by the American Institute of Architects as among...Read More