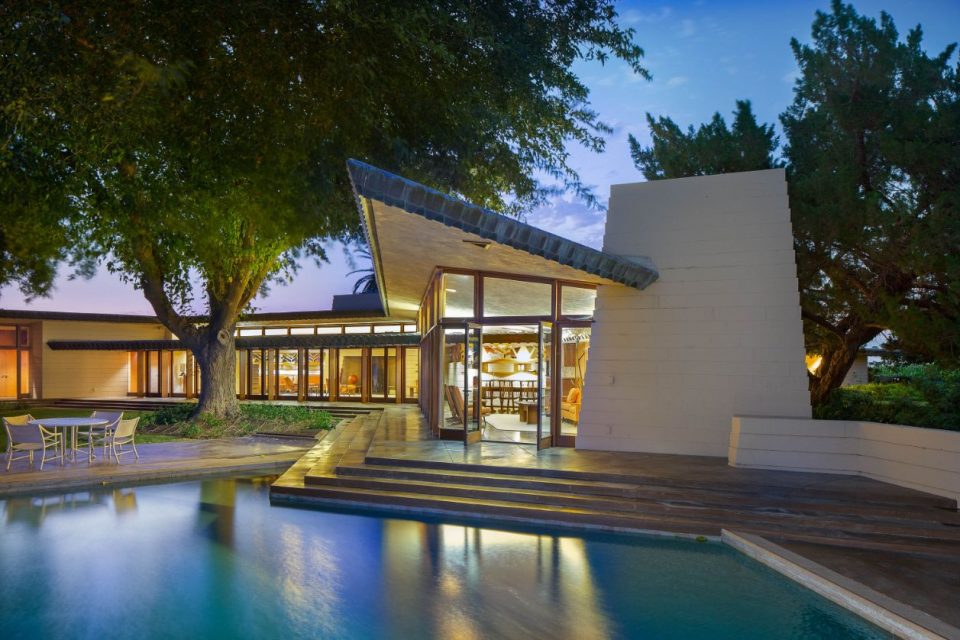 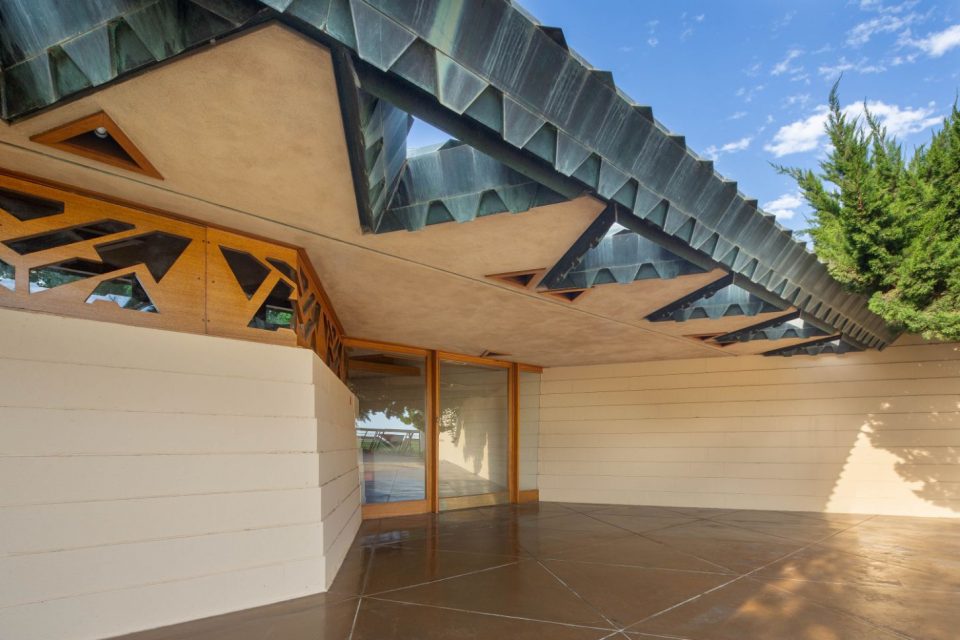 A unique geometric motif recurs throughout the home. 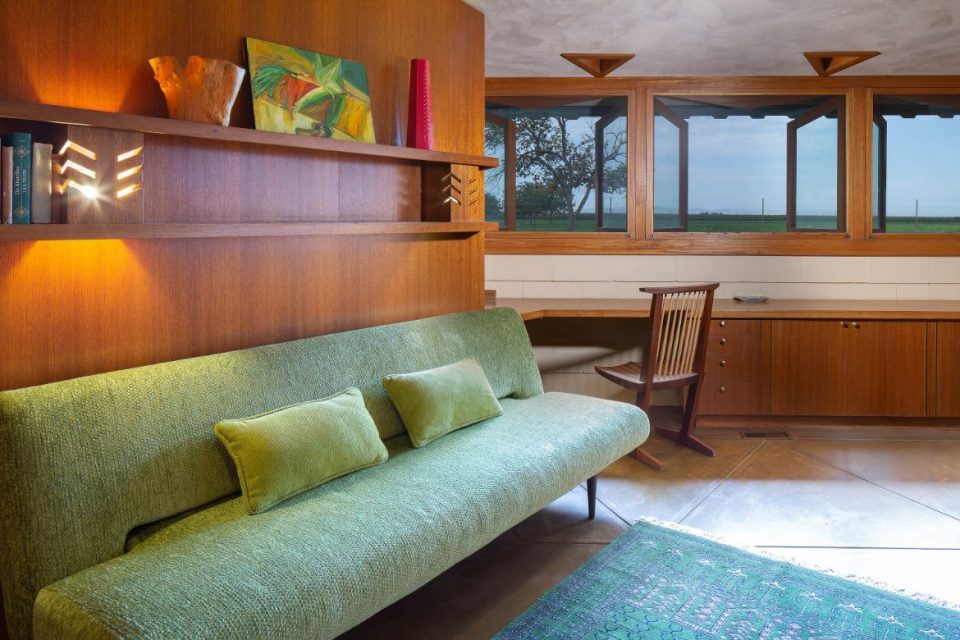 The period look has been meticulously maintained. 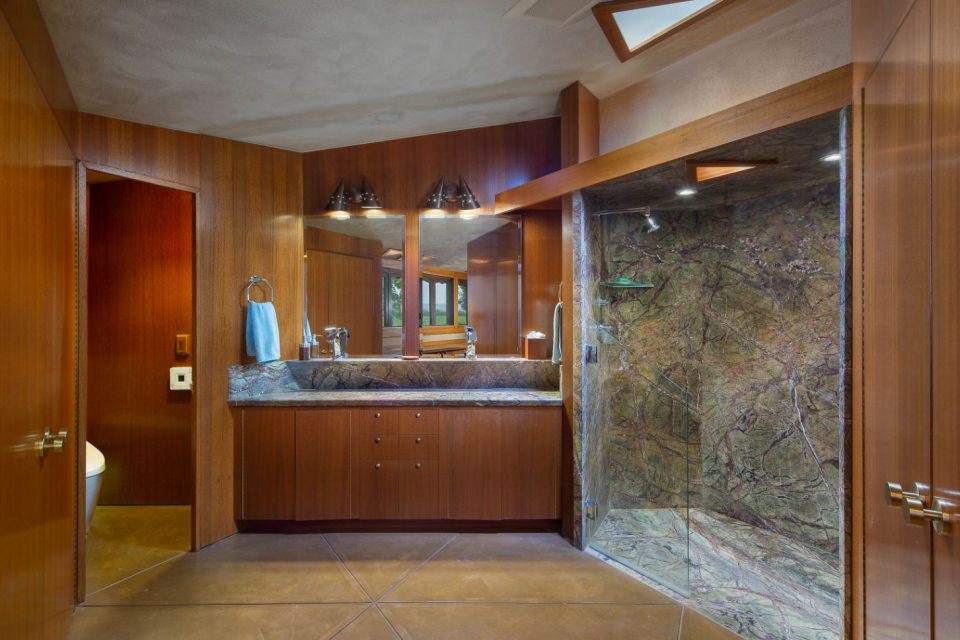 Marble and hardwoods enhance the shower. 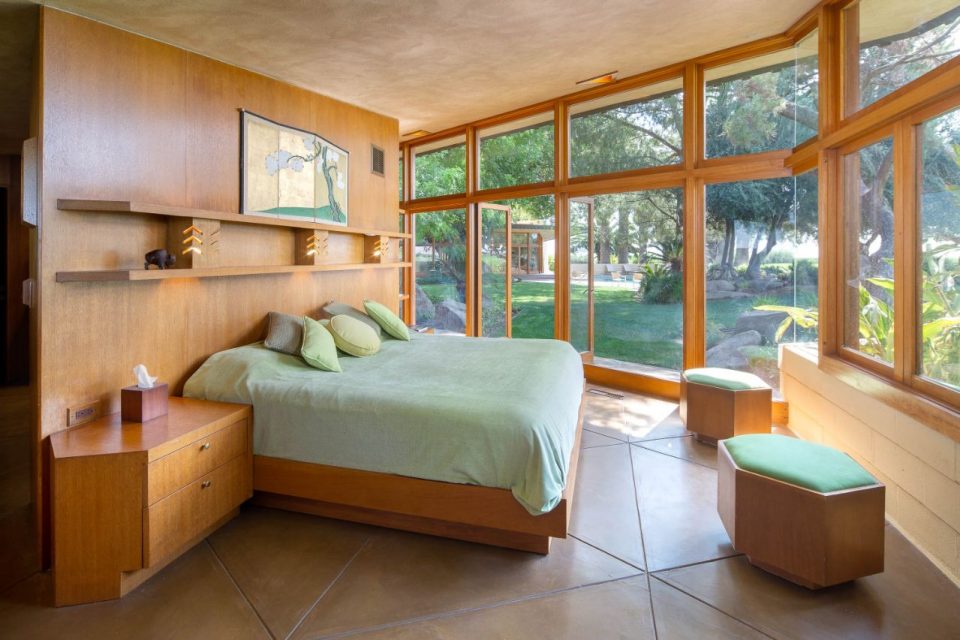 The master suite has tranquil views. 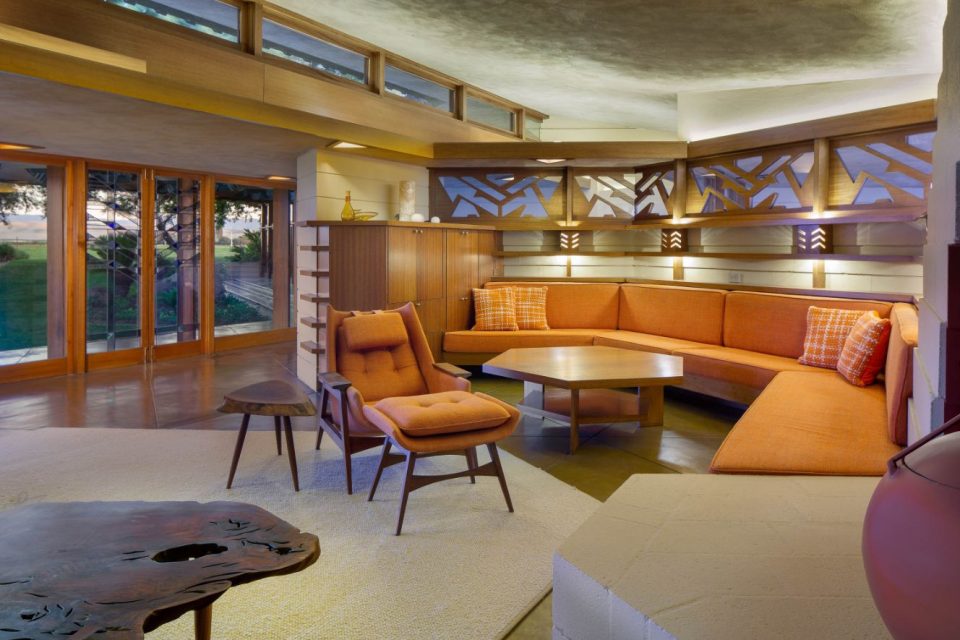 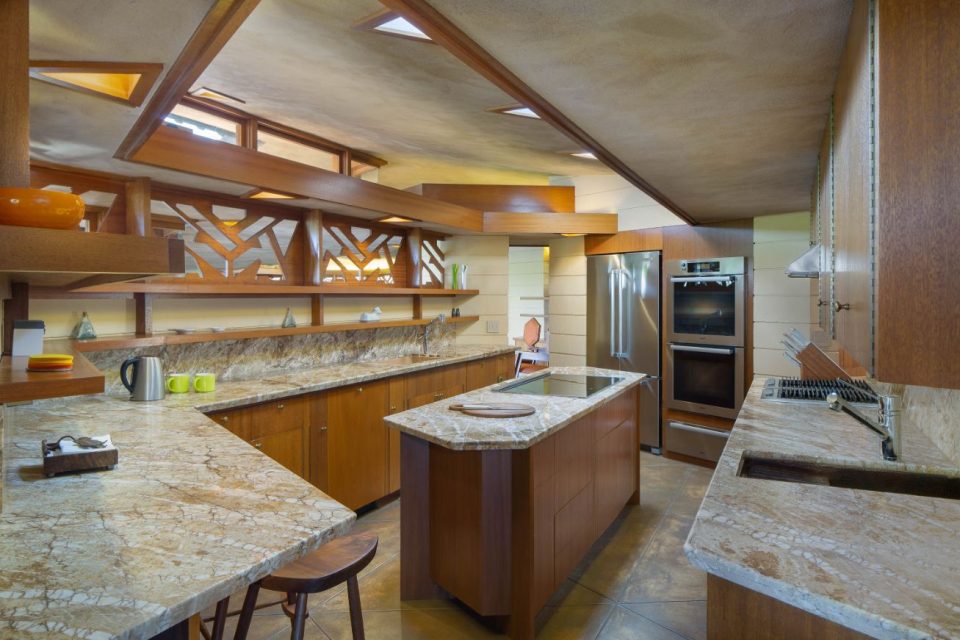 The kitchen is spacious with a stone-topped island. 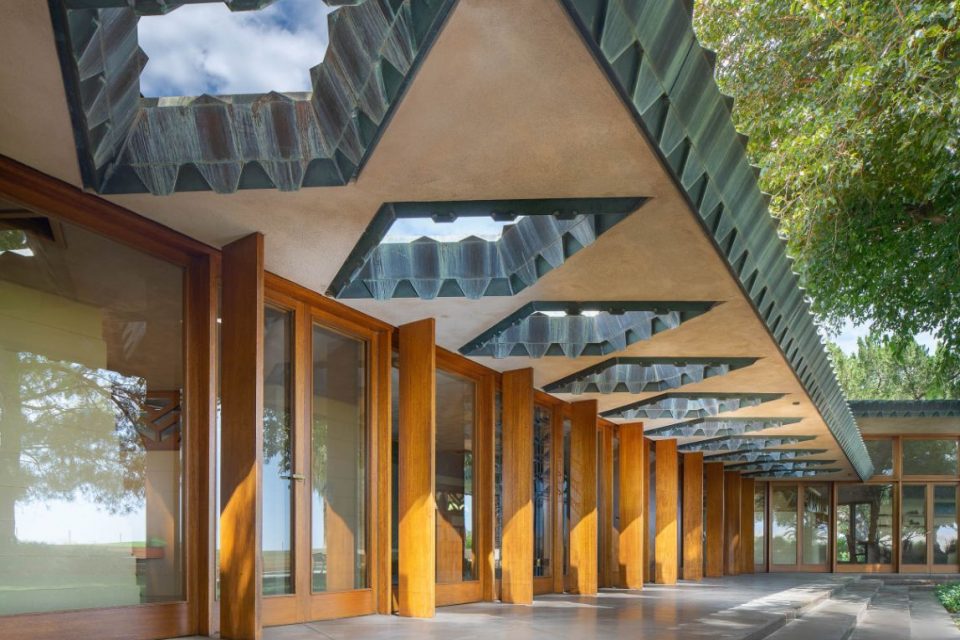 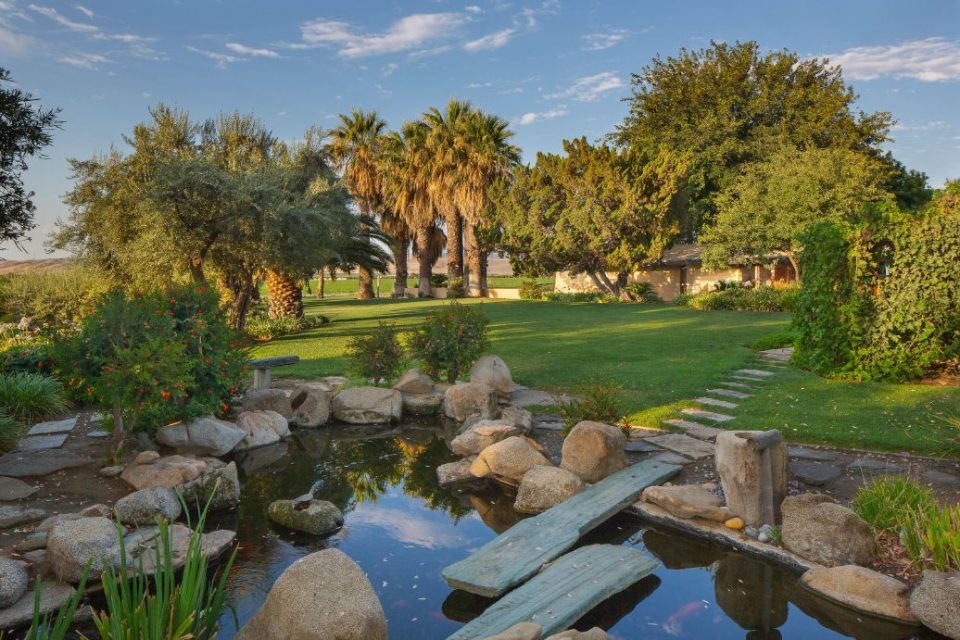 The farm's 96 acres include gorgeous gardens. 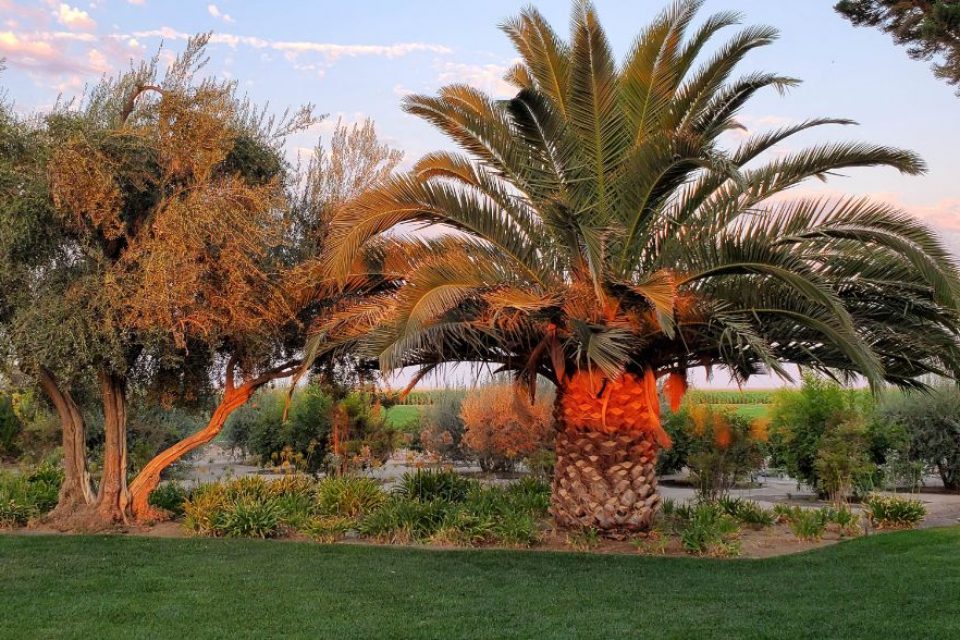 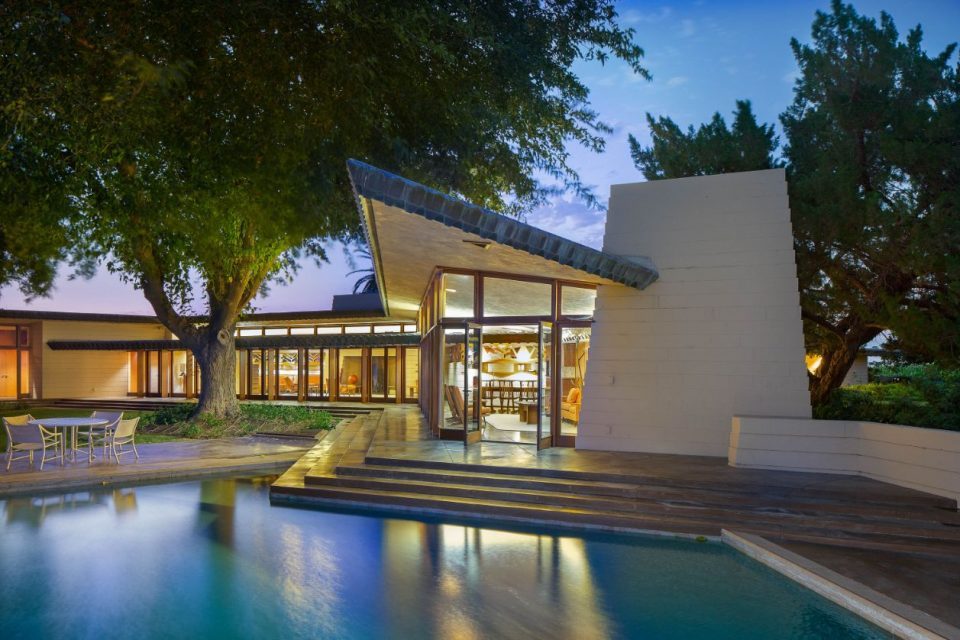 America’s most famous architect, Frank Lloyd Wright, designed over 1,000 structures and pioneered the Prairie School of architecture. Marked by flat roofs with overhanging eaves, windows grouped in bands, and horizontal lines meant to evoke the vast, flat expanses of America's native prairie landscape, Wright believed in designing in harmony with nature - a philosophy he called organic architecture. The Prairie style was Wright’s attempt to create a uniquely American design. It was most popular in the Midwest where Wright was born and did most of his work. Wright’s most famous work in his 70-year career is Fallingwater in Pennsylvania. Built over a waterfall, it epitomizes organic architecture and the Prairie School. Fallingwater was designated a UNESCO World Heritage Site along with seven other Wright homes.

One of Wright’s final projects was a stately home on a 96-acre ranch in Los Banos, California known as The Fawcett Farm. Considered a “Usonian” home, a word coined by the architect to describe the New World character of America’s architectural landscape, it belongs to a group of 60 single-family homes designed in the latter part of Wright’s career. Melding elements of the mid-century-modern style with Wright’s Prairie School, the house was completed two years after Wright’s death in 1959. The house’s original owners, Stanford football-star Buck Fawcett and his wife, built the home themselves from Wright’s plans. Meticulously preserved and restored in consultation with Frank’s grandson, architect Eric Lloyd Wright, the estate is being offered for sale at $4.25 million.

Both the master bedroom and the entertaining spaces open onto the property’s outdoor pool deck and patio area. In addition to a gorgeous recessed pool, the landscaped grounds include palm trees, stone walkways, a Japanese garden, and a koi pond with a waterfall. The bulk of the acreage is devoted to cropland, providing an opportunity for commercial agricultural production. The property is also zoned for horses. A detached workshop and a small museum complete the estate, which is fully gated and protected by modern security systems.

Los Banos, in California’s San Joaquin Valley, is known for its fertile agricultural land and friendly community. On the edge of a vast complex of preserved wetlands, it is a haven for waterfowl as well as fishers, hunters and birdwatchers. Numerous hiking trails and outdoor recreation opportunities abound, while a well-preserved historic downtown known as Henry Miller Square offers shopping and dining. 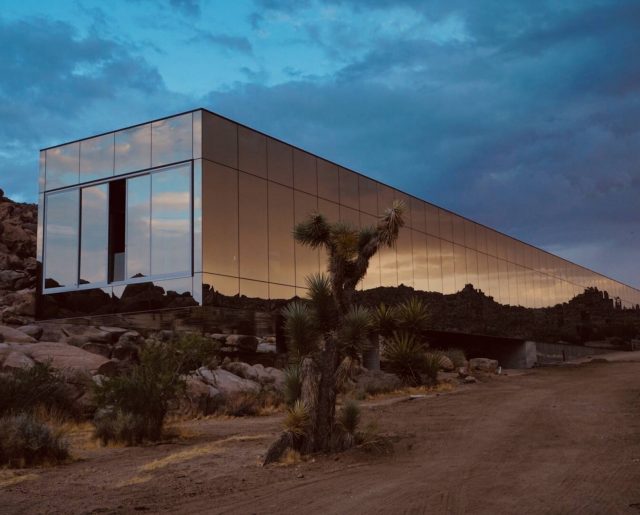 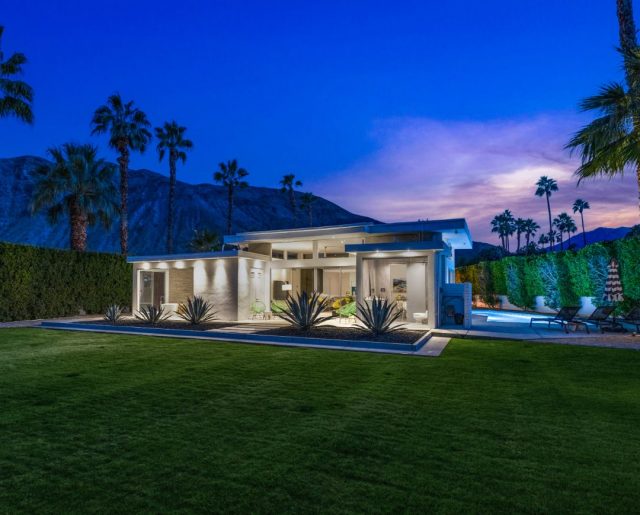