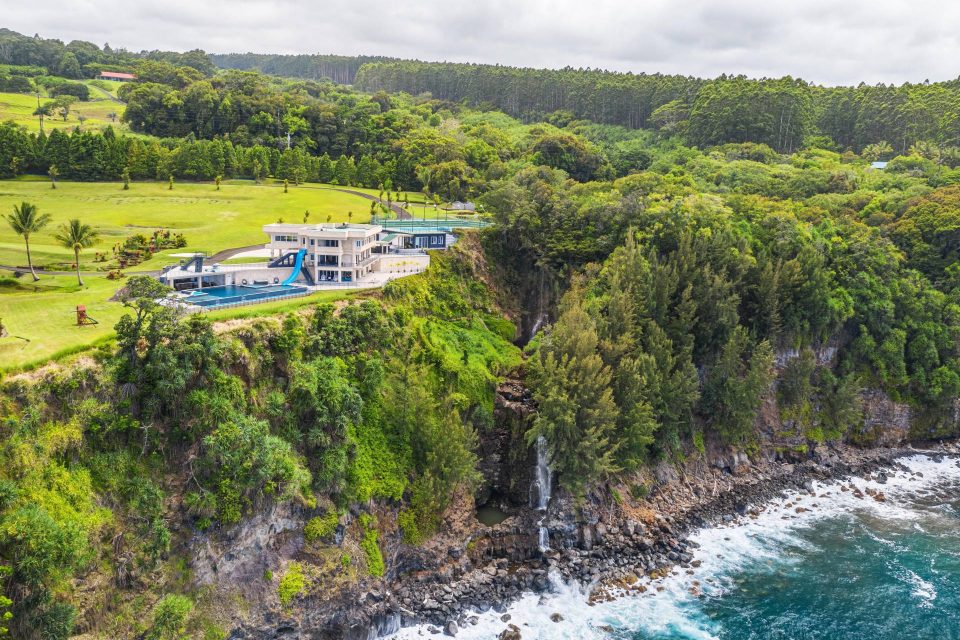 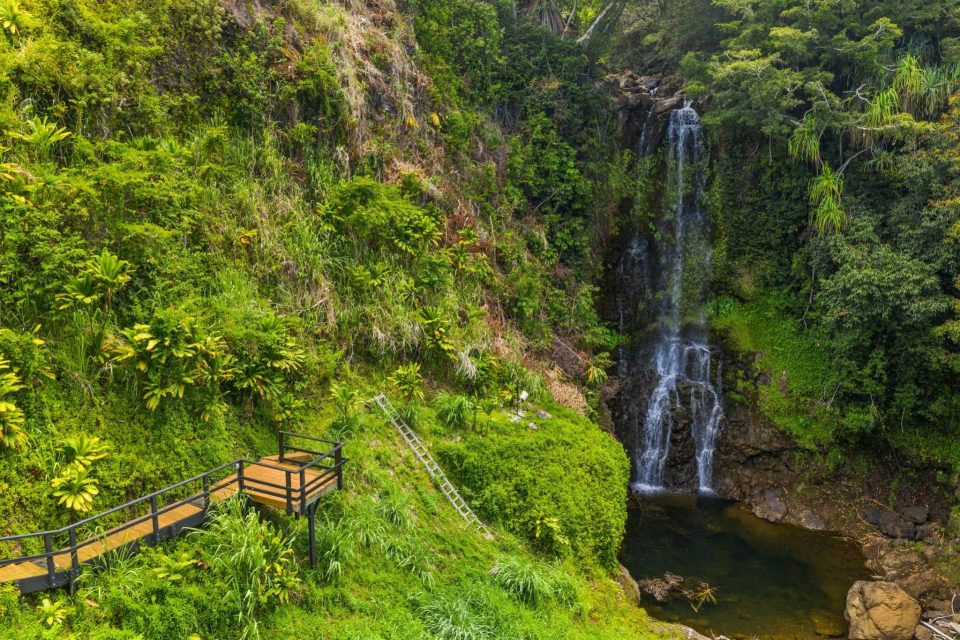 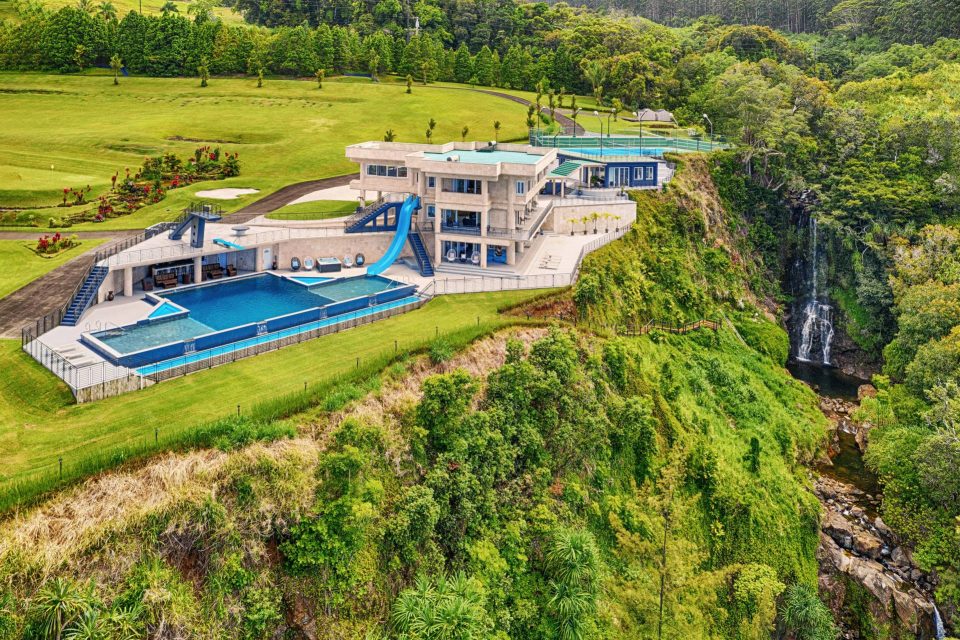 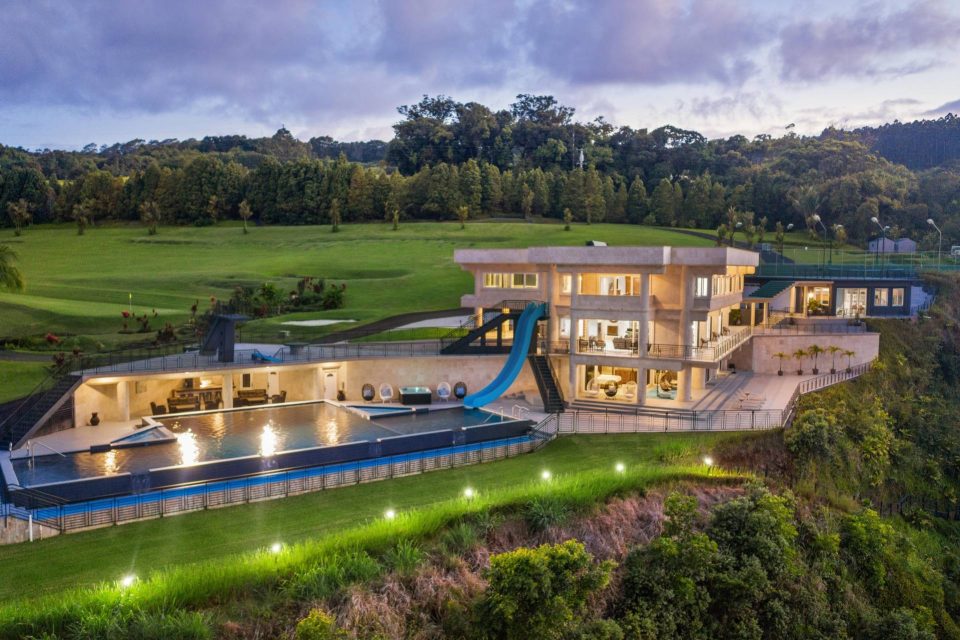 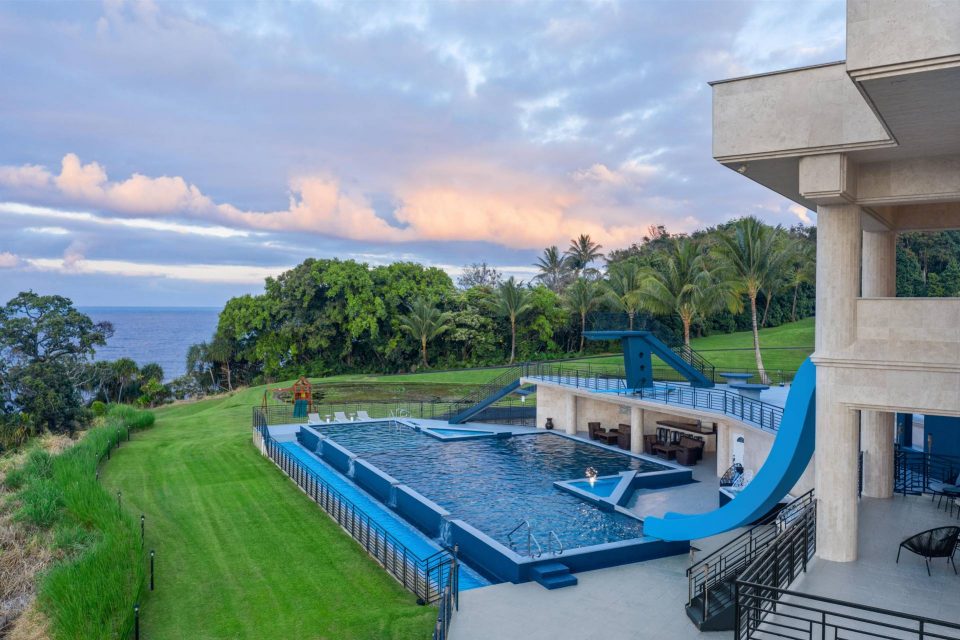 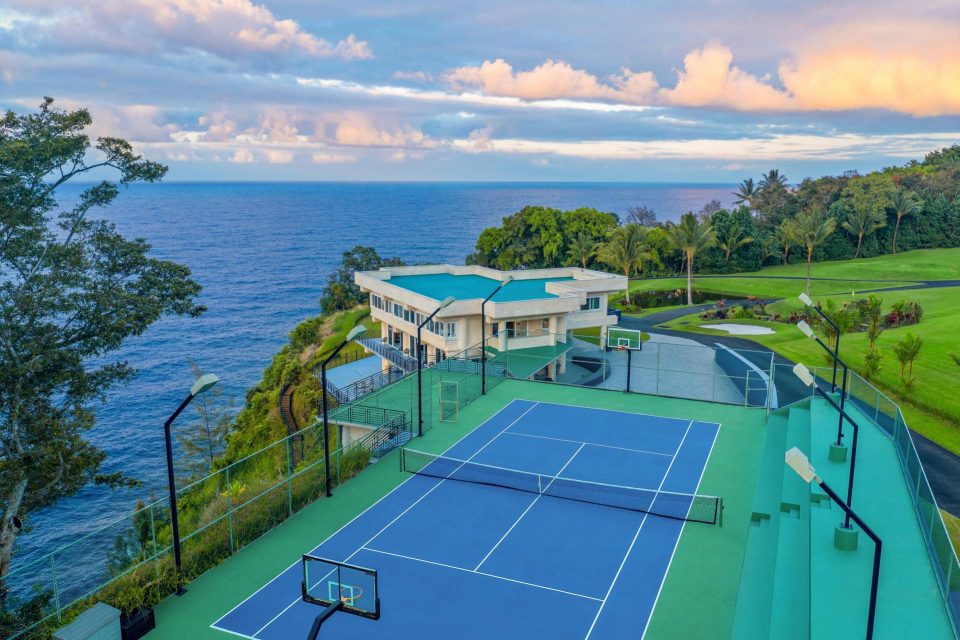 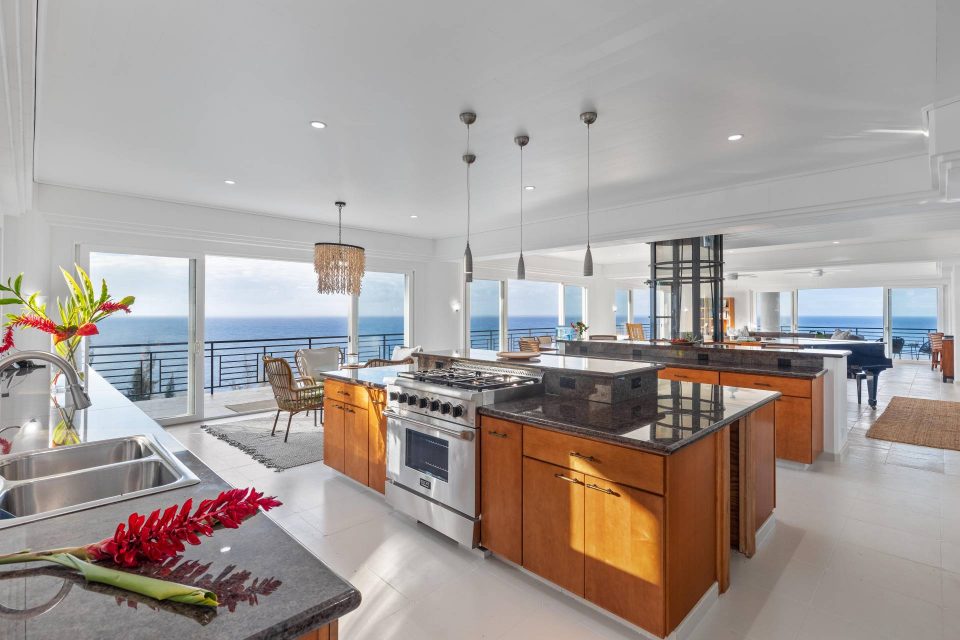 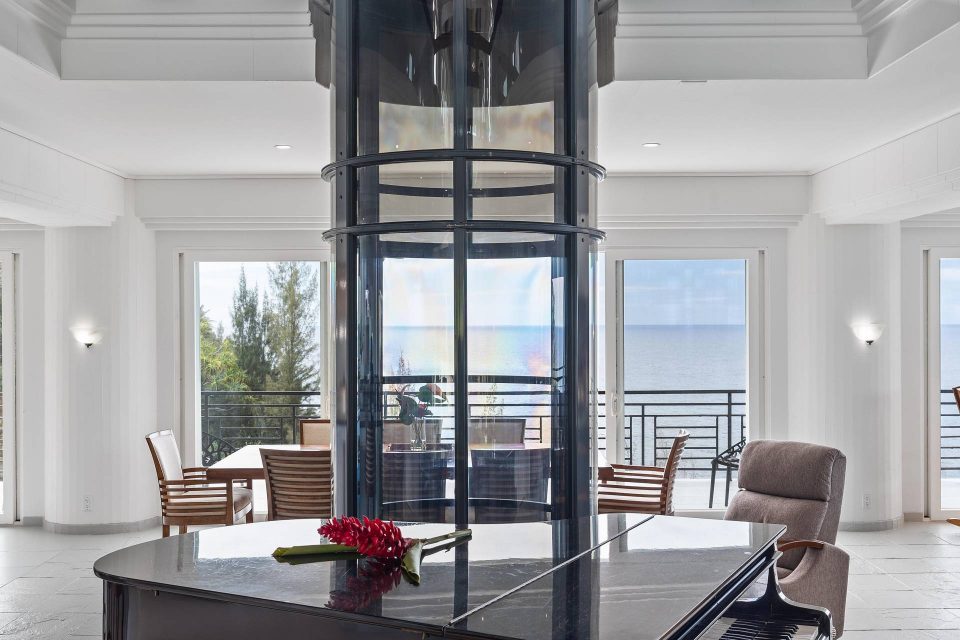 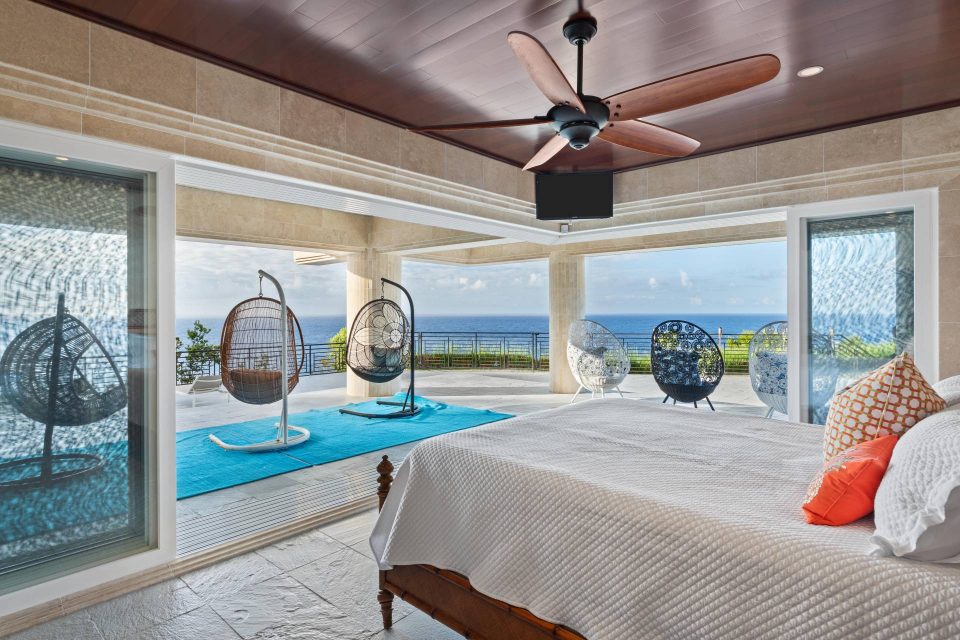 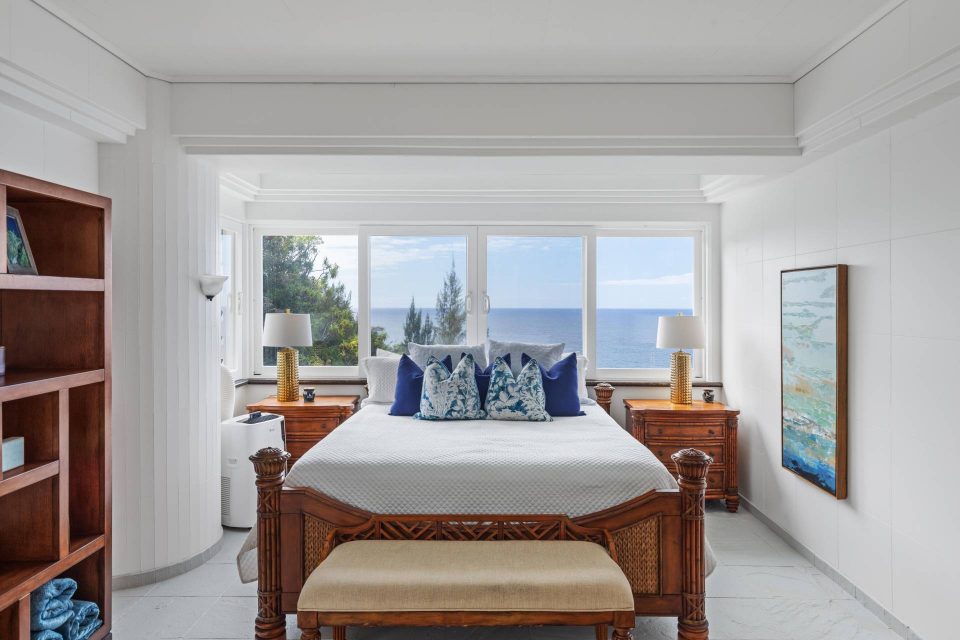 One of Hawaii’s most photographed and celebrity-popular homes with postcard views of a 240-foot natural waterfall, a sports stadium with seating for 450 people, a nine-tee golf course, an aquatic center, a two-story water slide, and some of Hawaii’s best ocean views is going to auction. With a secluded location on the Big Island’s northeastern shore, Waterfalling Estate made gossip-mag headlines in 2016 when Justin Bieber rented the home for two weeks at $10,000 per night for his entourage, which included six skimpy-bikini-wearing models. Also a favorite for tropical reality television, Waterfalling Estate was chosen as the film location for both Love Island and Ex on the Beach and a finalist for HGTV’s Ultimate House Hunt.

Located a few miles north of Hilo on eight acres overlooking where the jungle meets the ocean and the Hamakua coastline, the home has five bedrooms, ten bathrooms and two third-floor master suites with lanai. The main living area, including chef’s kitchen and dining has spectacular waterfall and ocean views. On the aquatic level are two guest suites, a game room, media area, two whirlpools, sauna, shower, outdoor kitchen and dining area. There is a one-bedroom guest house, four-car garage, helipad, plus an outdoor bar.

The Big Island offers a big number of activities and entertainment from stunning beaches such as Laupāhoehoe, Waikiki, and Waipi’o, hiking in the Hilo Forest Preserves or Akaka Falls State Park, zip lining over KoleKole Falls, Volcano National Park, whale watching, jungle jaunts, farmer’s markets, world-class fishing, and unforgettable sunsets. Even more adventure is just a 50-minute plane trip away to Honolulu for less than $100.

Currently listed for $9.95 million, the property will be going to auction September 7th to 9th with a $5.75 million reserve. 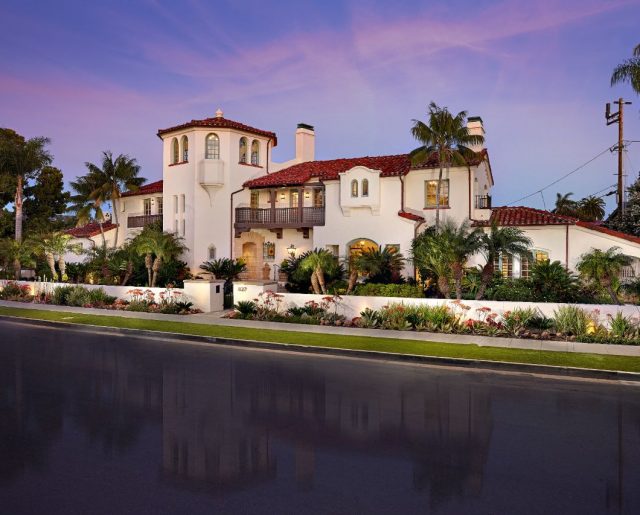 Coronado Island, just off the coast of San Diego, has long been known as a summertime getaway for the rich...Read More