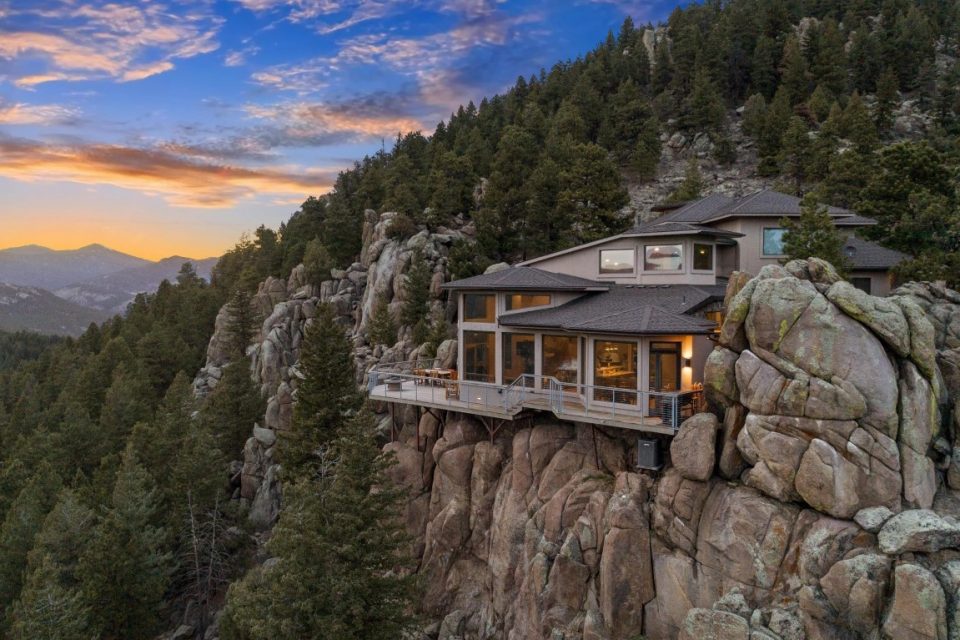 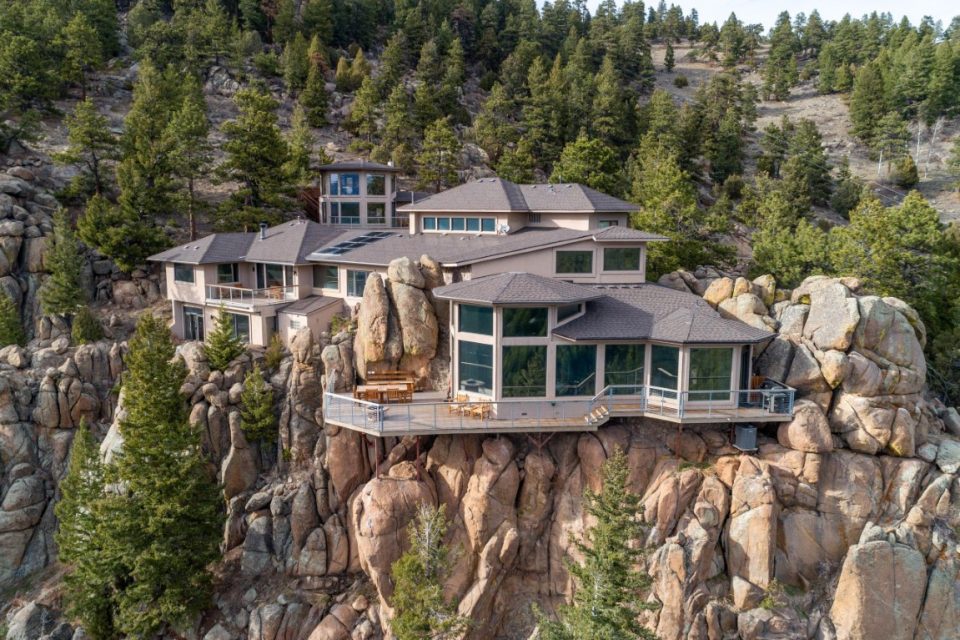 The sturdy setting in and among the boulders allows for decks to be cantilevered over open space. 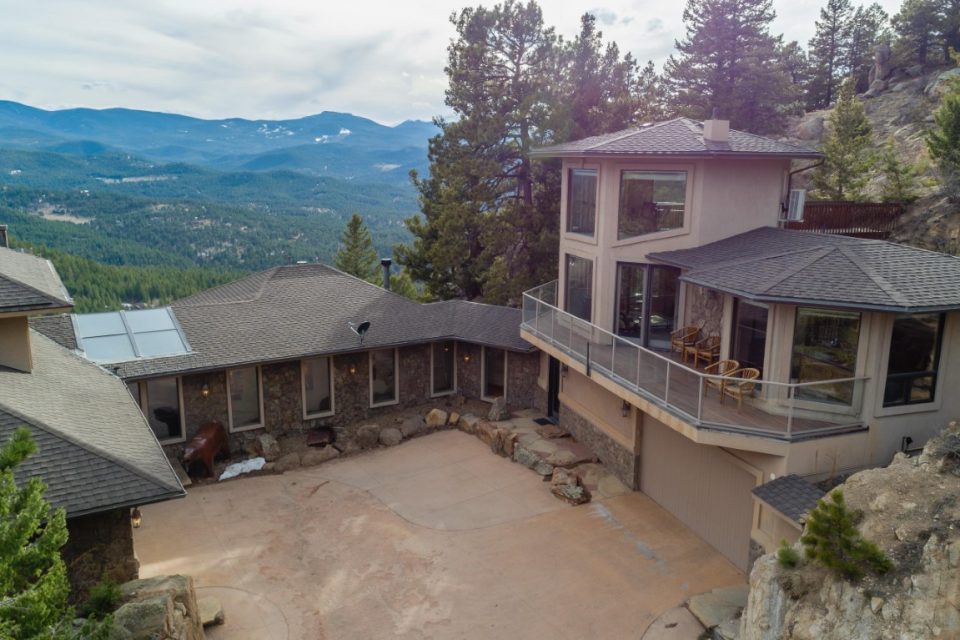 The entry has garages on either side. 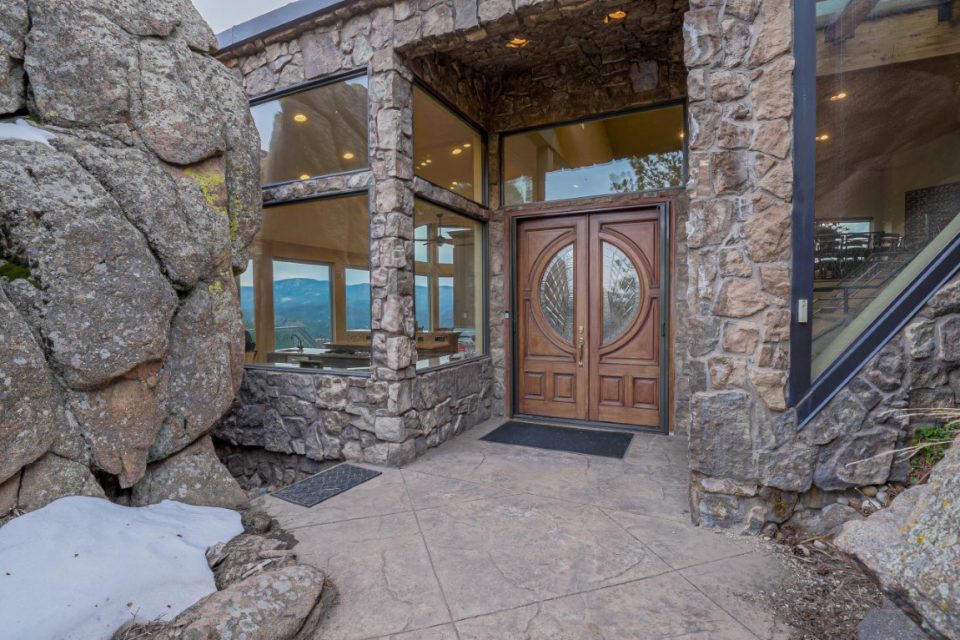 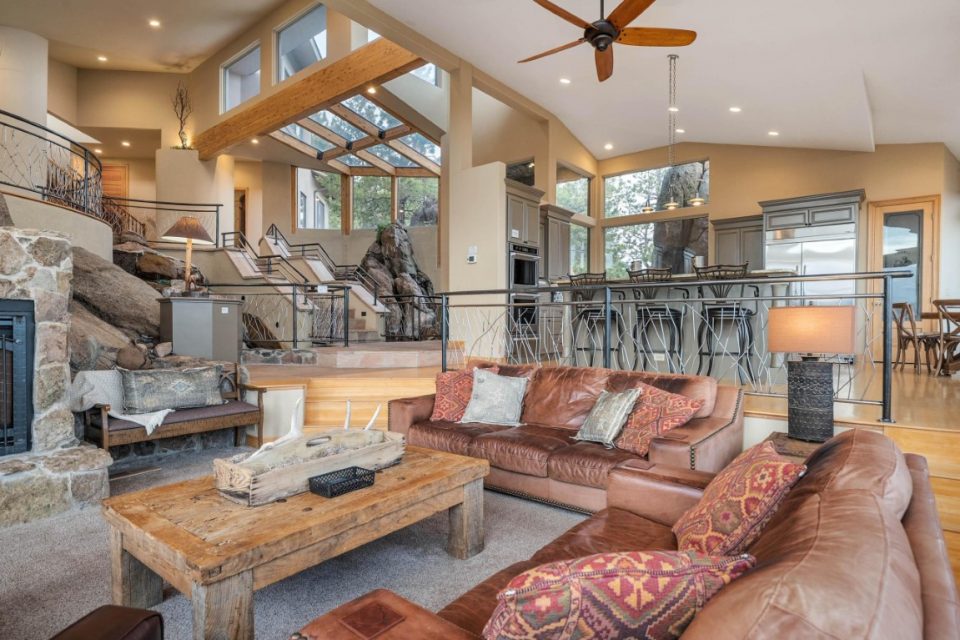 The living room has a fireplace and plenty of light through large windows and skylights. 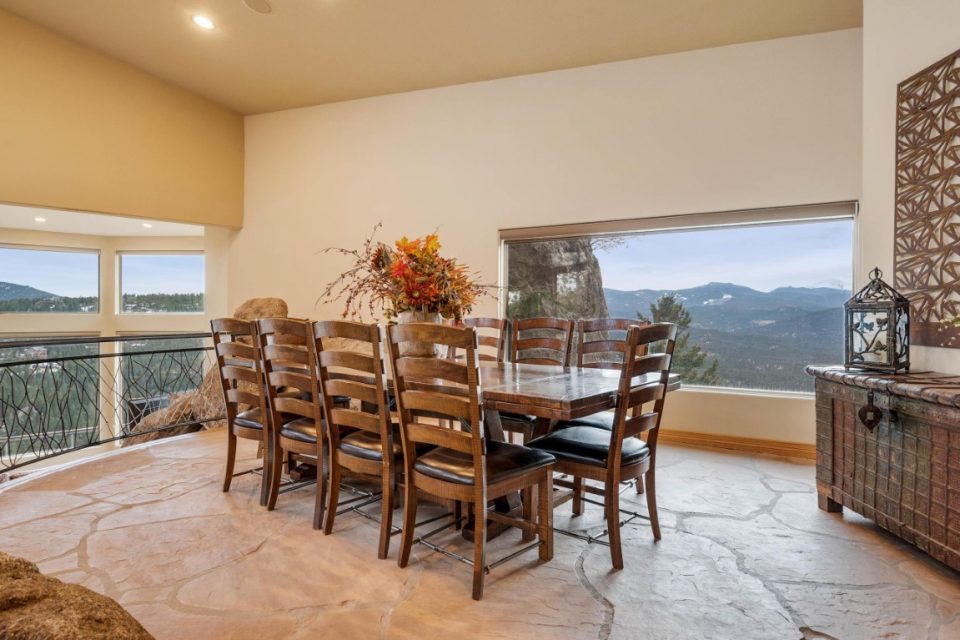 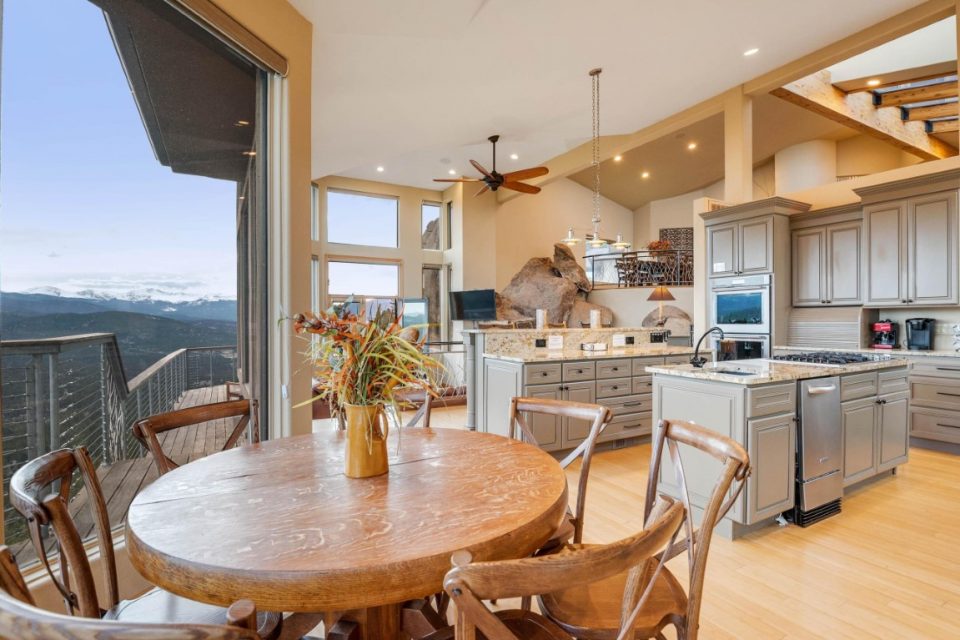 With the same spectacular views, this is one kitchen where the oven temperature must be set with altitude in mind. 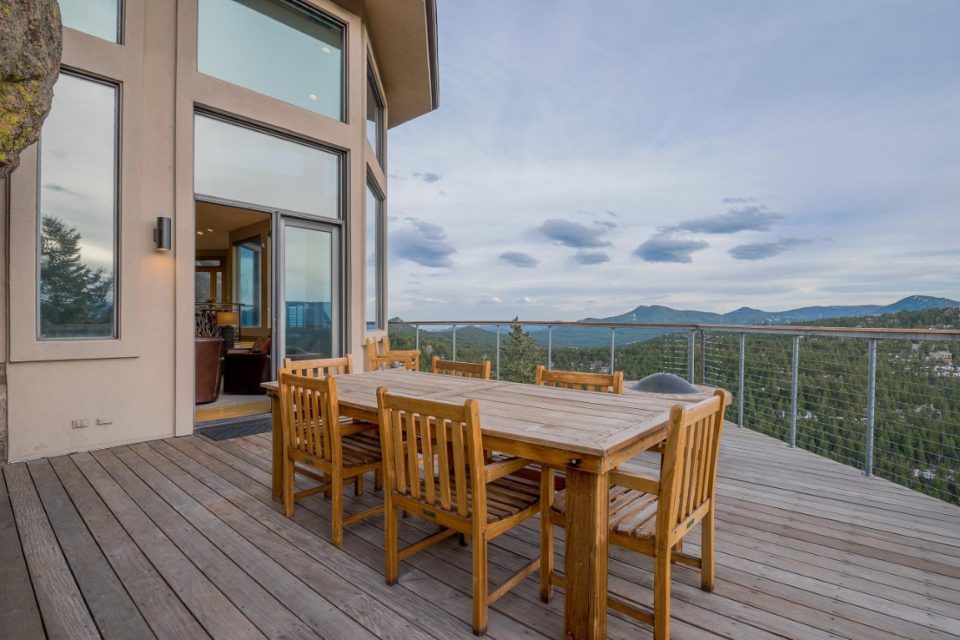 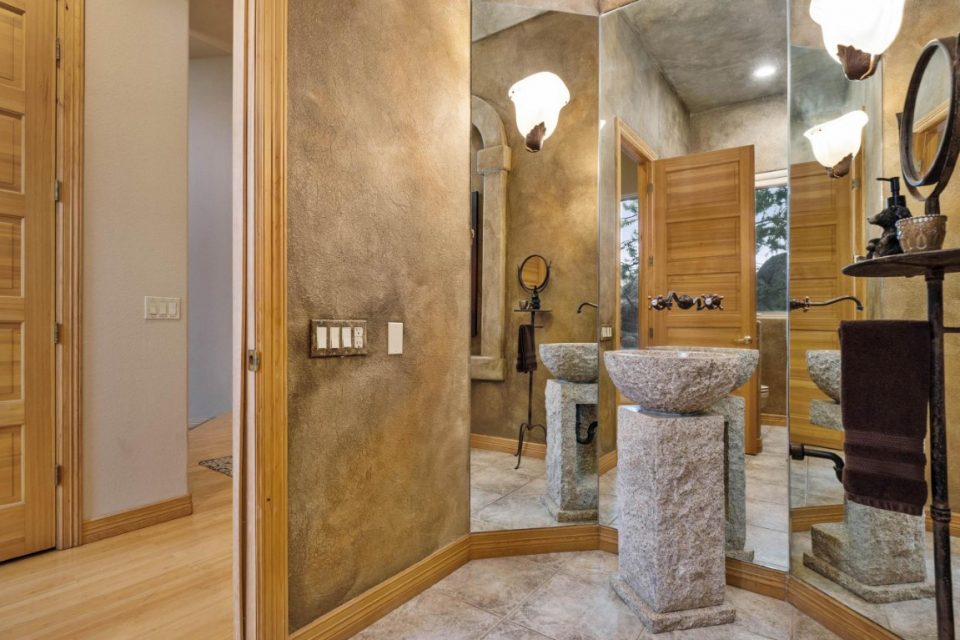 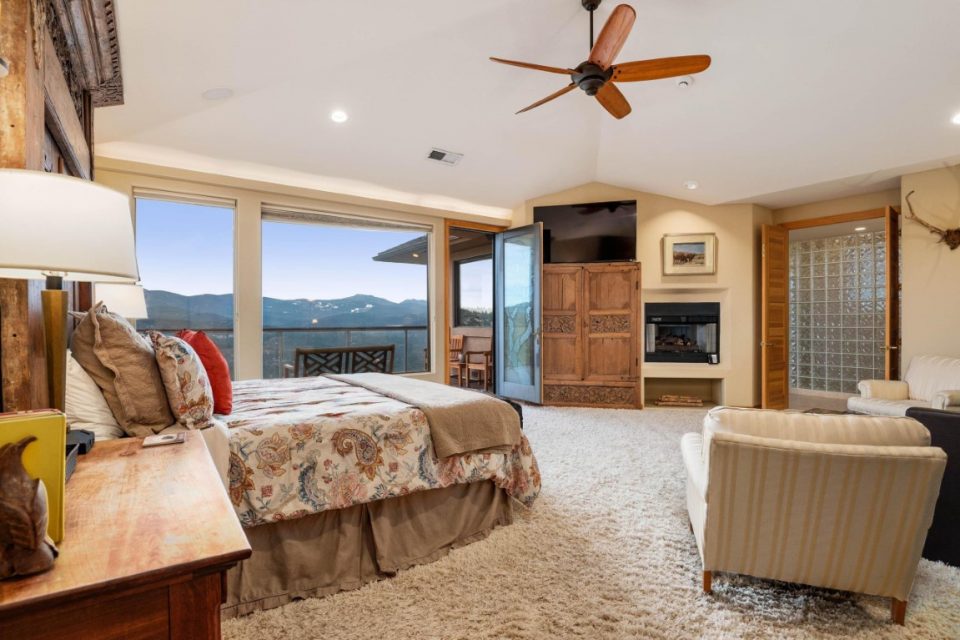 Go to sleep to a fire and wake up to a view. 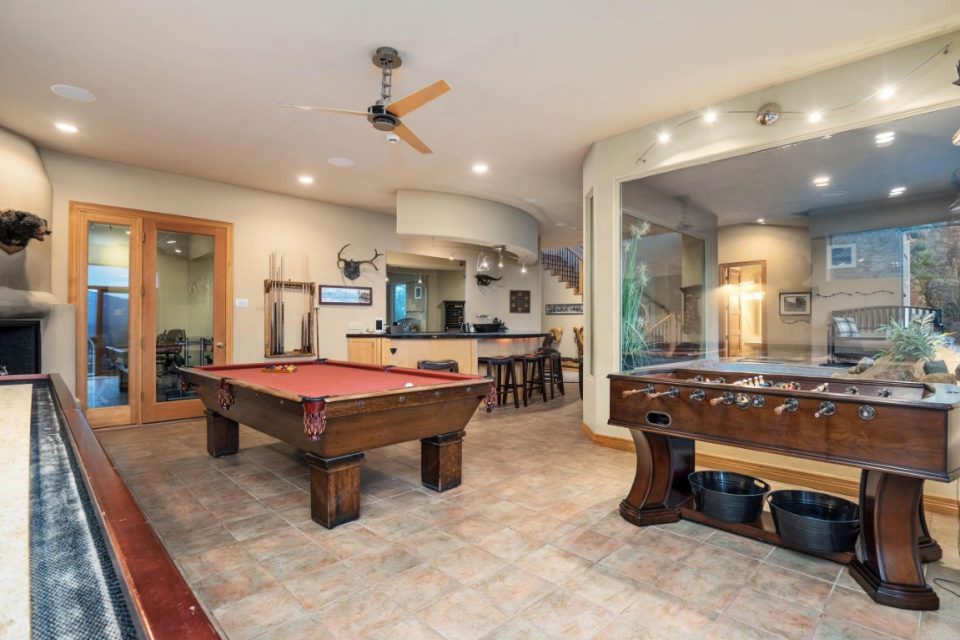 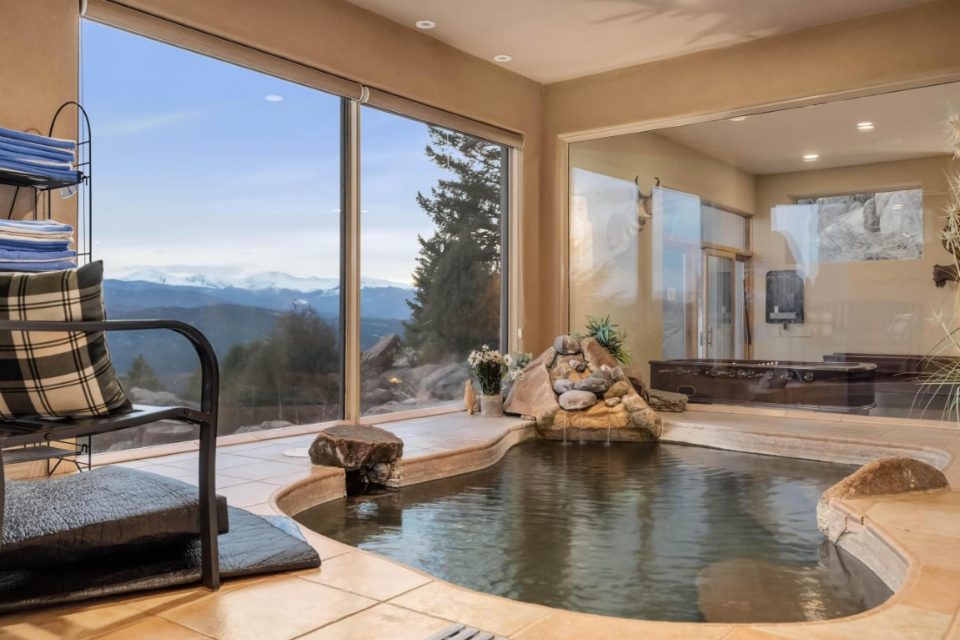 This hot tub is well placed to observe the outdoors while staying toasty behind glass walls.

Aerosmith had not seen this house when they wrote the song “Livin’ on the Edge” in the 1970s since it was built in 2000, but if they had, it would have taken their inspiration to whole new levels.  Unique in its design and definitely unique in its location, it would have won more than a Grammy or Viewers’ Choice award.  Built in and through a lofty outcropping of rock on Bear Mountain outside of Evergreen, Colorado, the views of neighboring snow-capped mountains and the valley keep eyes glued to the glass walls surrounding the house.  It is now for sale, priced at $4.99 million.

Measuring in at 8,398 square feet of living space, the house has eight bedrooms and nine baths on two levels, plus a two-bedroom guest quarters over the garage with private terrace.  The primary suite is on the main floor and has a double-sided fireplace, private deck and walk-in closets.  There is a large cook’s kitchen outfitted to cater parties or intimate family meals with an island and breakfast bar. The kitchen is surrounded with glass walls that open to a dining deck with additional breakfast dining indoors.  While cooking, one could conceivably watch a lizard sunbathing on a boulder inches away through the glass wall.  The living and dining rooms are built around boulders that appear inside with more boulders seen through glass exterior walls, showing off nature’s many art forms.

Located just outside of the Denver suburbs, Evergreen has a rather large collection of authors, sports figures and musicians.  Willie Nelson owned a 44-acre farm there, screenwriter Berkley Breathed, Olympic gold medal figure skater Scott Hamilton and U.S. Senator Gary Hart live there as did the notorious John Hinckley, Jr.

Lee Merreot is the listing agent for the property.  She is with Compass, located in North Evergreen, Colorado.