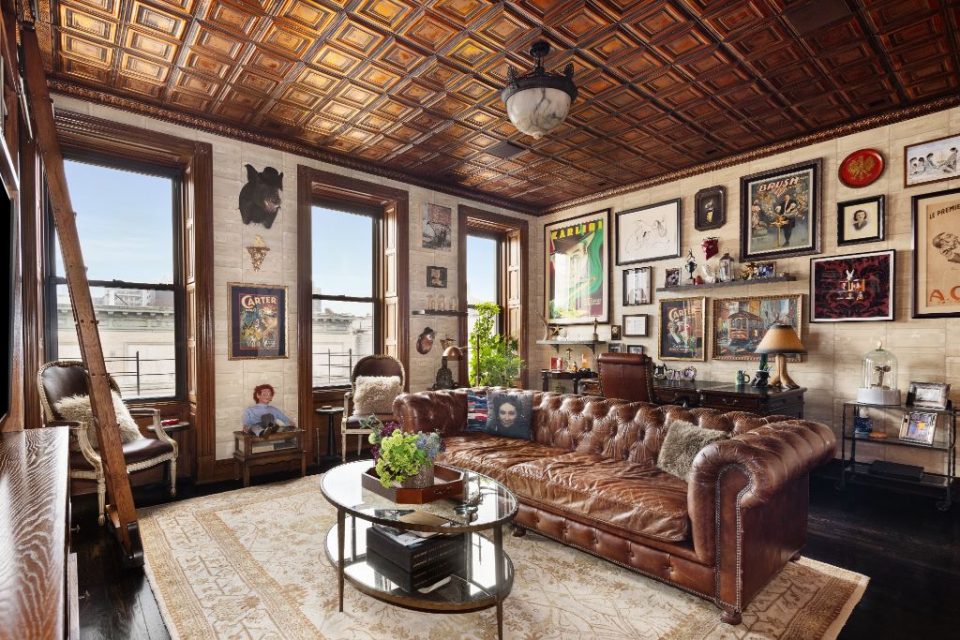 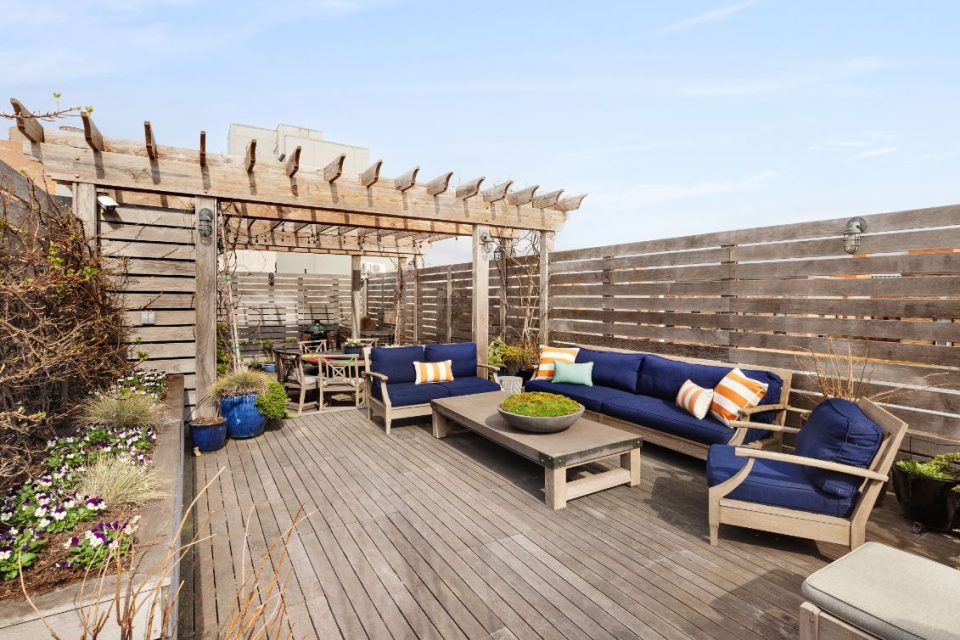 The roof top deck is perfect for Summer parties. 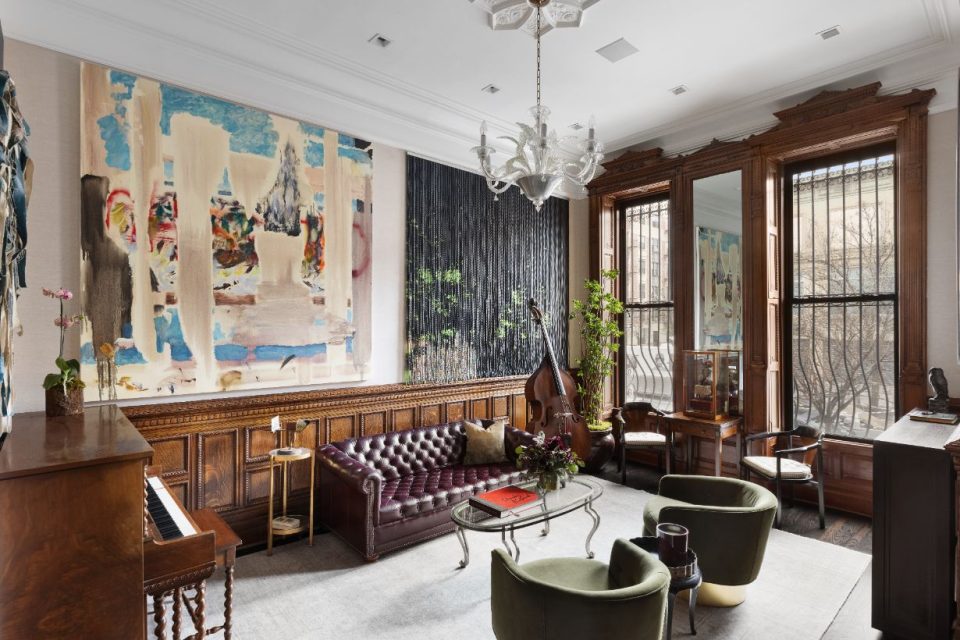 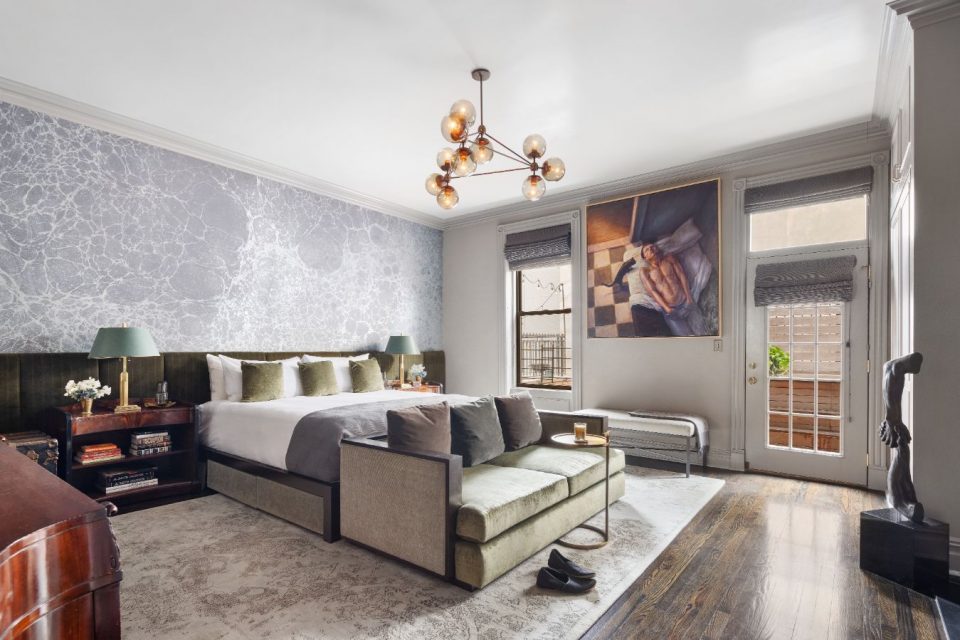 The primary bedroom is expansive with a gas fireplace and its own terrace. 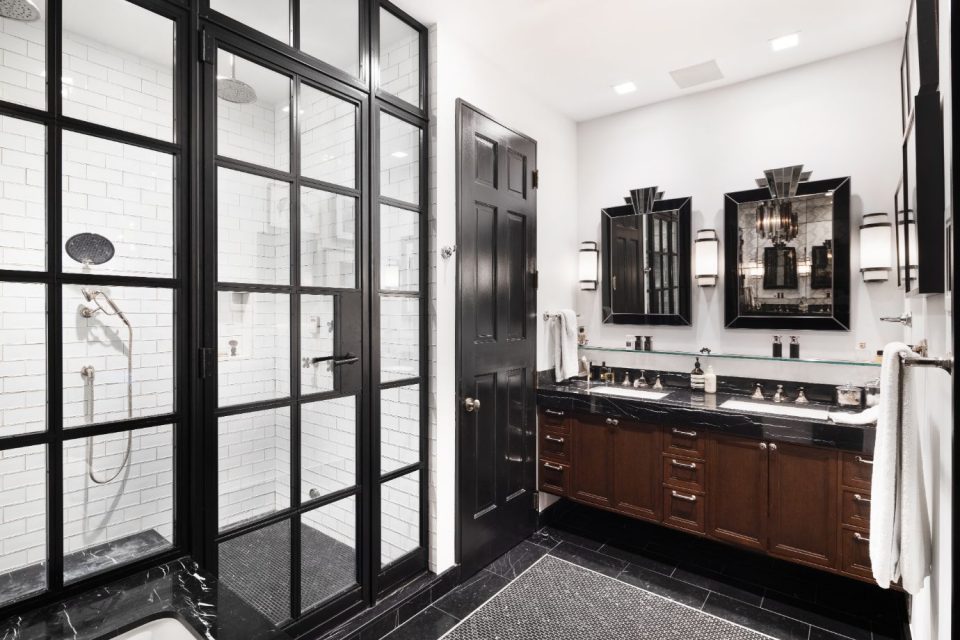 The five-fixture bathroom is outfitted with Nero Marquina marble. 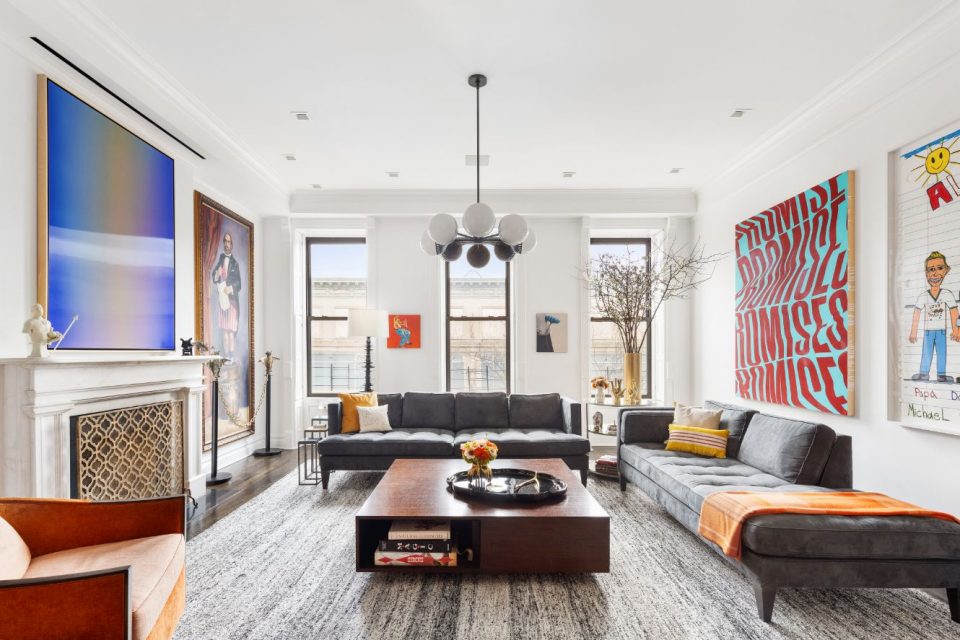 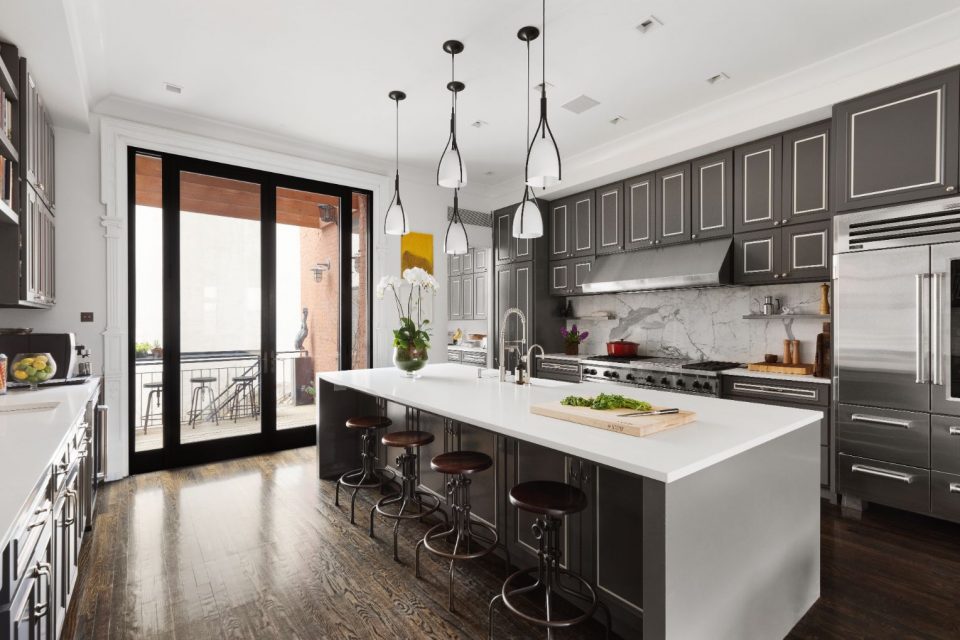 The kitchen was designed for a Le Cordon Bleu-trained professional chef. 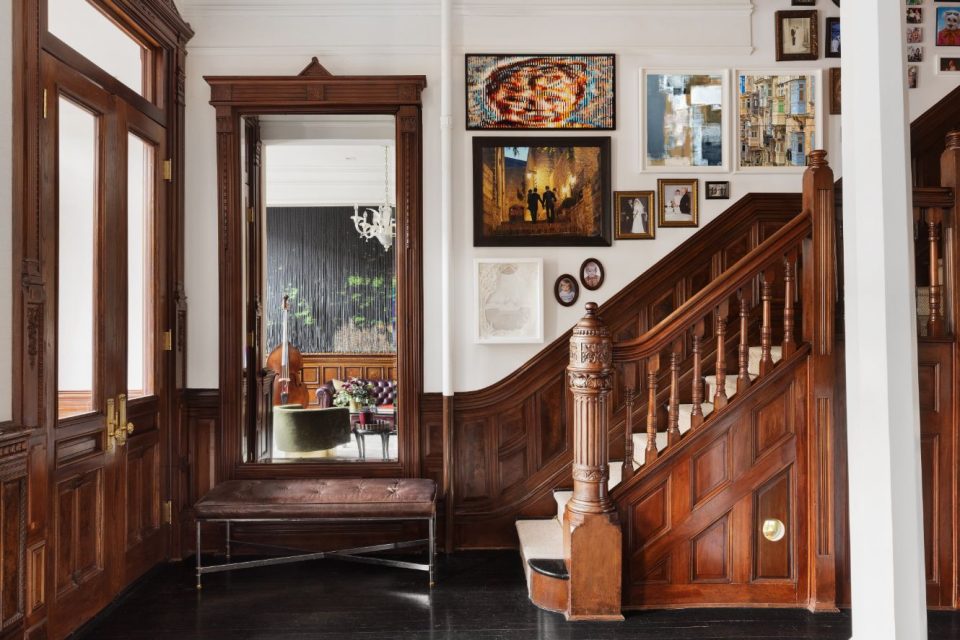 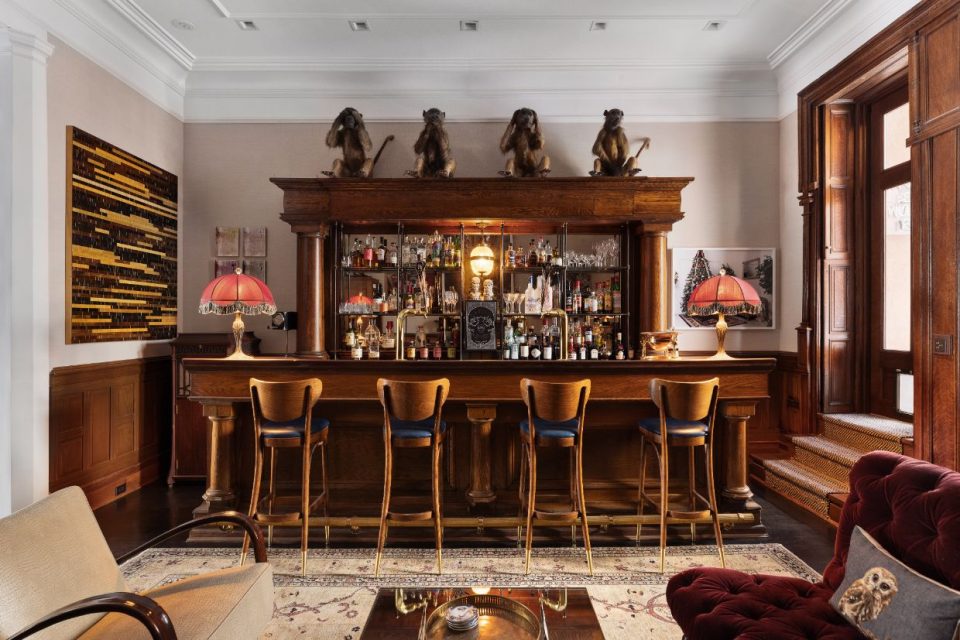 The vintage bar is sourced from an old hotel. 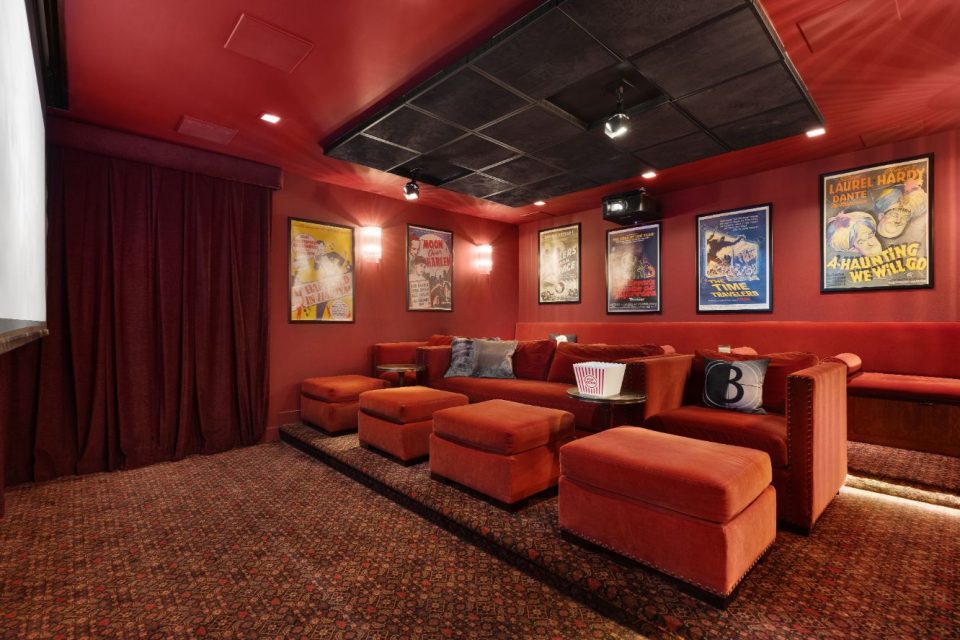 The theater seats ten in style.

Neil Patrick Harris got his first starring role as the eponymous teen-prodigy doctor on Doogie Howser M.D., and has been delighting audiences ever since. His numerous credits include film, television and Broadway, as well as hosting both the Tonys (for which he won an Emmy) and the Oscars. On the set of popular sitcom How I Met Your Mother, in which he played the womanizing Barney Stinson, Harris fell in love with a guest star, David Burtka, prompting the star to come out of the closet in a People magazine interview in 2006. Five years later, following the passage of New York’s Marriage Equality Act, the pair wed in an intimate ceremony in Italy capped by a performance by their good friend Elton John. The couple remained in Los Angeles until How I Met Your Mother concluded, moving with their twin sons, Harper and Gideon, to a gorgeous five-story Harlem brownstone in 2013

Completely renovated by interior designer Trace Lehnhoff and award-winning architect Jeffery Povero under the couple’s direction, the 8,000-square-foot 5th Avenue residence was listed for sale at $7.325 million and, according to the New York Post, it has now sold for just over $7.1 million - setting a new record for the neighborhood.  A truly unique space, the five-bedroom, six-bath townhouse features soaring 12’ ceilings, light-filled spaces, gorgeous original woodwork, beautifully restored interiors, and top-of-the-line appliances.

David Burtka is a Le Cordon Bleu-trained professional chef, and the mansion’s kitchen does not disappoint, featuring a massive island countertop with a farmhouse sink, two six-burner Wolf ranges, a Sub Zero refrigerator/freezer, separate beverage refrigerator, wine refrigerator and an oversized pantry. Beautiful glass doors open onto an outdoor deck with built-in grill and city views for intimate gatherings, while the larger roof deck, also with a built-in grill, has room for guests beneath wood-pergola shading. A vintage bar sourced from an old hotel and brought up to date with new plumbing and fixtures provides a distinctive location for entertaining.

The primary bedroom is expansive with a gas fireplace (one of three throughout the home) and a massive walk-in closet as well as its own outdoor terrace with a jacuzzi. The five-fixture bathroom is outfitted with Nero Marquina marble and a double vanity. An attached den/library offers a private place to relax.

Neil Patrick Harris left his personal touch on the home’s top-floor office, which opens via a secret door when the eyeball of a magician on a vintage poster is pressed. A gorgeous terraced garden offers a chance to connect with nature in the middle of the city. A ten-seat theater, rec room, wine cellar, workshop and gym complete the exquisitely turned-out home.

Harlem, one of Manhattan’s most historic neighborhoods, was settled by the Dutch in 1658 and rose to cultural prominence as the site of the “Harlem Renaissance” of African-American artists in the 1920s. Nearby 125th Street, home of the famous Apollo Theater, is still a vibrant boulevard lined with shops, restaurants, and nightlife, while pocket parks throughout the neighborhood supply options for tranquil leisure. 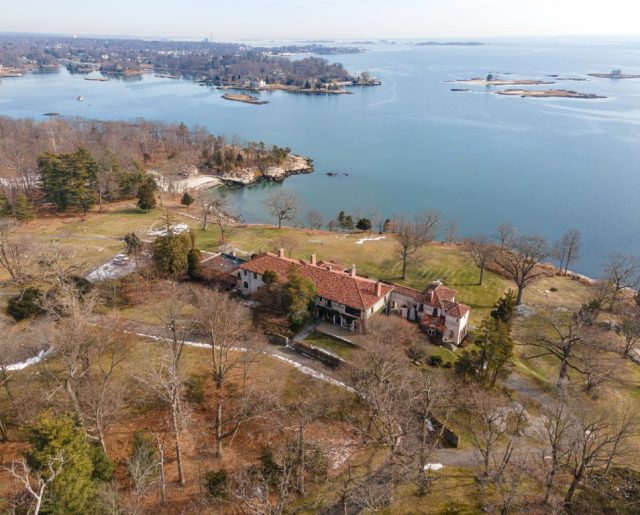 The Town of Darien, Connecticut is officially under contract to purchase one of America’s last family-owned properties, Great Island, that...Read More