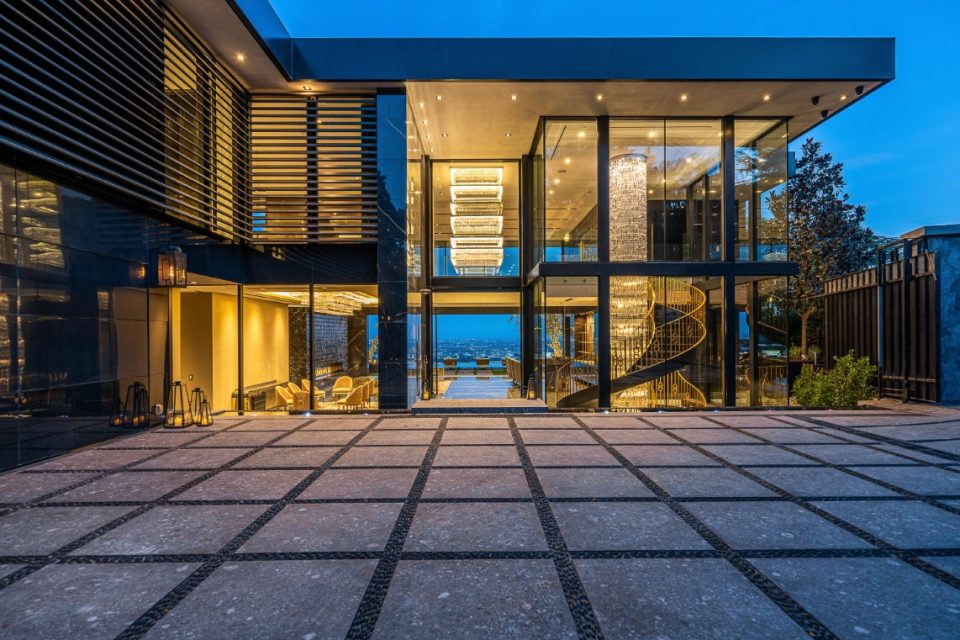 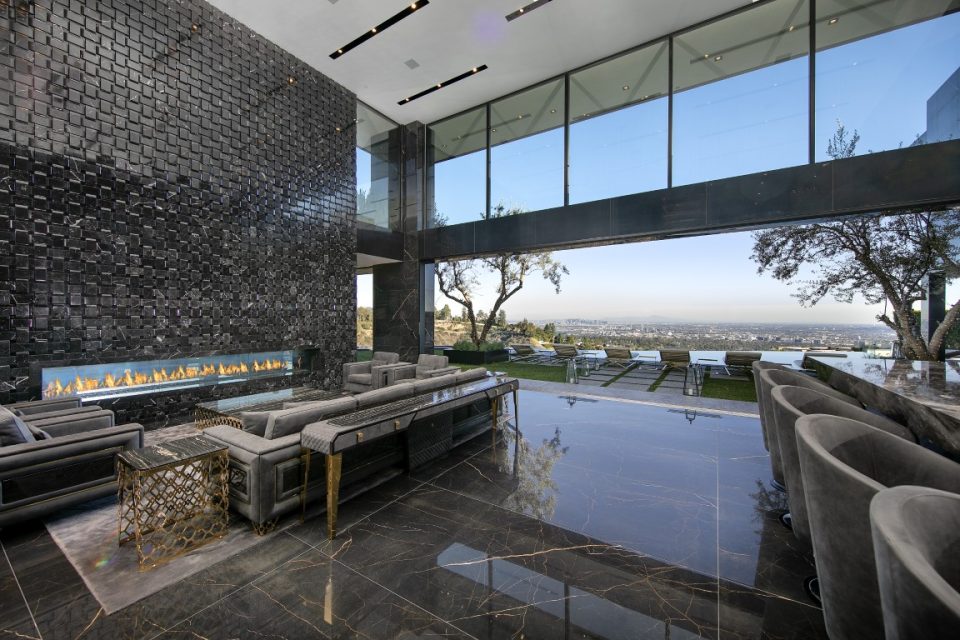 La Fin is perched high above LA with knockout views of the mountains and LA skyline. 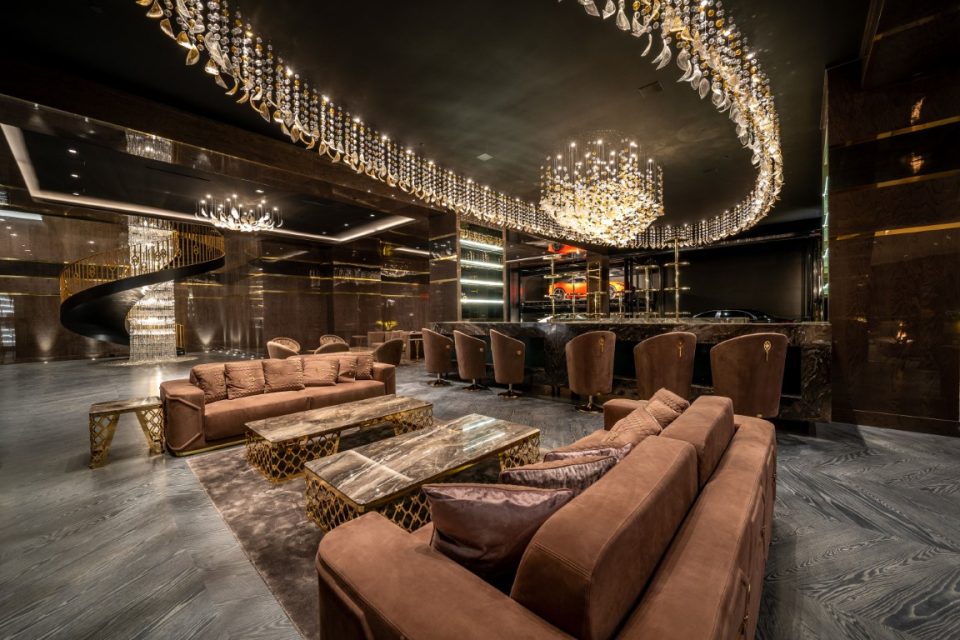 The house is designed for unforgettable entertaining. 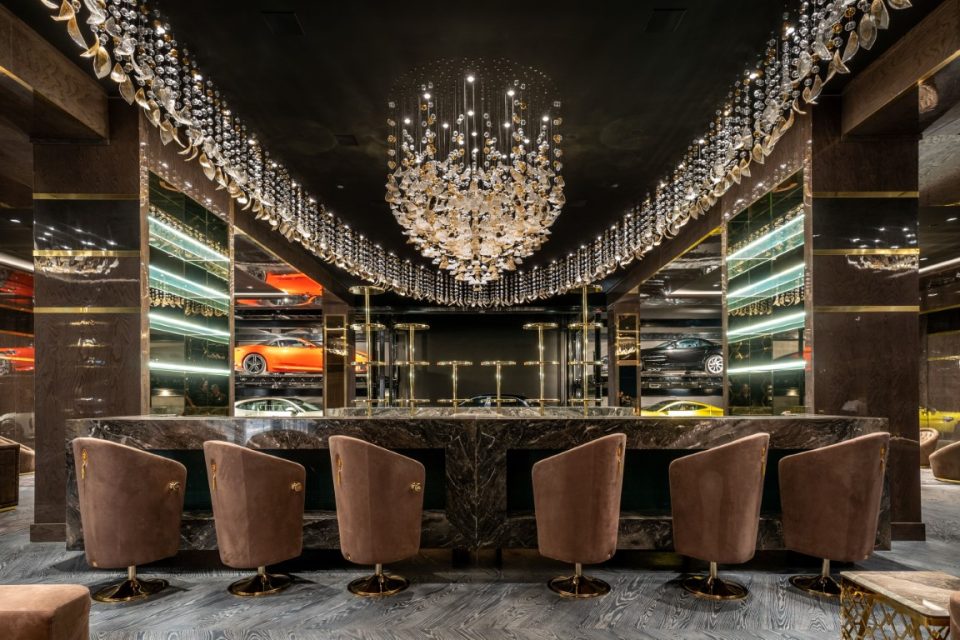 Luxury cars rotating on the wall behind the bar is not a tipsy fantasy. 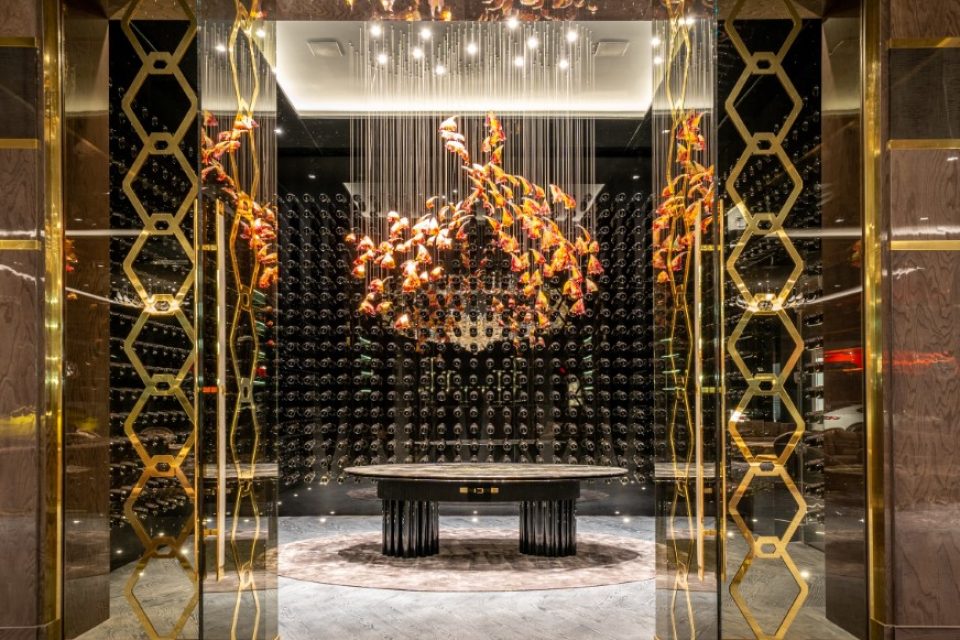 Lighting in the wine tasting room is a study in Murano art. 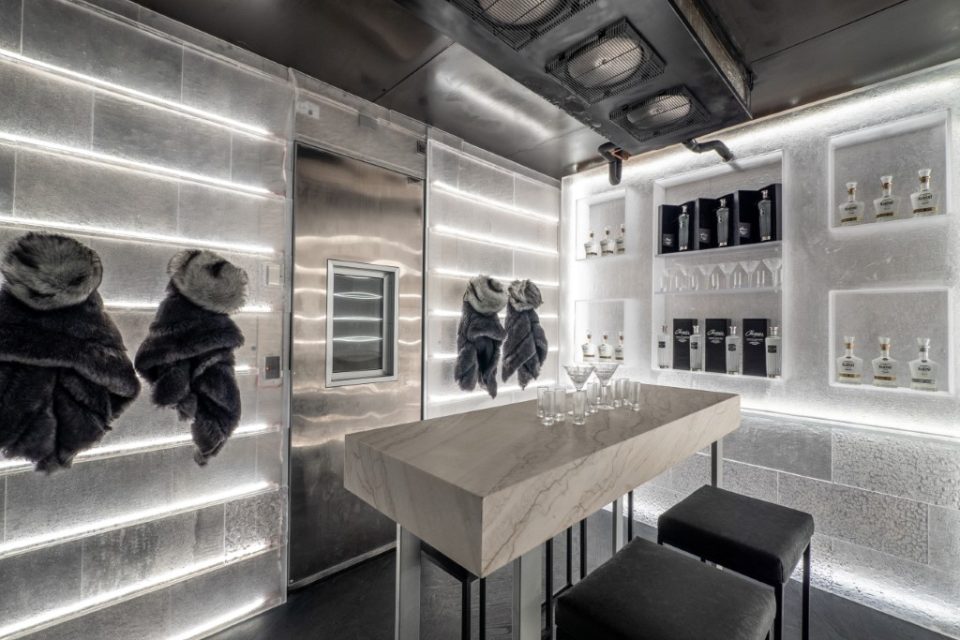 The icy vodka tasting room comes with parkas for guests. 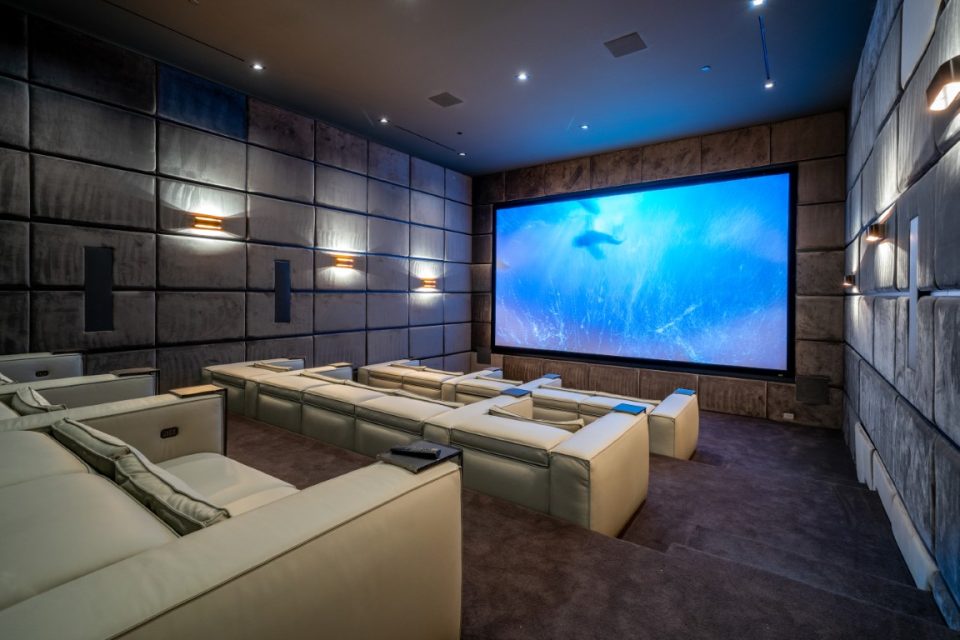 Leather from Brazil is the upholstery of choice for the theater. 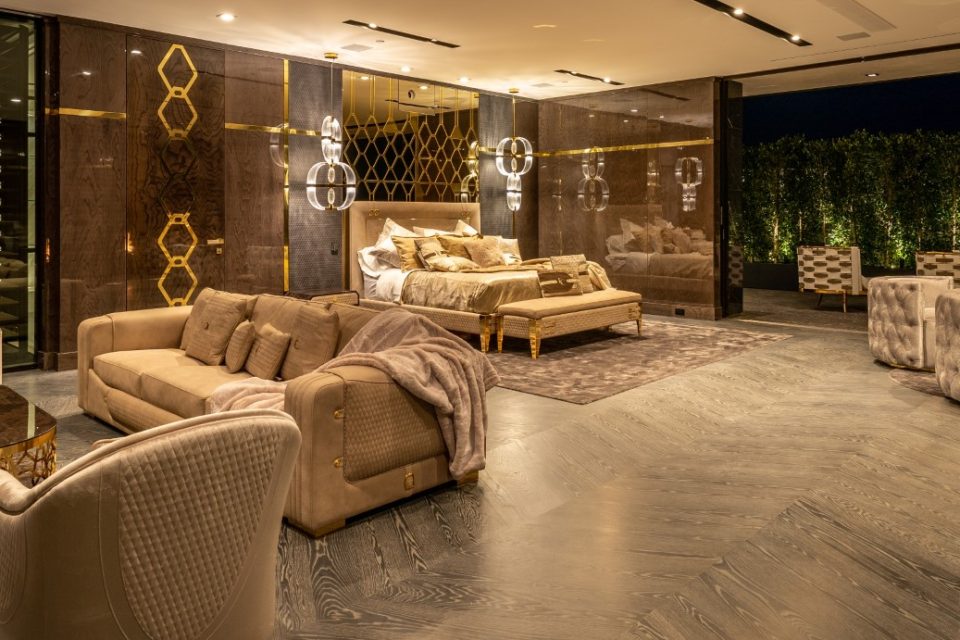 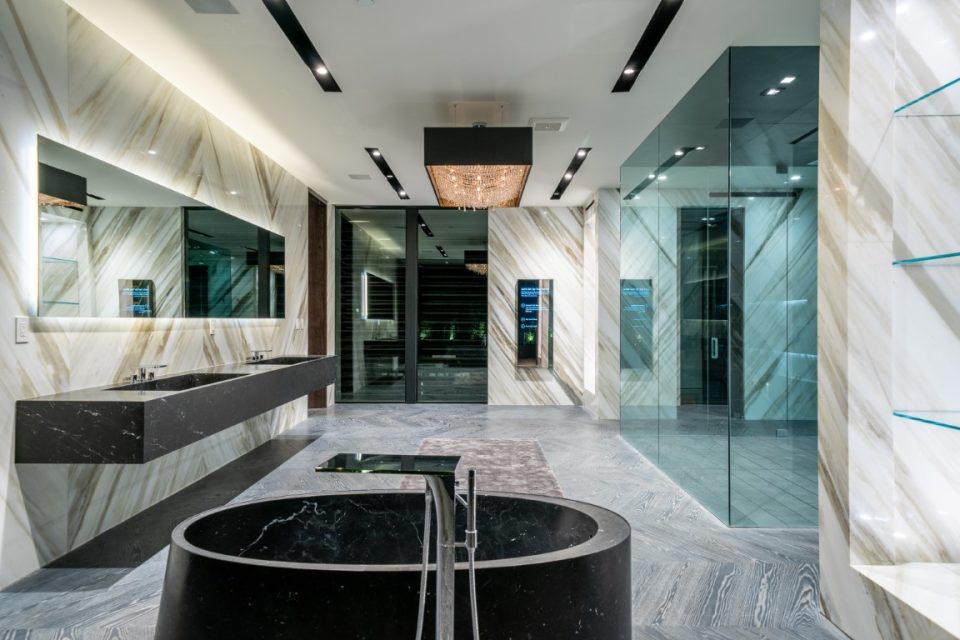 The primary bath is large and spacious. 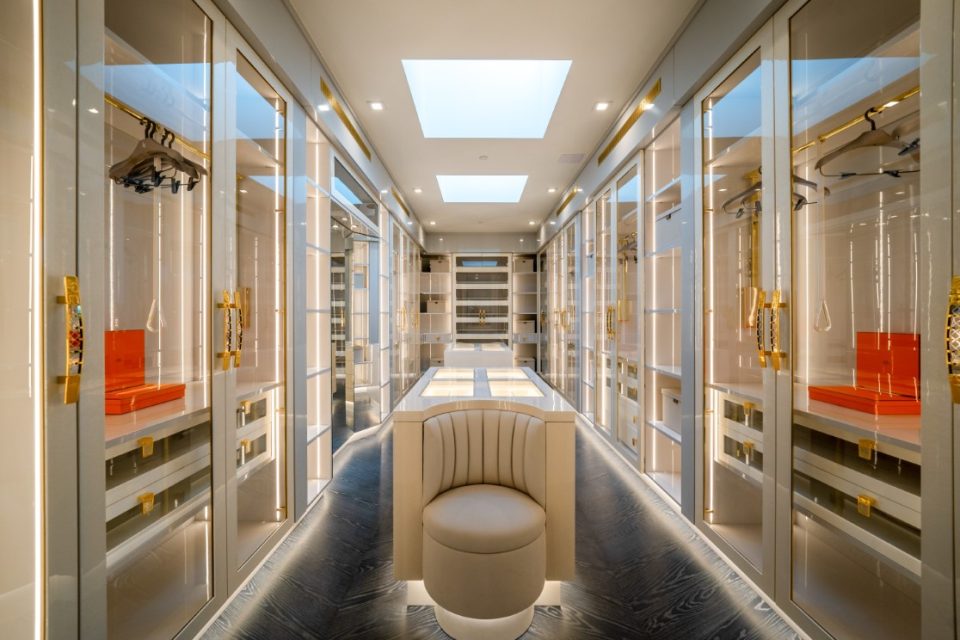 Her dressing room is light with a definite feminine vibe. 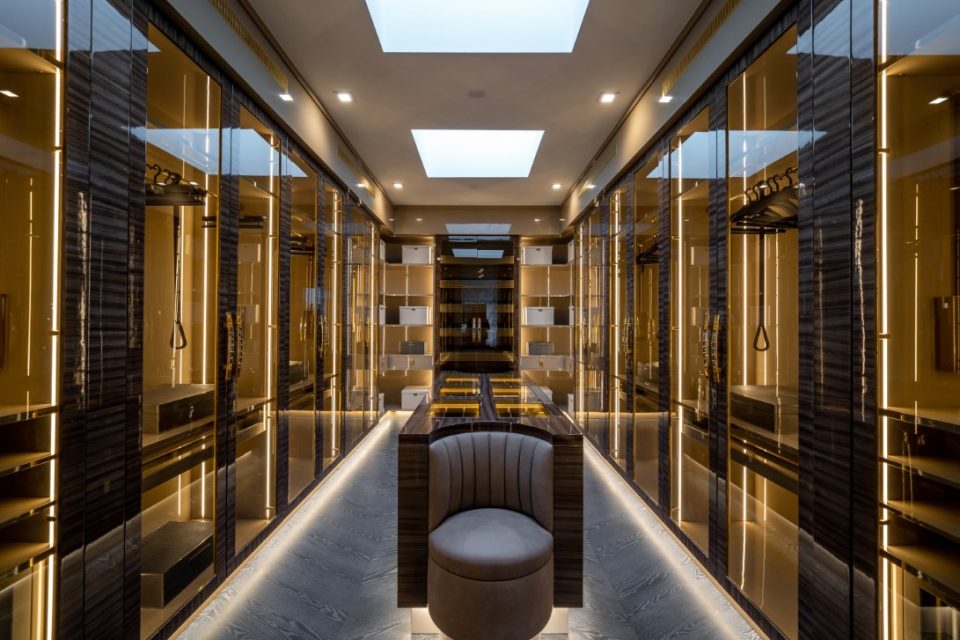 His dressing room is identical to hers but sports masculine finishes. 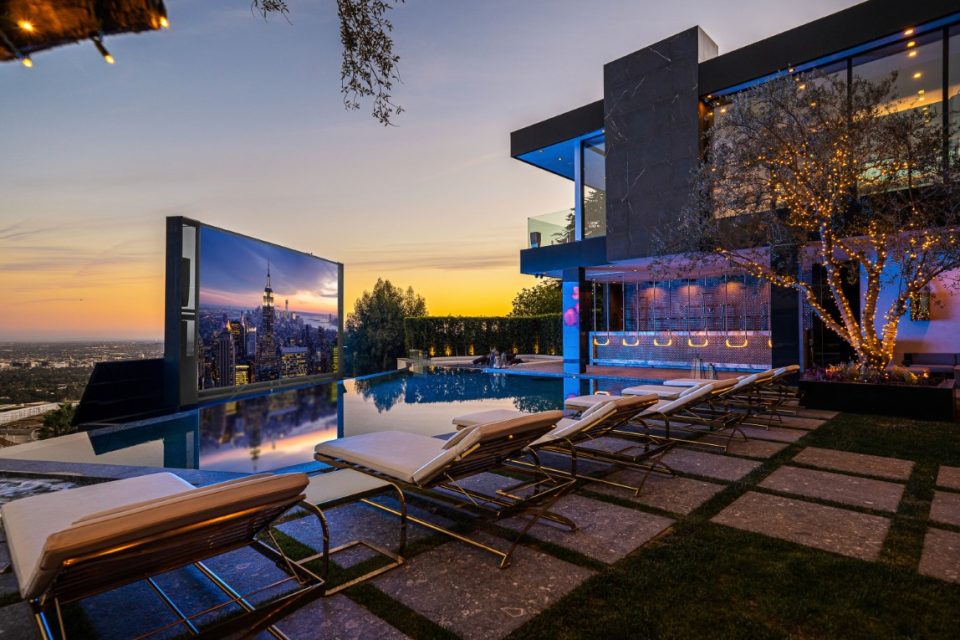 A massive media screen rises from behind the infinity pool and bar stools have been replaced with swings.

Five years in the making, a new contemporary estate in Bel Air might make even Midas jealous. The mythical king with the ability to turn anything he touched into gold would probably feel quite comfortable in the mansion known as “La Fin,” with its gold marble, fixtures and accents. Not to mention the 44-foot chandelier with 50,000 crystals, a 23-foot outdoor LED screen, bar with light-up swings, and the show-stopping entertainment room that could double as Midas’s penthouse.  Somewhere between sublime and ostentatious, the home has just gone on the market at $139 million.

Built by Joe Englanoff, who was also involved in the creation of the highly publicized Bel Air mansion, The One, which is currently listed at $295 million, he has pulled out all the stops and fully engaged his house fantasy in La Fin. Perched high above LA with knockout views of the mountains and LA skyline, La Fin offers first-time amenities such as a vodka tasting room with fur parkas available for chilly tasters.  Another unique feature is the Las Vegas-style bar with a rotating six-car display that can be viewed while sipping the latest cocktail trend.

Besides the home’s 12 bedrooms and 16 baths, the home’s focal feature is the stunning spiral staircase that connects three floors and features a 44-foot chandelier of 50,000 crystals.  There is a 6,000-square-foot nightclub, a glass-enclosed wine room with Murano art, and a cigar room with custom ventilation.  Luxurious materials were sourced from Italy, Portugal and Belgium with the primary suite clad in Italian oak and marble fireplace from Portugal. Its bath contains book matched Calacatta gold marble, a 100-square-foot shower, and a floating-marble vanity.  The leather on the motorized home theater seating was found in Belgium.  There is also a gym with a rock-climbing wall and a full complement of equipment including multiple Pelotons. The amenities are that of a grand hotel and designed around entertaining.  The kitchen blends in quietly but is set up for extensive party catering.  Outside is a bar with light-up swings rather than stools, a pool, wrap-around pool deck, and the 23-foot TV screen that rises via hydraulics. And a separate, detached penthouse for guests.

Bel Air has long been the neighborhood of choice for big celebrities and successful industry moguls.  Some who have been drawn there are Jennifer Aniston, Beyoncé, Jay-Z, Ronald and Nancy Reagan, Elizabeth Taylor and The Weeknd.

The listing agents for La Fin are Jon Grauman and Adam Rosenfeld of The Agency, Beverly Hills.