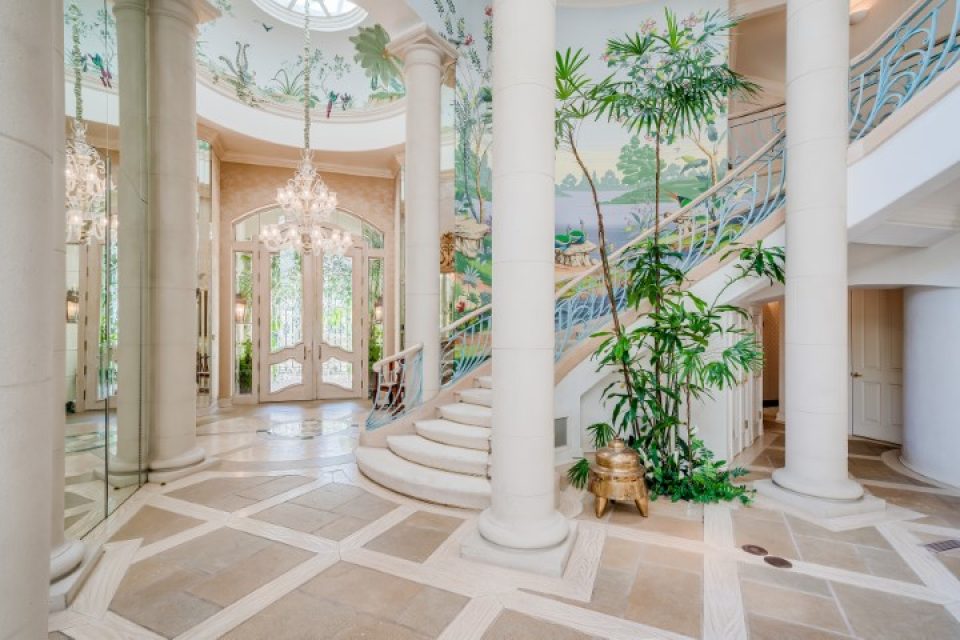 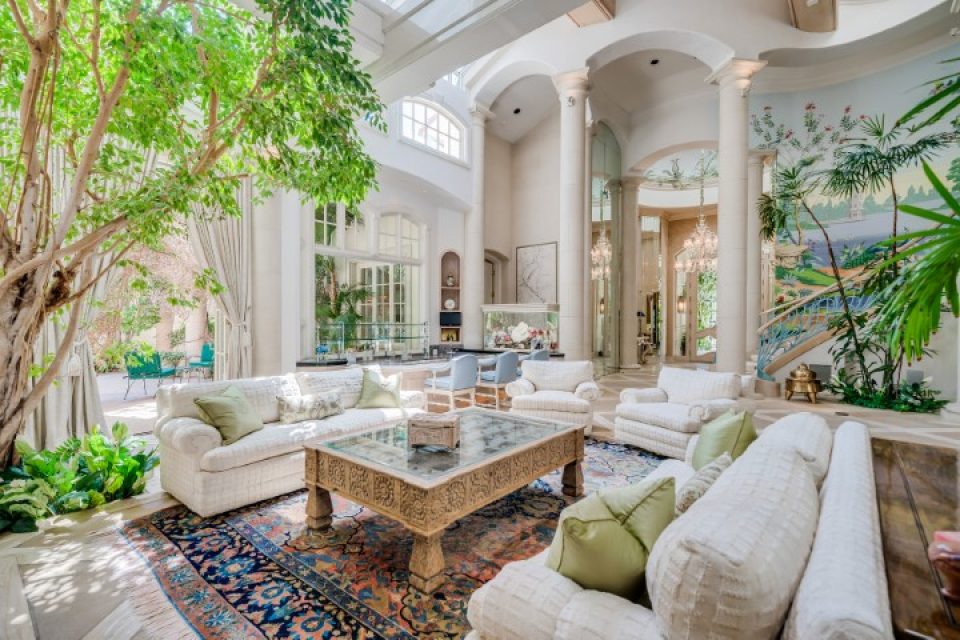 Glass walls with glass extending partially into the ceiling creates an excellent environment for indoor plants and trees. 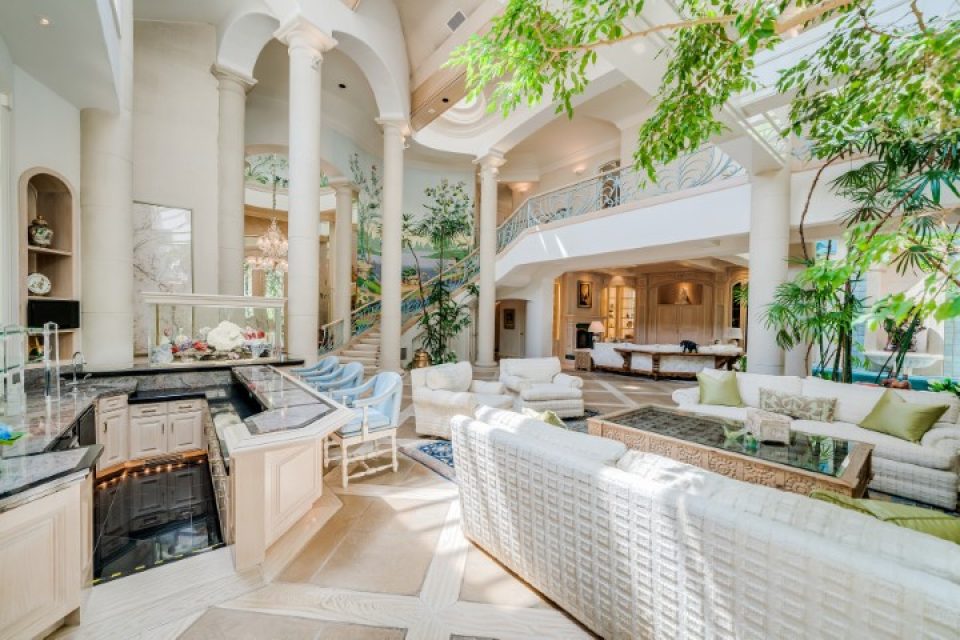 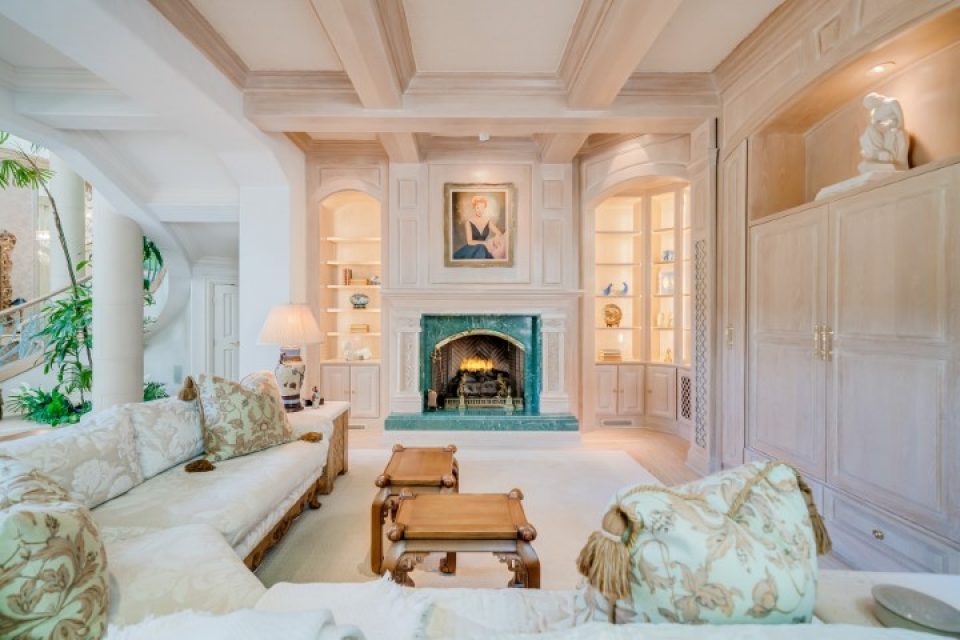 A portrait of Rhonda Fleming hangs over the fireplace in the family room. 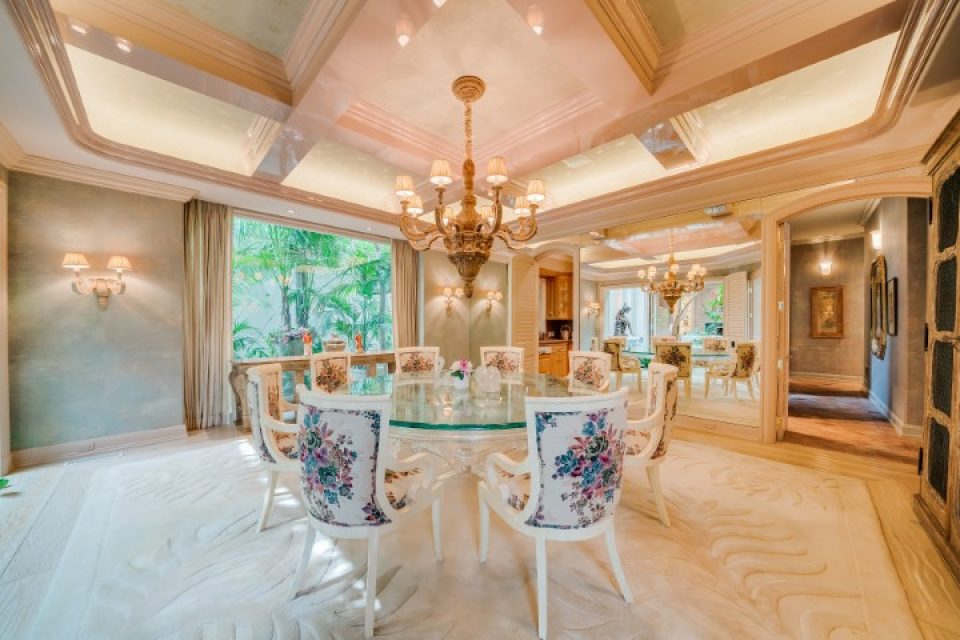 The large dining room can seat any number of guests for those who love to entertain. 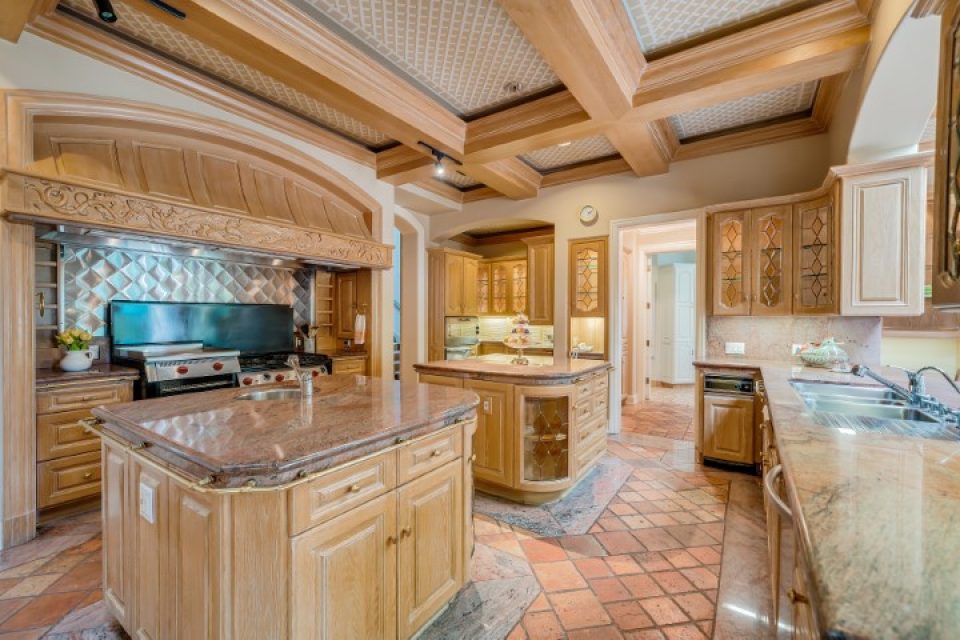 The chef's kitchen is large enough for caterers as well as perfect for preparing intimate dinners. 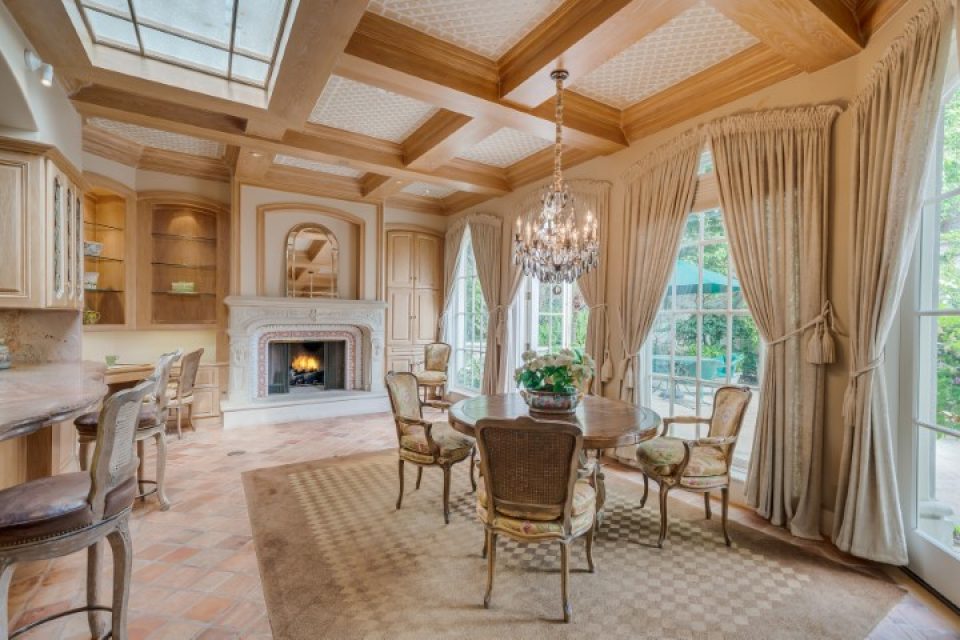 The eat-in portion of the kitchen has its own fireplace and views over the terrace. 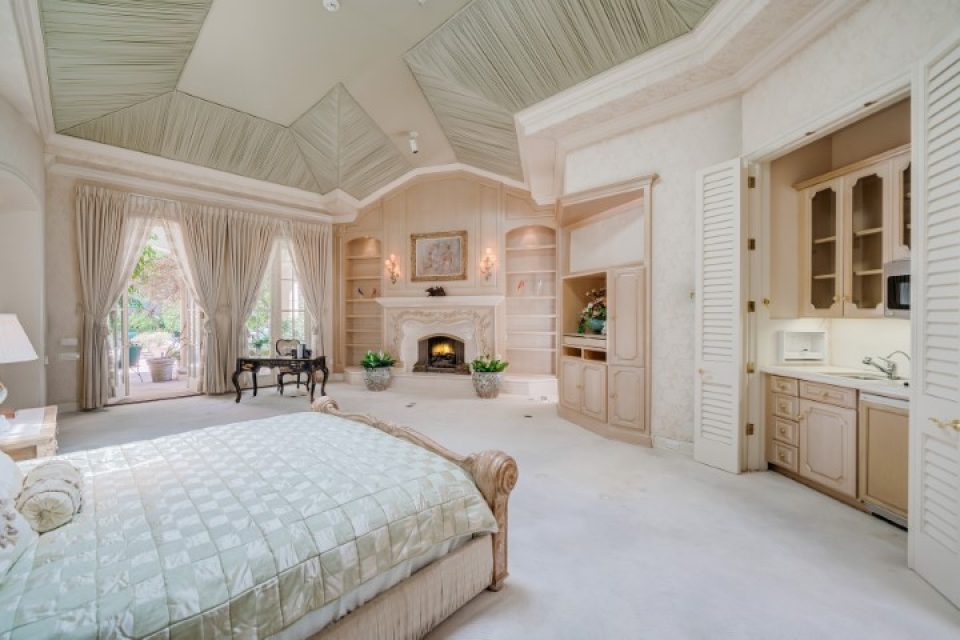 The rooms of the master suite are unusually large. 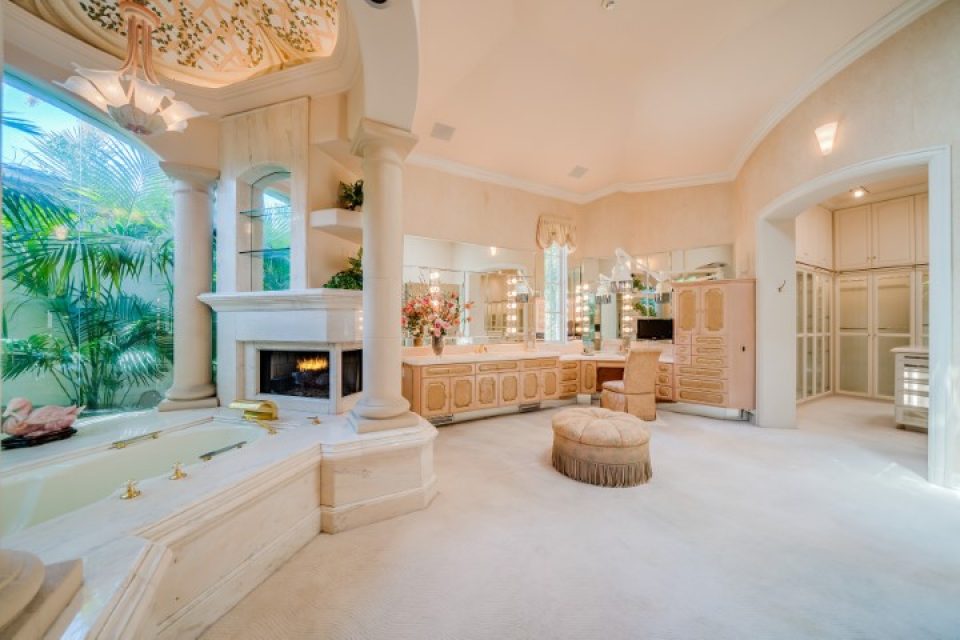 The master bath is spacious with floor to ceiling windows that have views to a walled tropical terrace. 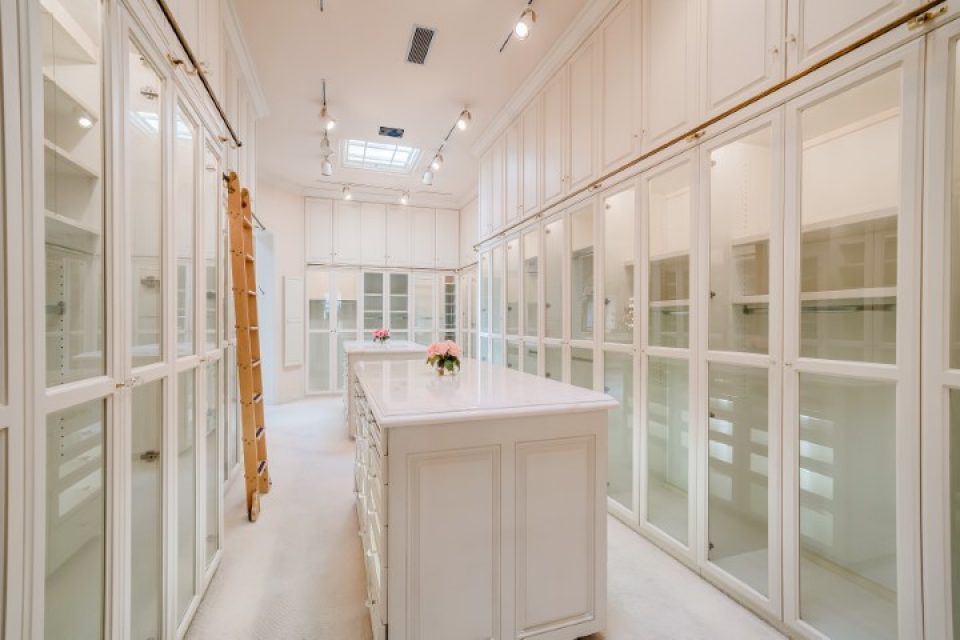 The master dressing room is matched in size to the bedroom and bath. 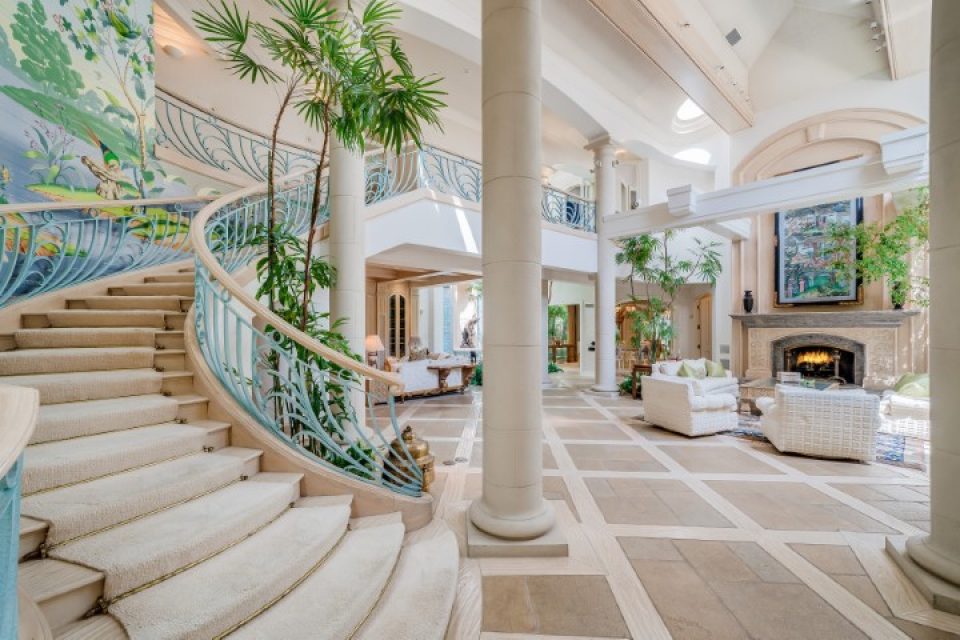 Although there is an elevator, the sweeping stairway rises next to a beautiful garden mural. 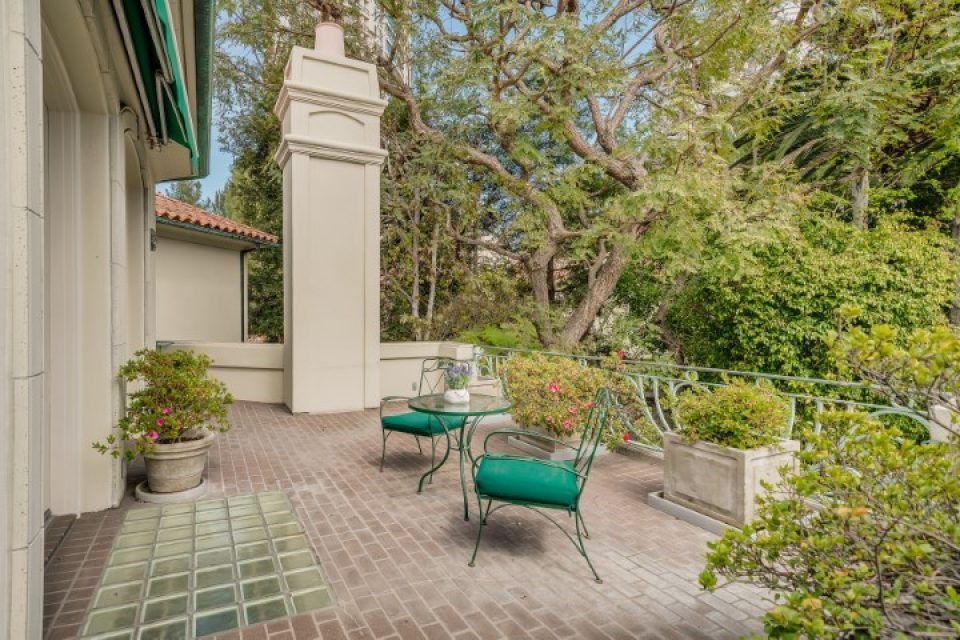 A private terrace captures the sunshine. 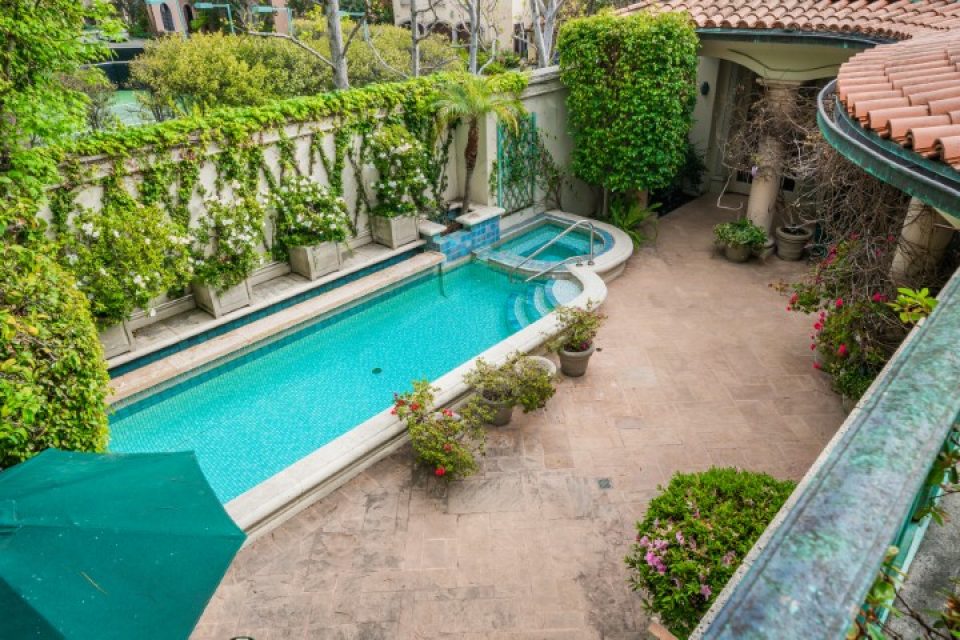 Although there is a community pool, the home has its own pool and spa.

One of Hollywood’s busiest and most popular actresses from the 1940s to the ‘70s, Rhonda Fleming was a fiery redhead with fair skin and green eyes. She was the perfect actress for the mid-20th-century advances in film colorization, so much in demand for the new technology that she earned the nickname Queen of Technicolor. Rhonda starred in classic films such as Gunfight at the O.K. Corral, Spellbound, A Connecticut Yankee in King Arthur's Court and The Buster Keaton Story, a co-star with Hollywood’s most popular men, including Gregory Peck, Robert Mitchum, Bob Hope, Charlton Heston, and four movies with Ronald Reagan. In the 1960s and ‘70s, Rhonda made the transition to television in hit shows such as Wagon Train, The Virginian and The Love Boat. Altogether, Rhonda performed in over 100 movie and television productions and even had a frequent stint as a Las Vegas nightclub act. Married six times, Rhonda and her fifth husband, Ted Mann, were among Hollywood’s most generous philanthropists. Their sunny villa, one of L.A.’s prettiest homes, is for sale priced at $11.995 million.

Fleming invested her movie earnings in California real estate, when it was still affordable, and became quite wealthy. In 1977, she married movie-mogul Ted Mann, best known as the person who bought Grauman’s Chinese Theatre and changed its name to Mann’s Chinese Theater. Together, the couple became a philanthropic force in Southern California founding the Rhonda Fleming Mann Clinic for Comprehensive Care at the UCLA Medical Center, the Rhonda Fleming Mann Research Fellowship at the City of Hope, and supported a vast range of initiatives for cancer patients, women, children, and the homeless. Mann died in 2001 and Fleming in 2020.

Rhonda and Ted lived in one of the largest villas in the celebrity-hotspot Century Woods Estates. Measuring 9,604 square feet, the Fleming-Mann home has five bedrooms and six baths with a two-story, open-plan living area, six fireplaces and a private terrace with swimming pool. Huge windows allow the entire villa to be filled with sunlight and tropical views are seen from every window and door. Room sizes are vast; there are coffered-and-beamed ceilings, a guest wing with kitchenette, skylights, chef’s kitchen with two islands, and multiple dining options that offer everything for entertaining on either a grand or intimate scale. Tall trees thrive indoors and are at home against tropical wall murals. Some of the home’s many extras include a hair salon, spa/exercise room with ballet barre, staff quarters and catwalk above the great room and the treetops of the two-story atrium. The villa is within walking distance of shopping, dining and entertainment.

Inspired by grand European architecture, the Mediterranean-styled, guard-gated complex of 36 villas has lushly landscaped grounds, a large clubhouse, both indoor-and-outdoor pools and spas, his-and-her locker rooms, and a tennis court. The development was built in 1990, designed by architect Peter Choate, who did a number of celebrity homes including Sharon Stone, Mel Brooks and Carol Burnett.

Century City is a hot spot for celebrities and has attracted many A-listers such as Rihanna, Paula Abdul, and Candy Spelling, who moved there after selling her $85 million mansion in Holmby Hills (was originally listed at $150 million).

The former home of actress Rhonda Fleming is listed by Rachelle Rosten and Kelly deLaat of Douglas Elliman, Beverly Hills. 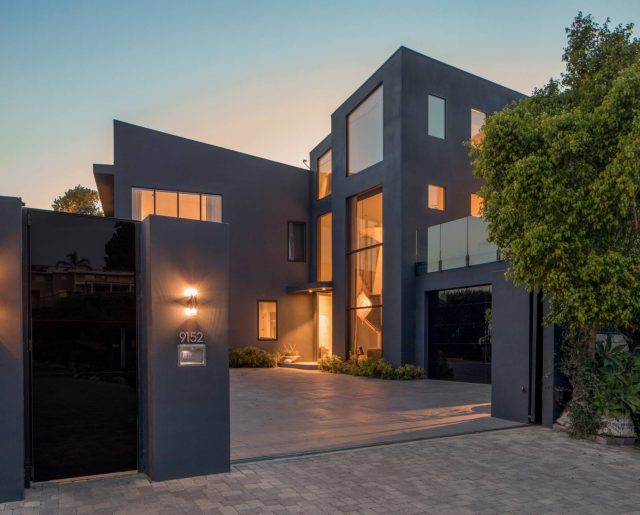 John Legend & Chrissy Teigen Have Too Many Beverly Hills Homes!

After settling in their new Beverly Hills home last summer, John Legend and Chrissy Teigen have not yet sold their...Read More