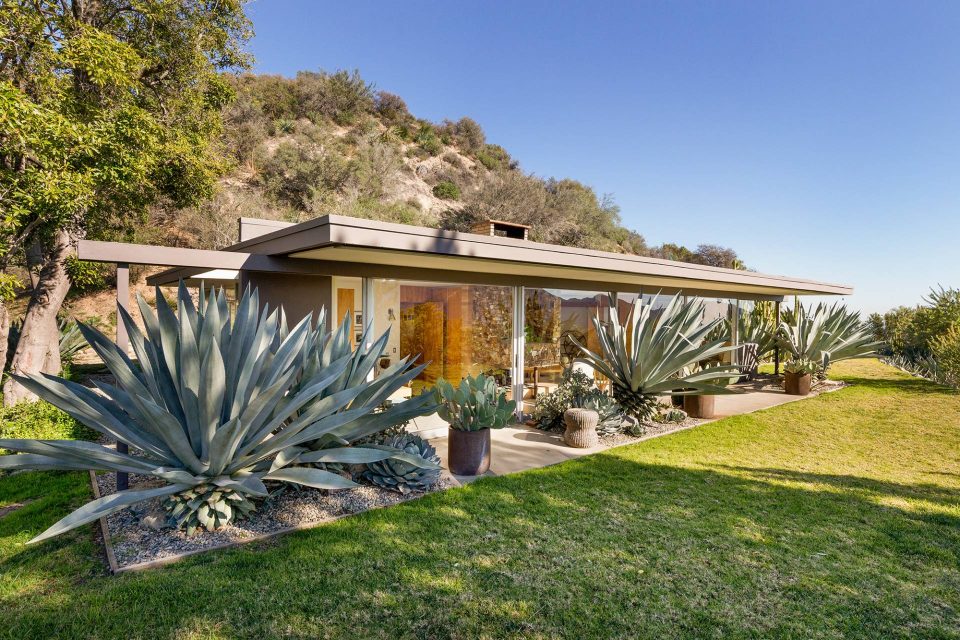 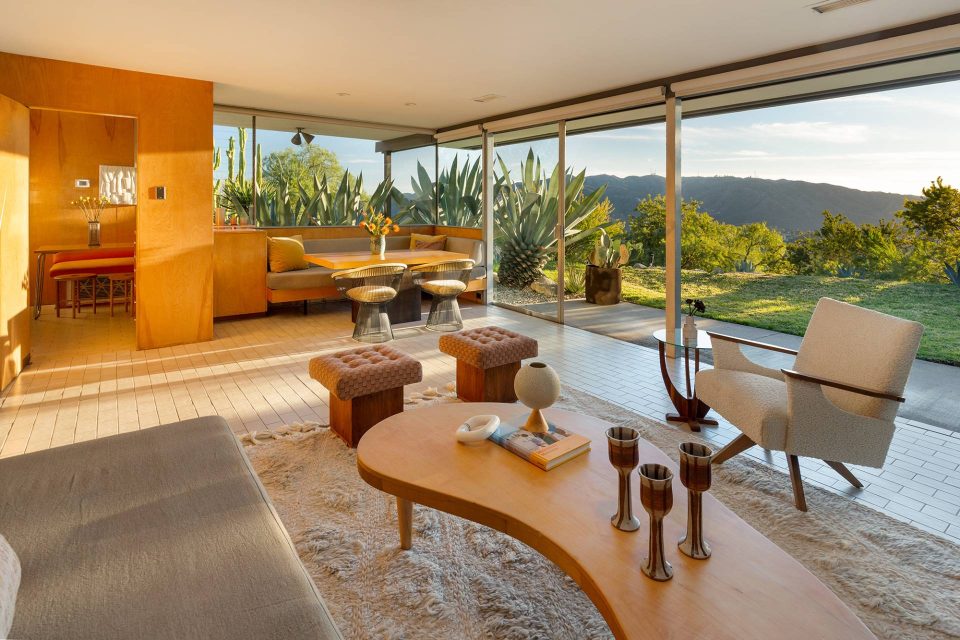 Glass walls offer breathtaking views from every side. 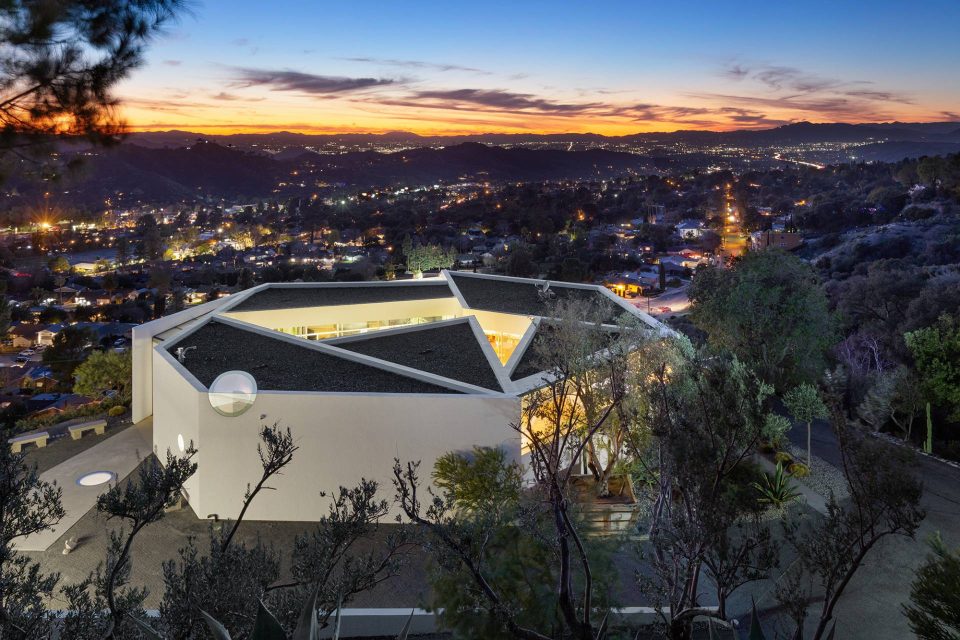 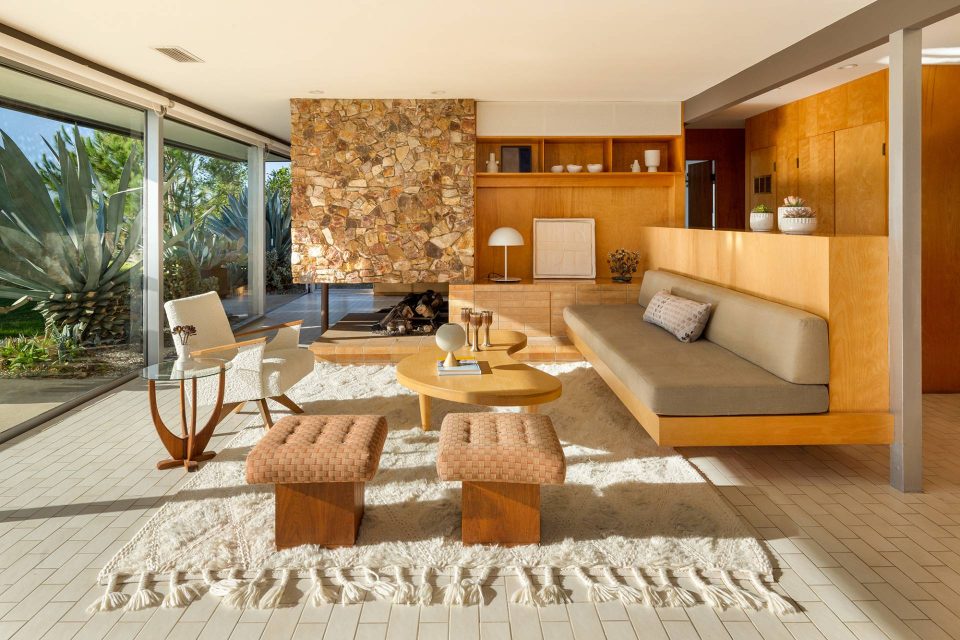 A stone fireplace and Neutra-designed built-ins make the home special. 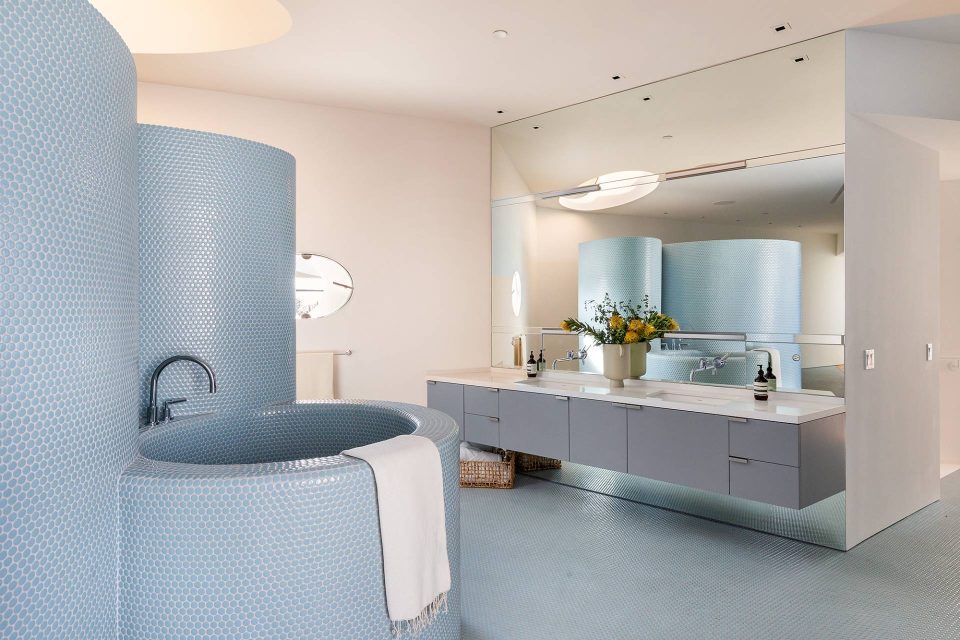 The primary suite has a curvilinear penny tiled bathroom. 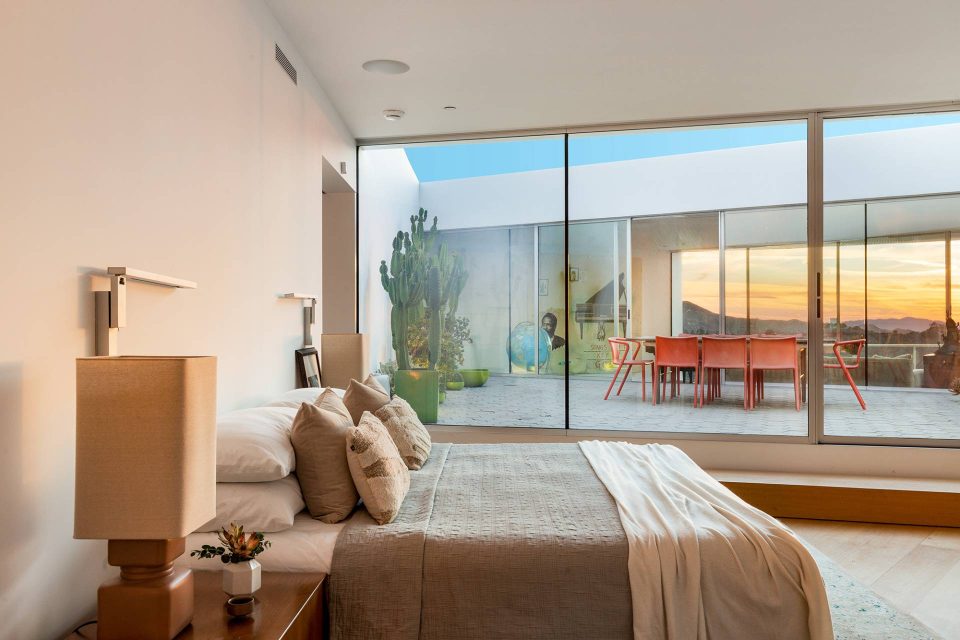 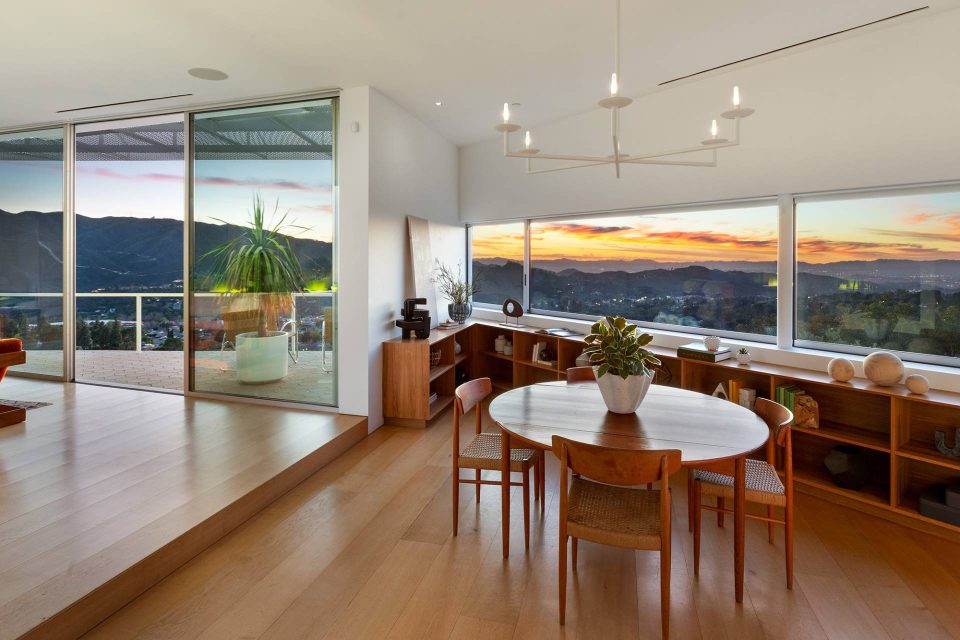 Glass and wood give the home an airy, inviting feel. 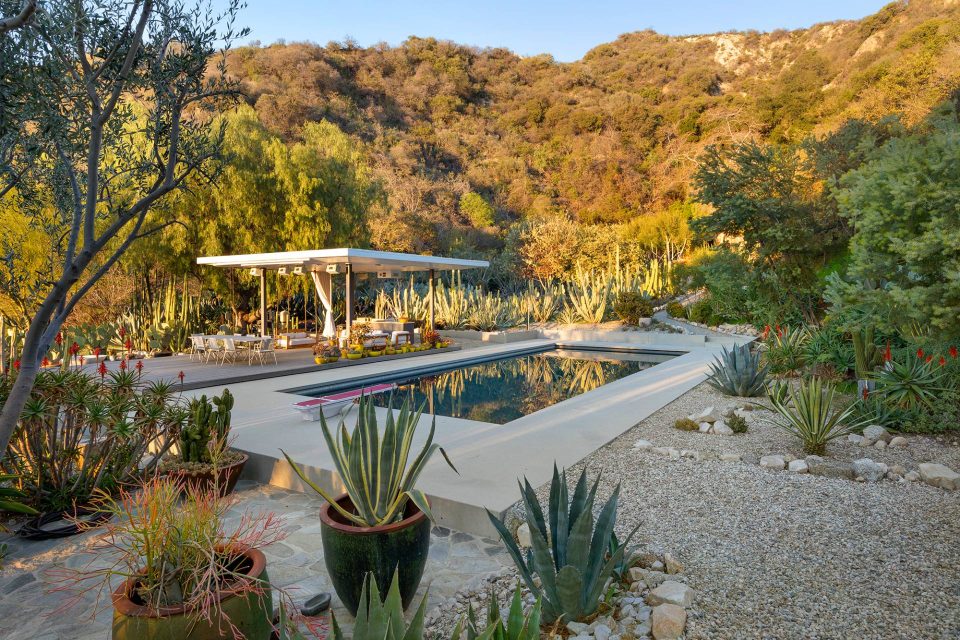 The 50 foot Johnston Vidal pool is surrounded by succulents. 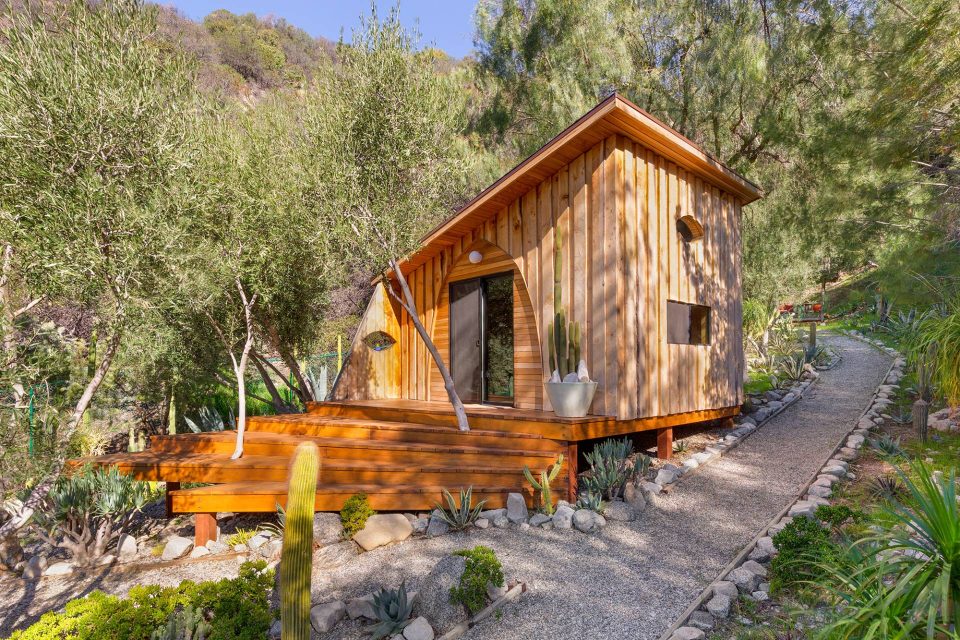 A unique cabin designed and built by artist Peter Staley completes the compound.

Richard Neutra was one of America’s most important modern architects from the 1920s to the 1960s designing famous homes such as the Kaufmann Desert House in Palm Springs for Edgar J. Kaufmann (who also commissioned Fallingwater in Pennsylvania), the Julian Bond House in San Diego, and the Kronish House in Beverly Hills. At the height of his career in 1953, Neutra designed a home for his secretary, Dorothy Serulnic. A classic Southern California contemporary design, in the 1950s and ‘60s, Neutra’s futuristic style was copied by builders across the United States who were leading the post World War II migration to the new suburbs. His secretary’s home is now for sale as part of a contemporary complex of two homes and a guest cabin, at an executive-level price of $9.799 million.

Neutra was born in Austria in 1892 and emigrated to the US in the 1920s where he worked briefly for Frank Lloyd Wright and later established his own company. His work was exhibited at the seminal 1932 modernist exhibition at LA’s MoMA and was part of the architecture competition in the Summer Olympics of the same year. Neutra’s style was marked by airy geometric spaces and the "ready-for-anything" plan - focusing on a multi-functional open floor plan that can be adapted for different lifestyles or events. He was known for his focus on the client’s needs rather than imposing his own will, using detailed questionnaires that sometimes surprised the clients. He mentored several successful architects who went on to further popularize the West Coast variation on the Mid-Century Modern. Among the numerous homes he designed in Los Angeles, twelve have been designated Historic Cultural Monuments.

Located in Tujunga in the foothills of the Verdugo Mountains about 30 minutes from Downtown Los Angeles, the $9.799 million listing offers the opportunity to own both the original Neutra home and a contemporary home designed by multiple award-winning architect Michael Maltzan. The Neutra home has 1,350 square feet, two beds, and one bath. It was far ahead of most of the 1950’s California modern homes with a floor-to-ceiling glass front that takes advantage of the property’s mountain and city skyline views. Cherry wood, creamy walls, a stone fireplace and Neutra-designed built-ins - including a sofa system with record player and concealed speakers, multiple desks, shelving systems, dining room table, sliding breakfast nook and vanity - make this home unique even 70 years after it was built.

Nearly half a century after the Neutra home, the Maltzan-designed primary residence was added, preserving the compound’s geometric aesthetic with a striking seven-sided design with an interior courtyard. Lots of glass let in natural light and breathtaking views from every side while blonde hardwoods enhance the airy, inviting feel. The primary suite opens on the courtyard and features a curvilinear, penny-tiled bathroom. An office and den complement the home’s three bedrooms. The home’s unique design allows seamless flow between the indoor and outdoor spaces. A spiral staircase, balconies, lots of built-in storage and unexpected angles enhance the residence’s cutting-edge style.

An extraordinary curated succulent garden spans the compound’s 5.7 acres. A pebbled path leads through the garden to the 50-foot lap pool and its shaded lounge area decorated with beautiful cactuses. An outdoor movie pavilion with windscreen and a catering kitchen make movie nights extra special. A unique angular, one-bedroom cabin with outdoor shower designed and built by artist Peter Staley completes the compound.

Alone on a hilltop, the estate provides extraordinary privacy and a short commute to the Los Angeles Eastside destinations of Pasadena, Los Feliz and Silver Lake. Nestled against the Angeles National Forest, it offers close access to numerous hiking trails and nature areas plus the Angeles National Golf Club. It is only a 20-minute drive from the Hollywood Burbank Airport.

Although not generally a haven for celebrities, Tujunga has served as the location for E.T. the Extra-Terrestrial, Ben Hur, Tarzan and numerous other movies and television series.

The listing is held by Sherri Rogers, Elisa Ritt and Anthony Stellini of Compass and Asher Ehsani of Uhler Mortgage Solutions. 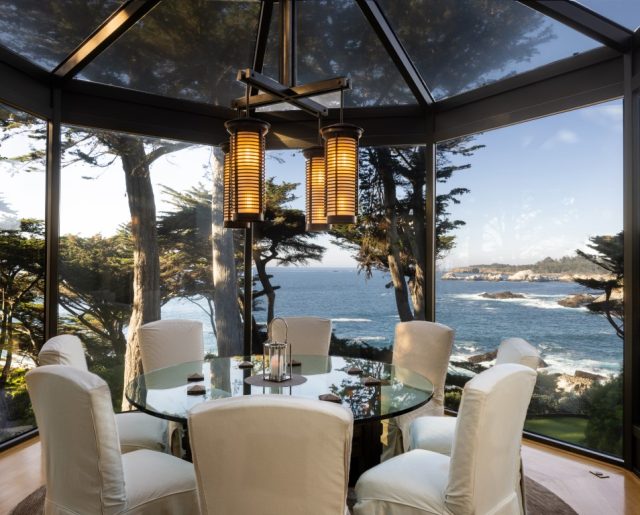