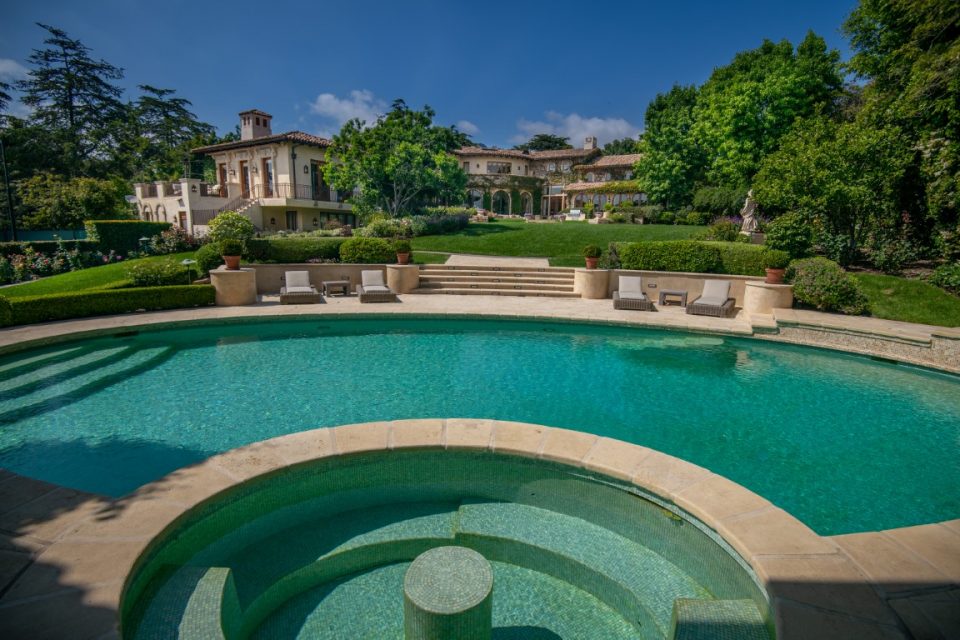 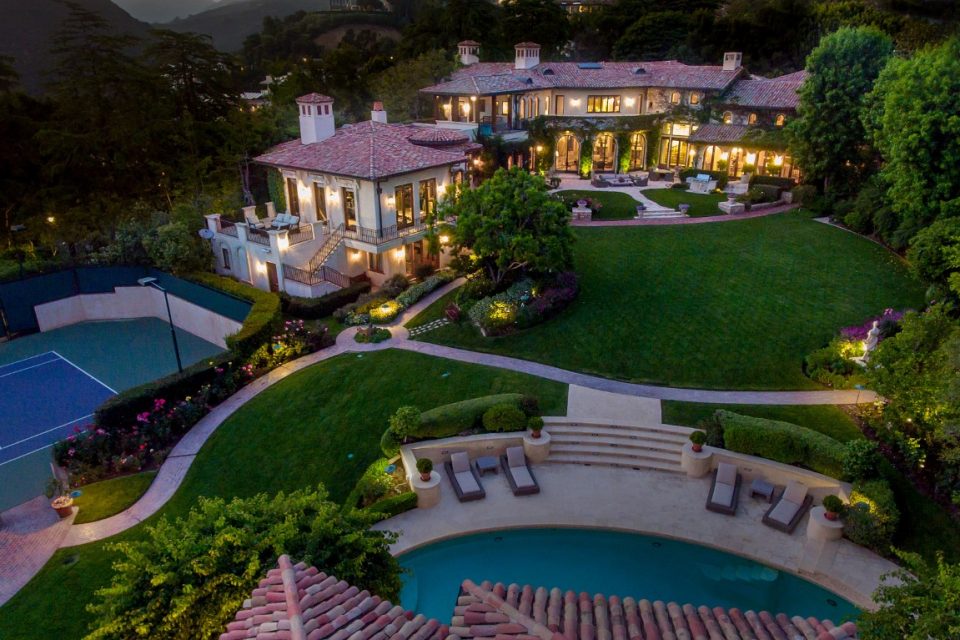 ‘Boxer of the Decade’ Sugar Ray Leonard has recently listed his beautiful Pacific Palisades mansion for $46.5 million. The home was previously on the market in 2019 at $52 million. 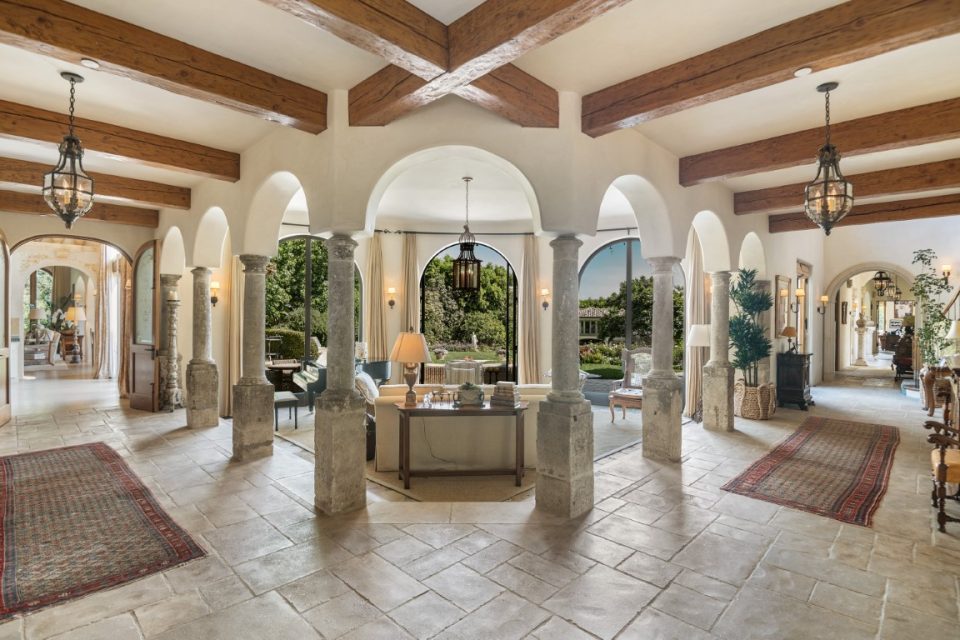 Measuring in at 16,773 square feet with seven bedrooms, it was designed with different wings having planned space for various types of entertaining. 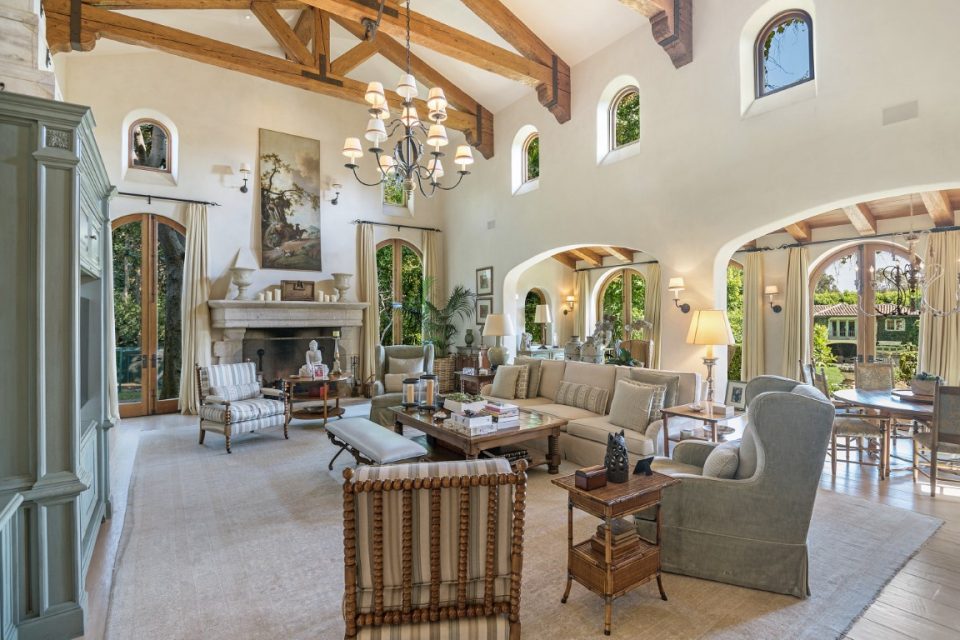 Fireplaces throughout were imported from Europe and the stone floors from Jerusalem. 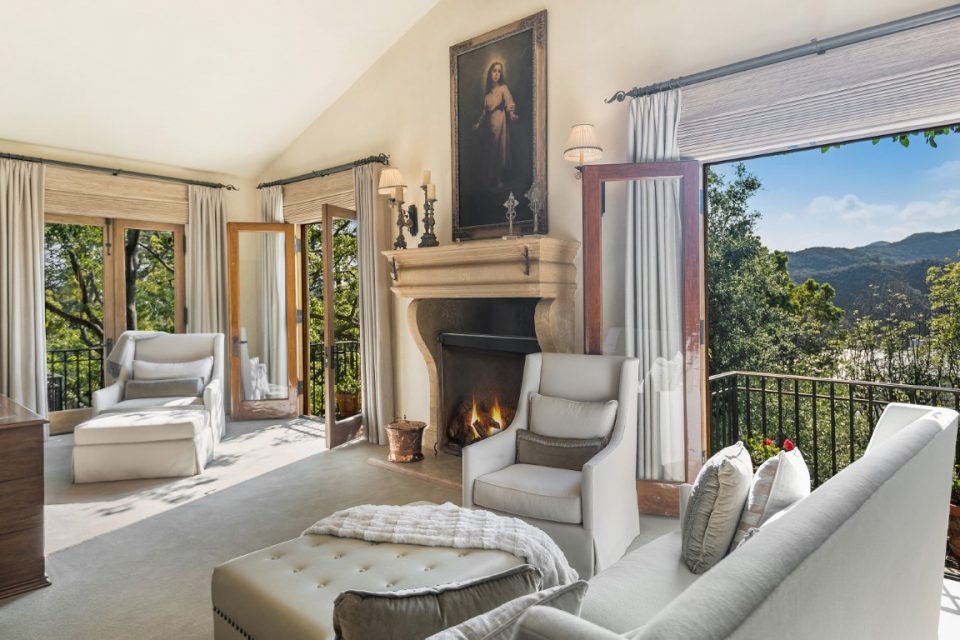 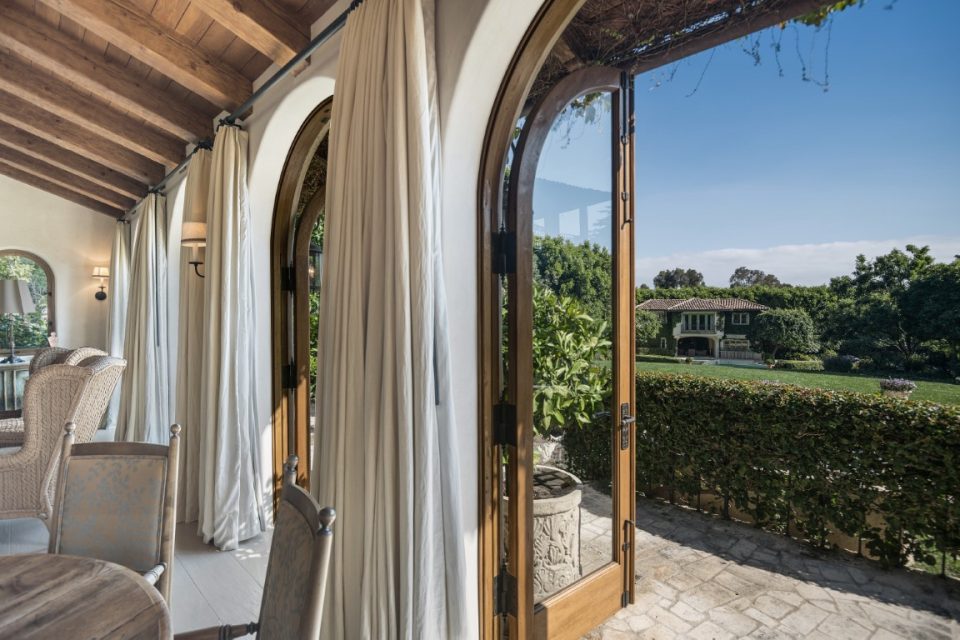 It is built in the style of Italianesque old-world architecture, 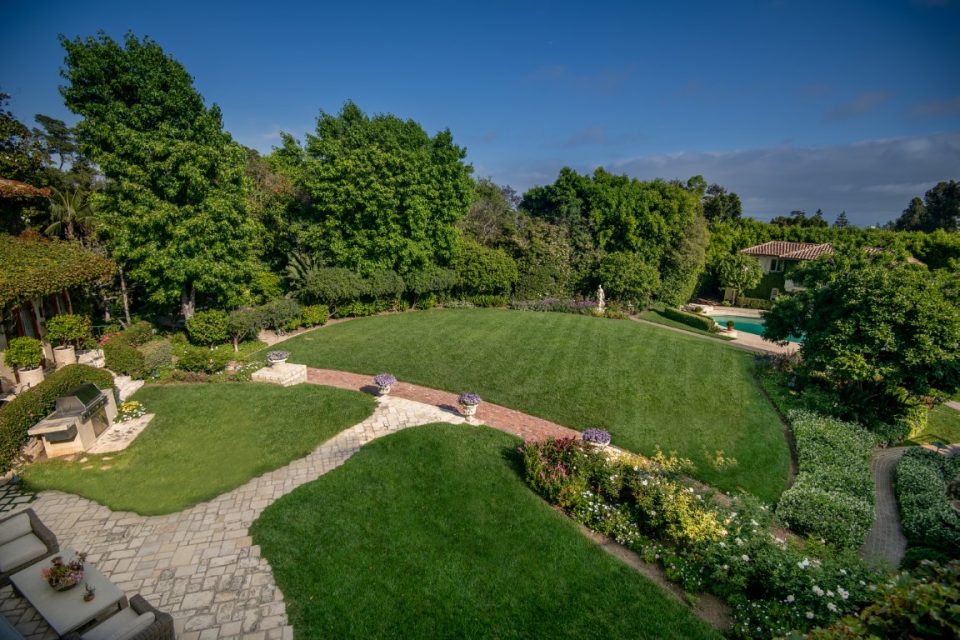 The home and guest house are set on rolling lawns, terraces and lush landscaping. 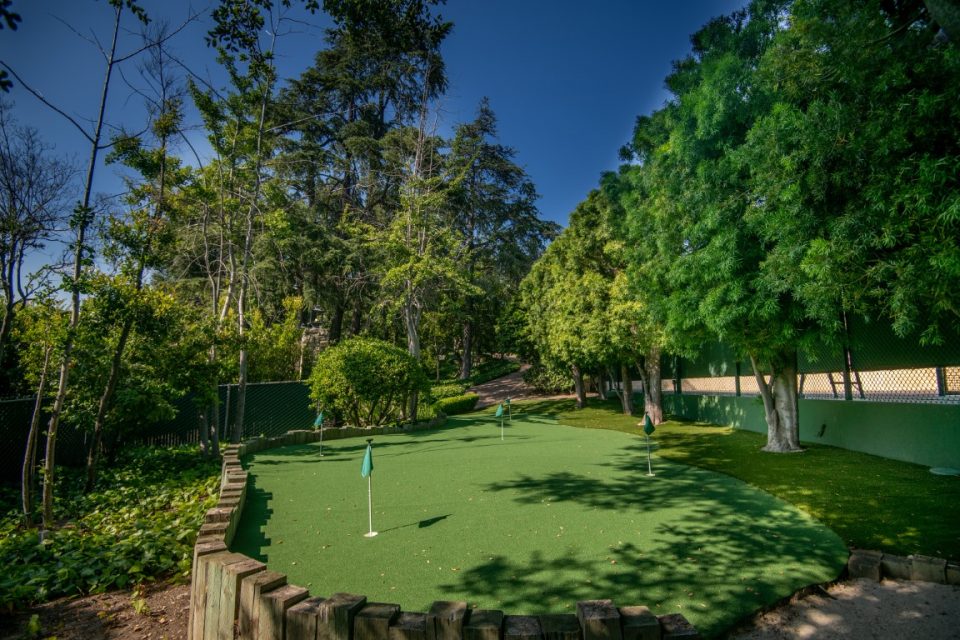 Grounds include a pool, spa, putting green and tennis courts. 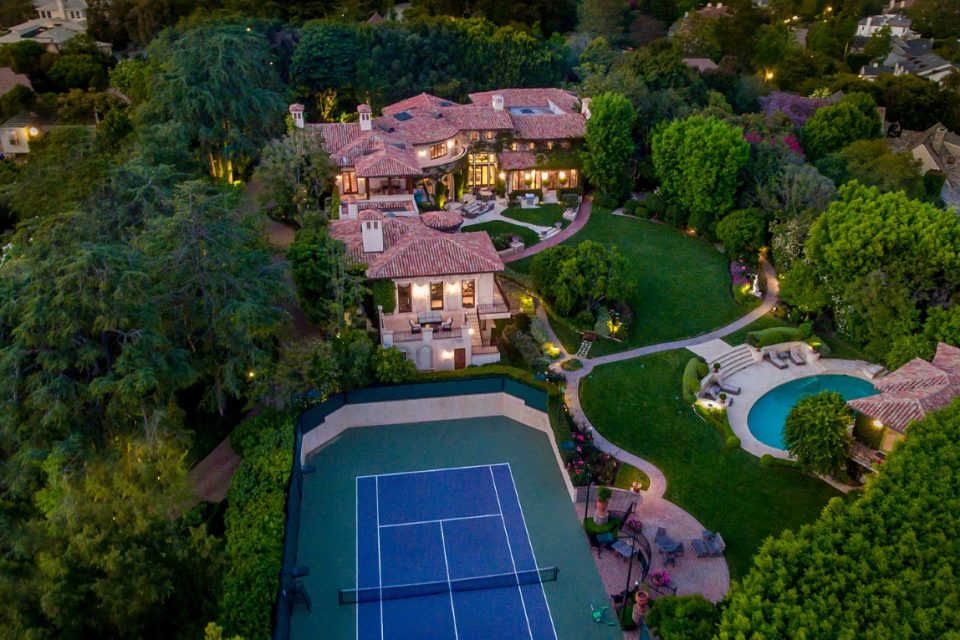 Both inside and outside are equally stunning and provide multiple features and venues for entertaining. 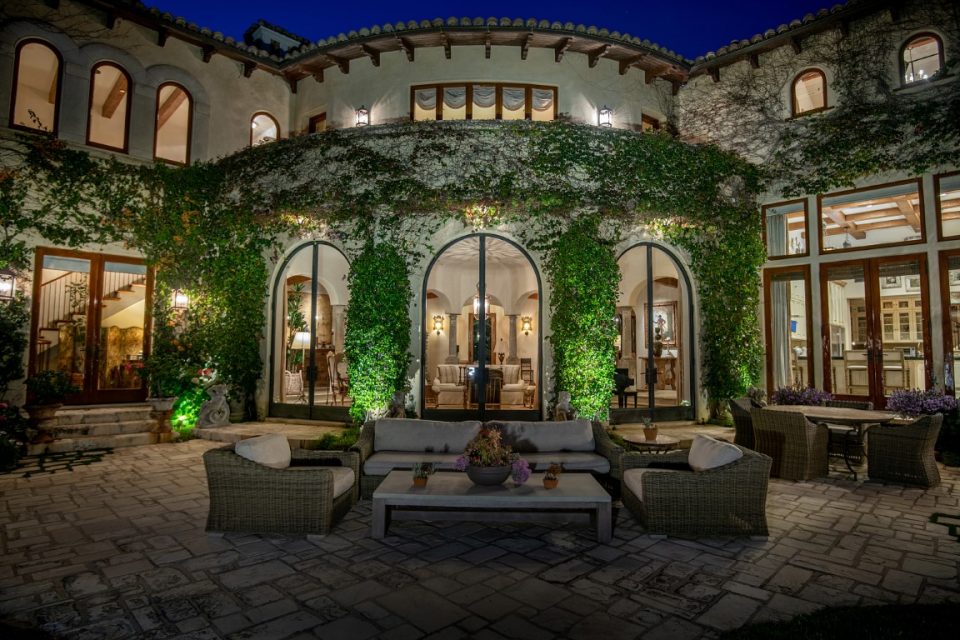 The main outdoor terrace with its nighttime mood lighting is a romantic spot for conversation.

Gold Medal boxing champion for the United States at the 1976 Montreal Olympics, named ‘Boxer of the Decade’ in the 1980s and the first professional boxer to win more than $100 million in purses, Sugar Ray Leonard is one of the wealthiest boxers in the world with an estimated net worth of $120 million. He has recently listed his beautiful Pacific Palisades mansion for $46.5 million.

Had it not been for his brother Roger, Sugar Ray would likely be just a regular guy named Ray Charles Leonard. However, Roger loved boxing so much he convinced his local recreation center in North Carolina to start a boxing program and goaded his brother, Ray, into taking it up as a sport. Little did Roger know that his brother would become one of the biggest names in boxing history.

Sugar Ray electrified the boxing world both as an amateur in the Olympics and a pro in memorable fights against Roberto “No Más” Durán, Thomas “Hit Man” Hearns and Marvelous Marvin Hagler, finally retiring in 1997 after winning world championship titles in five different weight classes. With his charismatic personality, Leonard has been a longtime boxing announcer for HBO, ESPN, ABC and NBC, a sought-after motivational speaker, made television commercials for Coca Cola, Ford and 7 Up, and has dabbled in acting. His television appearances include Half & Half, L.A. Heat, Married with Children, Renegade and Tales From The Crypt. Ray has also appeared on the big screen in I Spy and The Fighter. As godfather to Khloé Kardashian, he has appeared in Keeping Up with the Kardashians numerous times. He also devotes much of his time to a number of charitable foundations, especially juvenile diabetes.

In 1993, Leonard purchased just under two acres of land in Pacific Palisades with ocean and canyon views and, in 1997, he and his wife, Bernadette, built their dream home. Measuring in at 16,773 square feet with seven bedrooms, it was designed with different wings having planned space for various types of entertaining from small intimate gatherings to full-blown fundraisers. Built in the style of Italianesque old-world architecture, the exterior of the house is covered with ivy and the entrance opens into a grand foyer and center hall opening to the various formal rooms. Fireplaces throughout were imported from Europe and the stone floors from Jerusalem. There is a chef’s kitchen with professional appliances and center island with breakfast bar that adjoins the family room. Included is a solarium, a media room, large gym and a master suite with fireplace, large bath and walk-in closets, and a balcony that takes advantage of the views. Grounds include a pool, spa, putting green and tennis courts all set on rolling lawns, terraces and lush landscaping. The detached two-story guest house by the pool has a first-floor kitchen and entertaining space, while the second floor contains a guest bedroom and bath.

Considered to be America’s equivalent to the French Riviera, California’s Pacific Palisades was founded in 1922 and has drawn many celebrities seeking a slightly quieter life than Hollywood. Some of its current residents include Brooke Shields, Michael Douglas and Catherine Zeta-Jones, Adam Sandler, Billy Crystal, Kate Hudson and Steven Spielberg. Former residents include Cary Grant, Matt Damon, Barabara Hutton and David Selznick. Downtown has excellent restaurants, boutiques, yoga facilities and home decor shops as well as purveyors of luxury brands.

The Leonard Estate is co-listed with Jade Mills, Coldwell Banker and Drew Fenton of Hilton & Hyland. 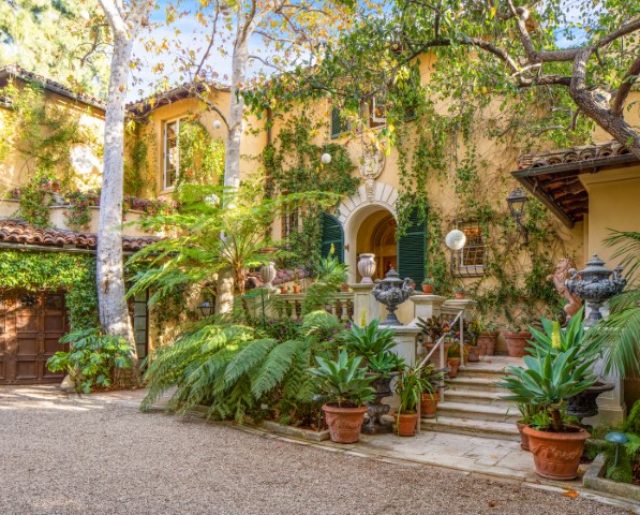 One of Bel Air’s prettiest homes, Il Sogno (the dream), has come on the market at $45 million. Home to...Read More