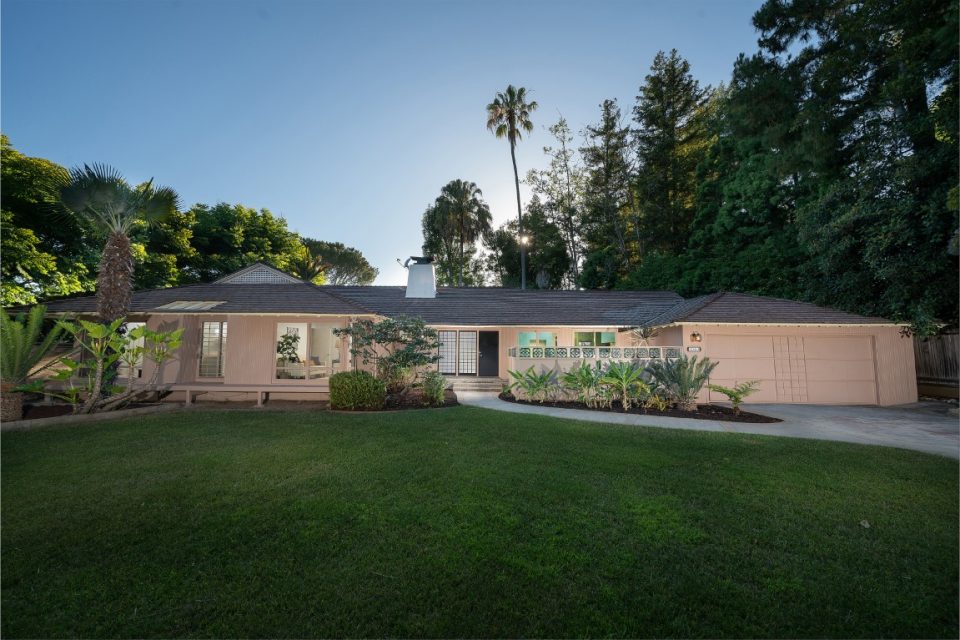 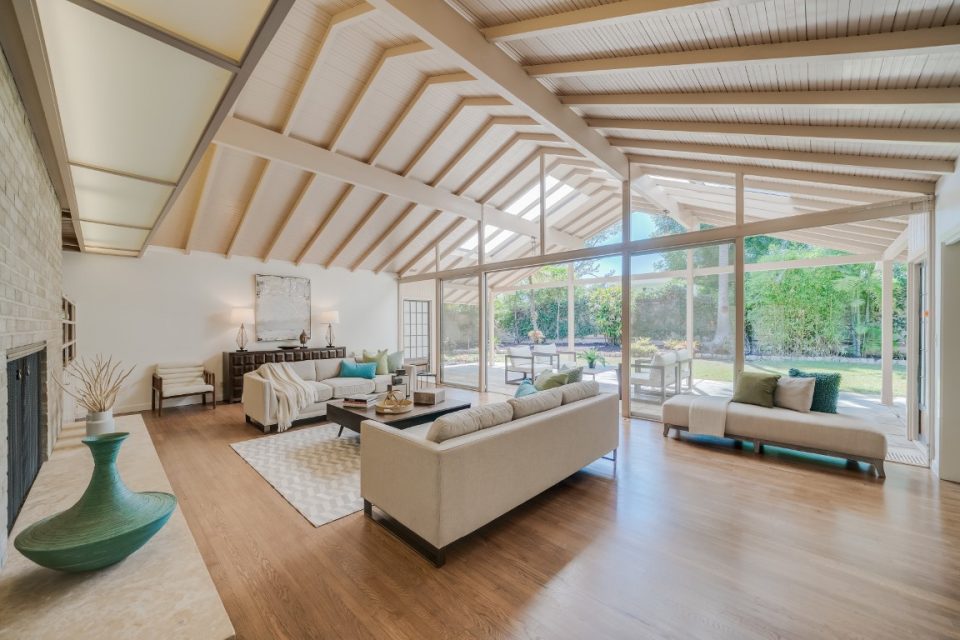 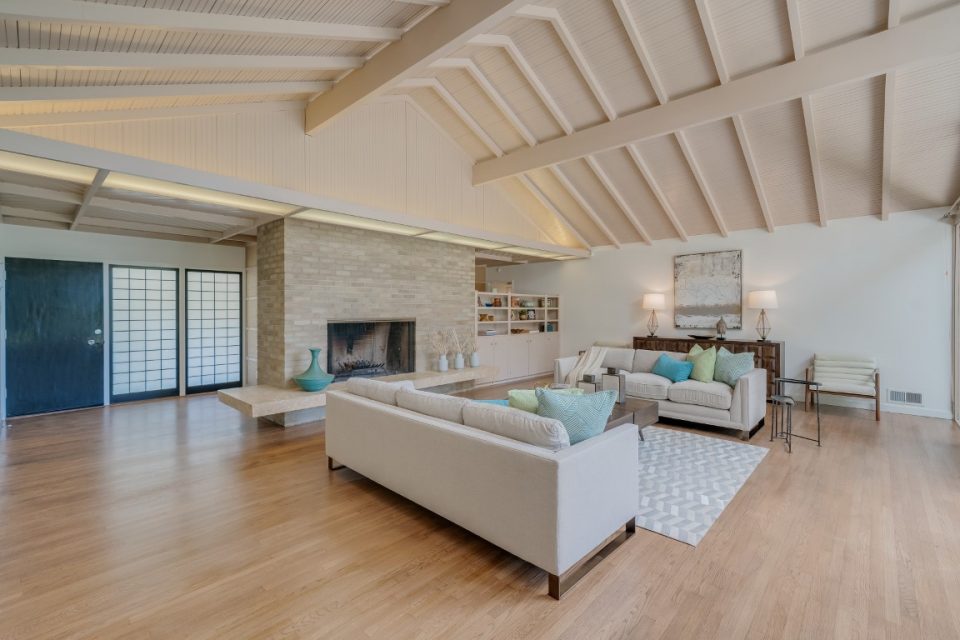 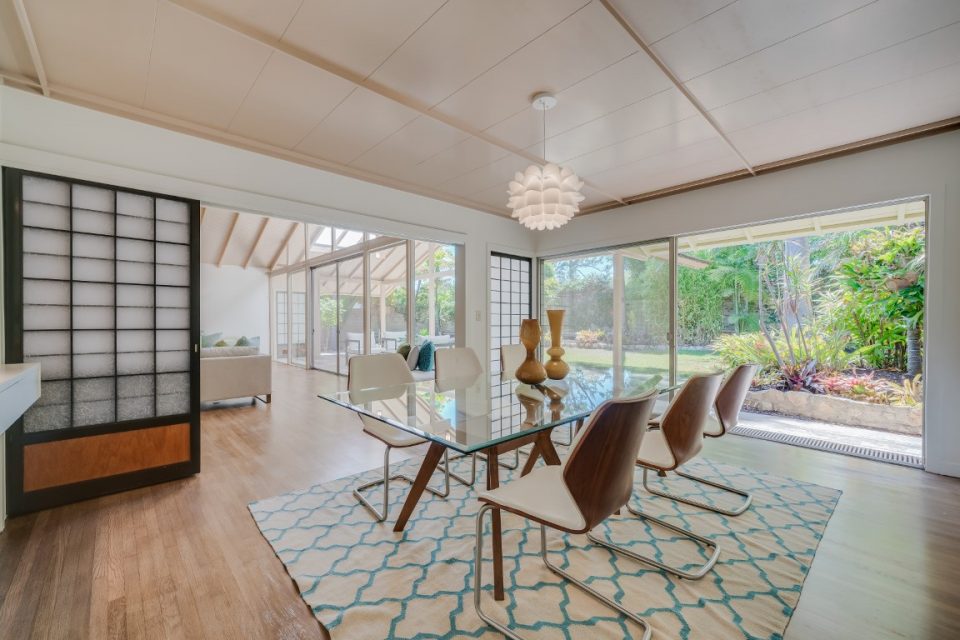 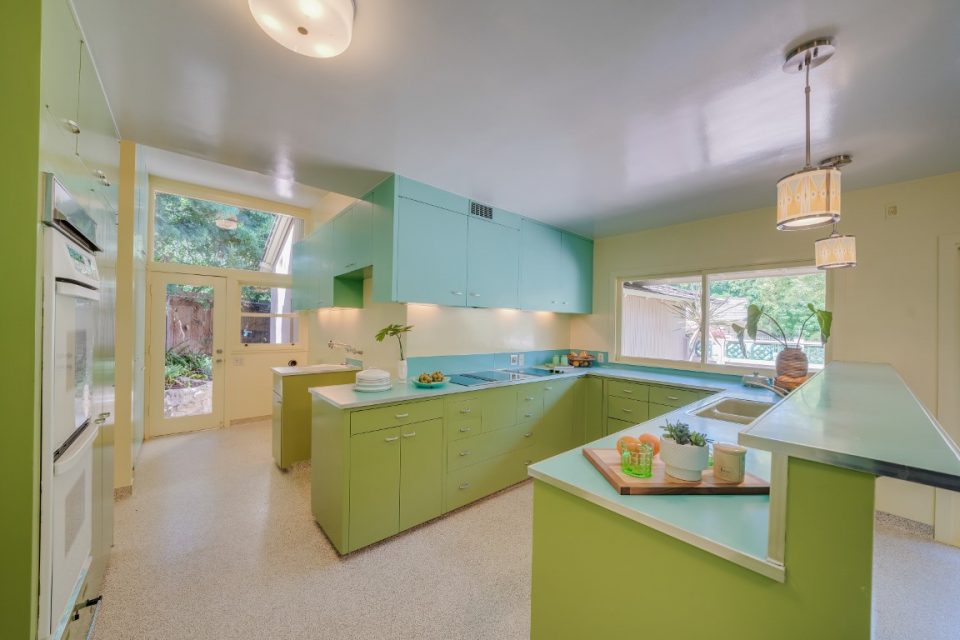 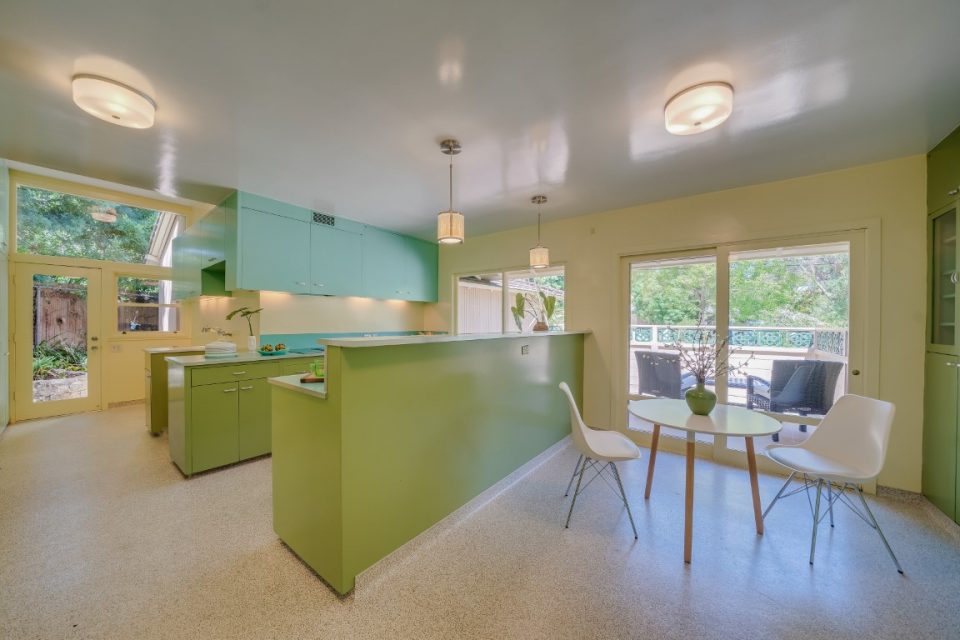 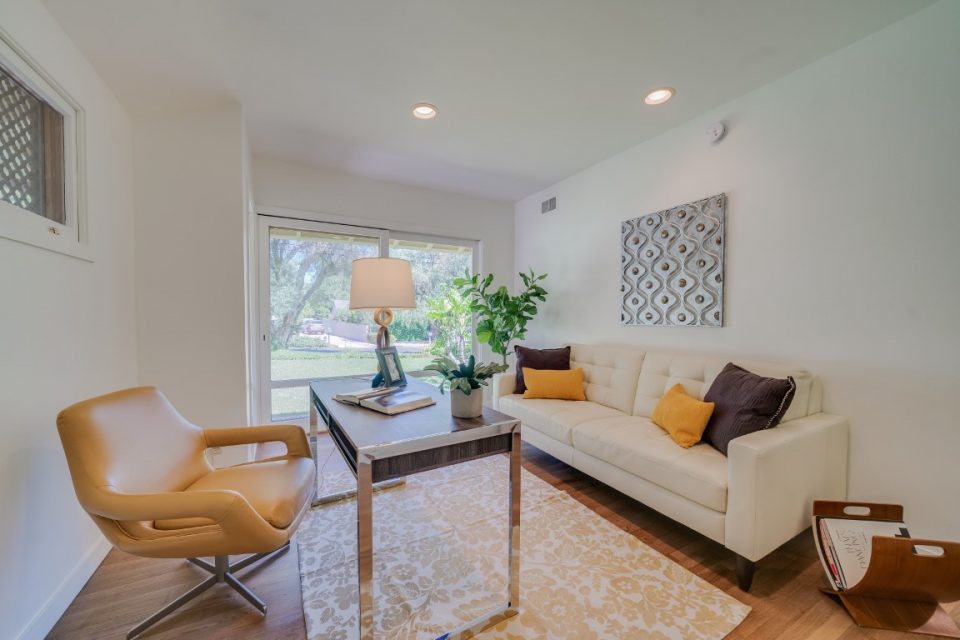 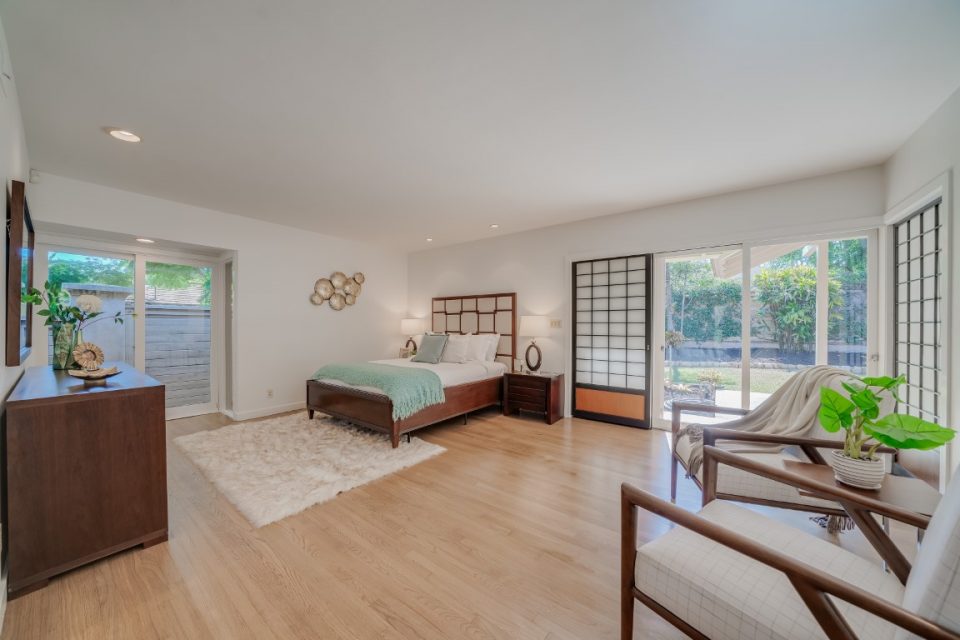 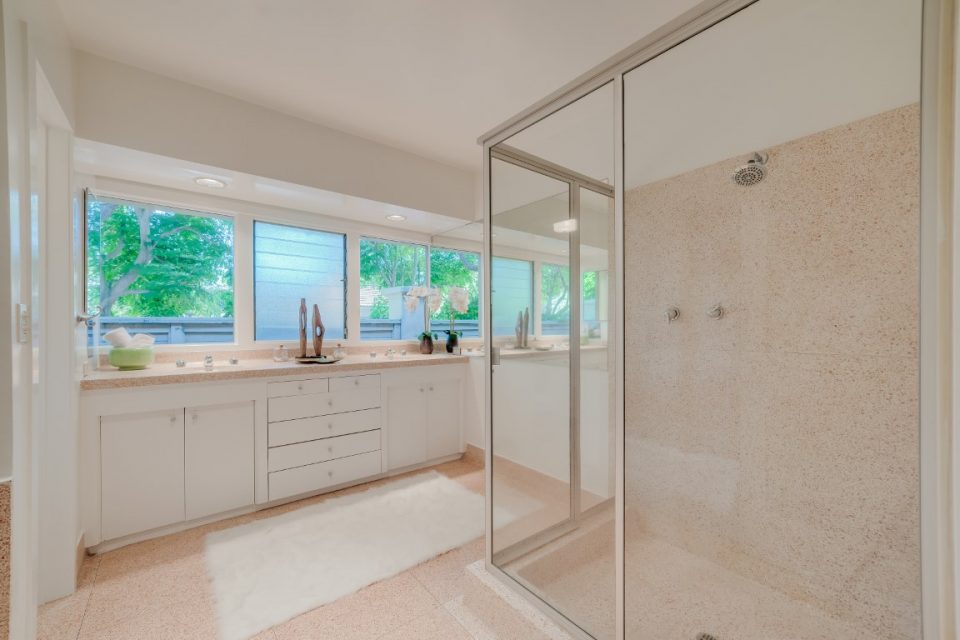 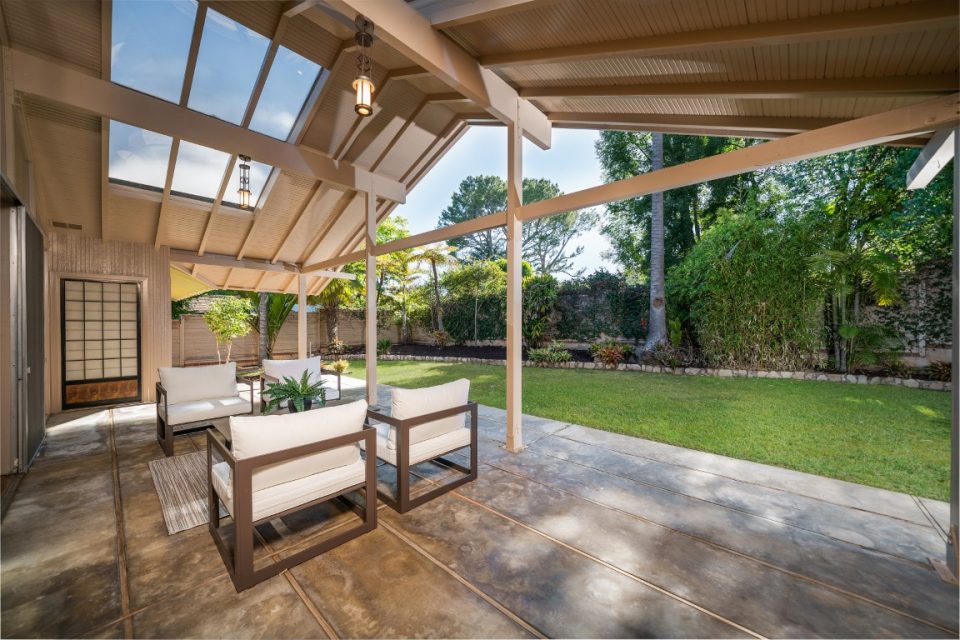 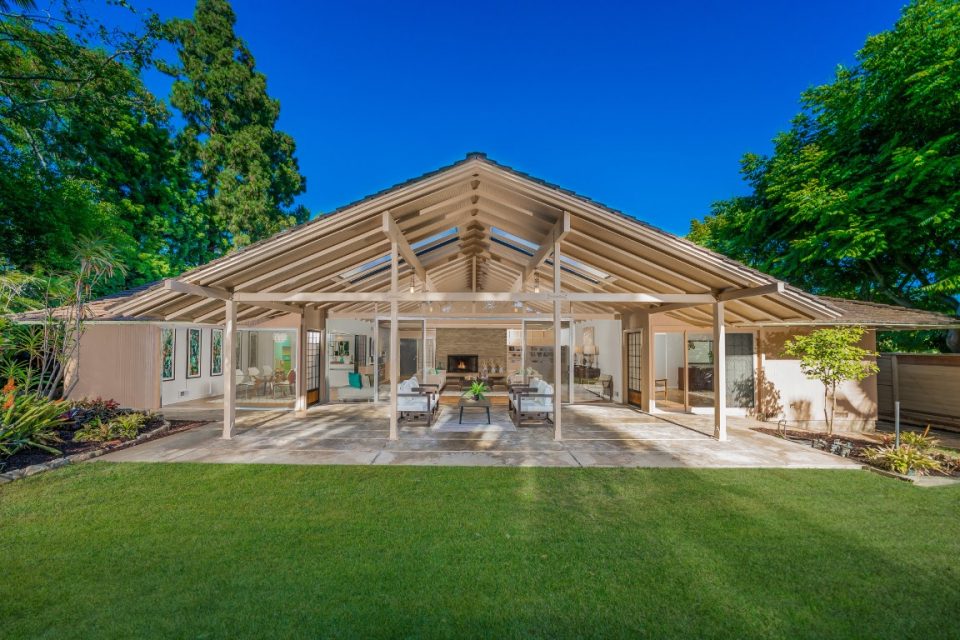 For the first time in 65 years, welcome to the inside of the “Miami” home of TV’s The Golden Girls. Although the lush subtropical landscaping surrounding the home was in keeping with the Miami environment, where the golden girls supposedly lived, the house itself was actually located in Los Angeles.  While we were convinced that the comedic adventures of Blanch, Dorothy, Rose and Sophia took place inside the home we knew so well from the outside, in fact it was a set and not the original house.  Now we have the opportunity to see that the actual house is far larger in volume and is a mix of mid-century modern, Japanese and Hawaiian architecture cleverly designed to reap the most from the mild California climate.  Now for sale by the estate of the original owner, The Golden Girls TV home is priced at $2.9 million.

Still going strong on cable television 28 years after the final episode, the sitcom that ran from 1985 through 1992 and won more awards than almost any TV comedy on record, revolves around three slightly-over-middle-aged women who find themselves single again, plus the elderly mother of one, who struggle to be viable in a youth-oriented world.  Add the four strong characters, Dorothy, the sensible one, Rose, the innocent airhead, Blanch, the consummate man-crazy flirt and Sophia, the spry, sometimes too active mother of Dorothy, and their interactions between each other, and the script’s formula was a hands-down winner.  The actresses: Bea Arthur, Betty White, Rue McClanahan and Estelle Getty each received at least one Emmy Award for their work on the show.

Little did we know that the real interior of The Golden Girls house had a completely different interior than that of the set.  Instead, the 2,901-square-foot, four-bedroom, four-bath Brentwood home has huge open rooms and tall vaulted ceilings enjoying the feeling of wide-open space, unlike the small-cozy rooms we came to know through the sitcom.  Built in 1955, the Hawaiian architectural firm of Johnson and Perkins created a mid-century-modern home with Japanese and Hawaiian design vibes.  Original design features include floor-to-ceiling glass, oak floors, sliding Japanese shoji screens eliminating the need for drapes, and a wonderful green-and-turquoise kitchen cheerfully displaying the epitome of a cool 1970’s look.  The Hawaiian element brings the outdoors in with vanishing threshold and large covered patio with skylights to protect from the occasional raindrop.

For the first time in 65 years, the true interior of The Golden Girls sitcom house can be seen by the public.  Now for sale and priced at $2.9 million, it is guaranteed to give the new owner many years of party-conversation topics.  The listing agent is Rachelle Rosten of Douglas Elliman, Beverly Hills. 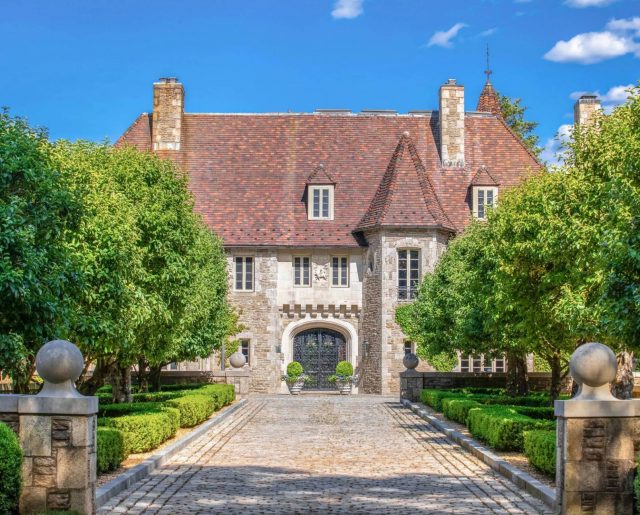