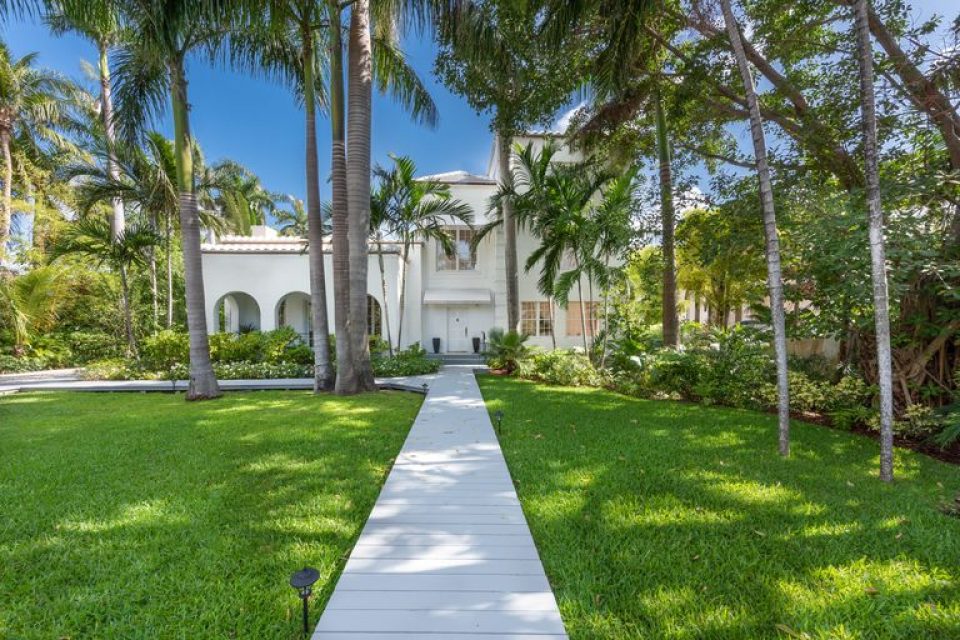 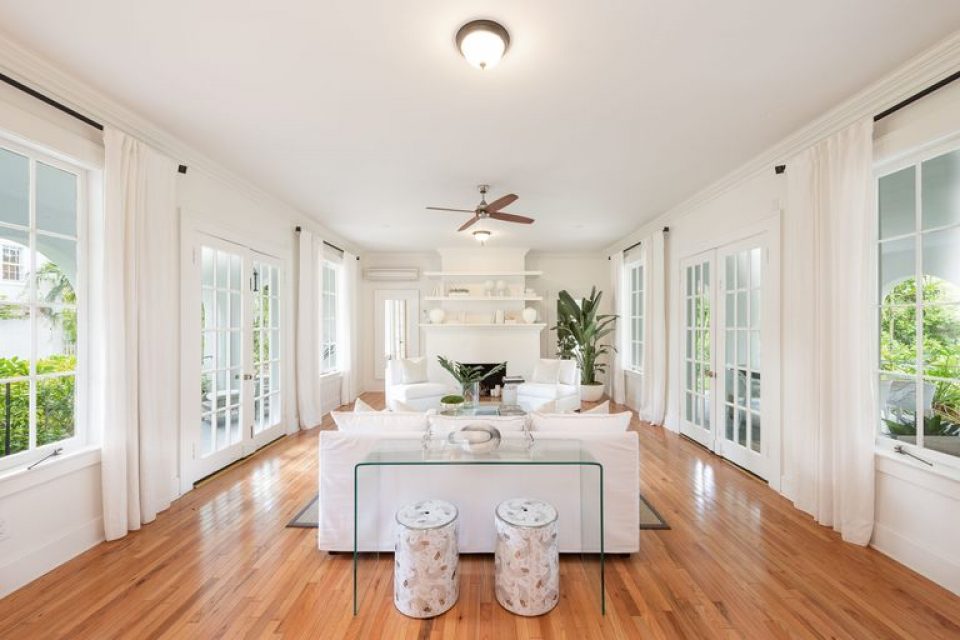 Almost all Miami houses of the era had a fireplace to warm the few winter chills. 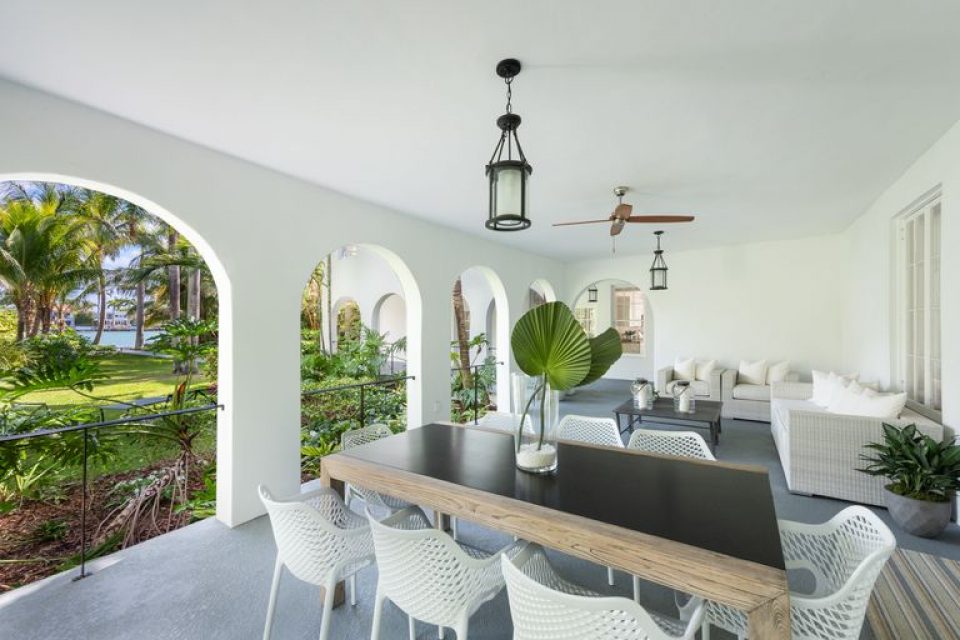 Dining was Florida-style outdoors with a breeze off of Biscayne Bay. 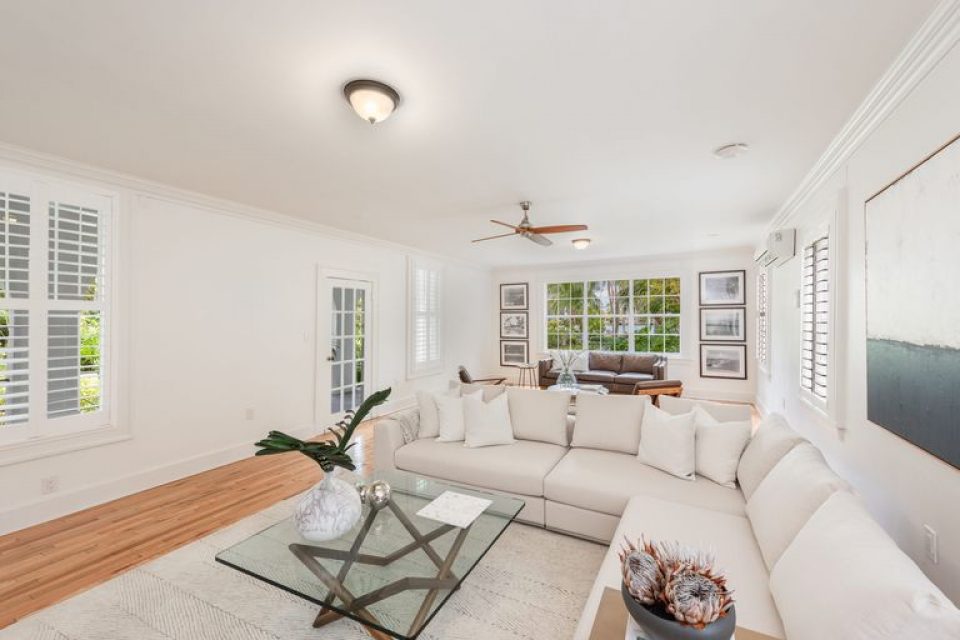 The large living room welcomed many of Capone's infamous guests. 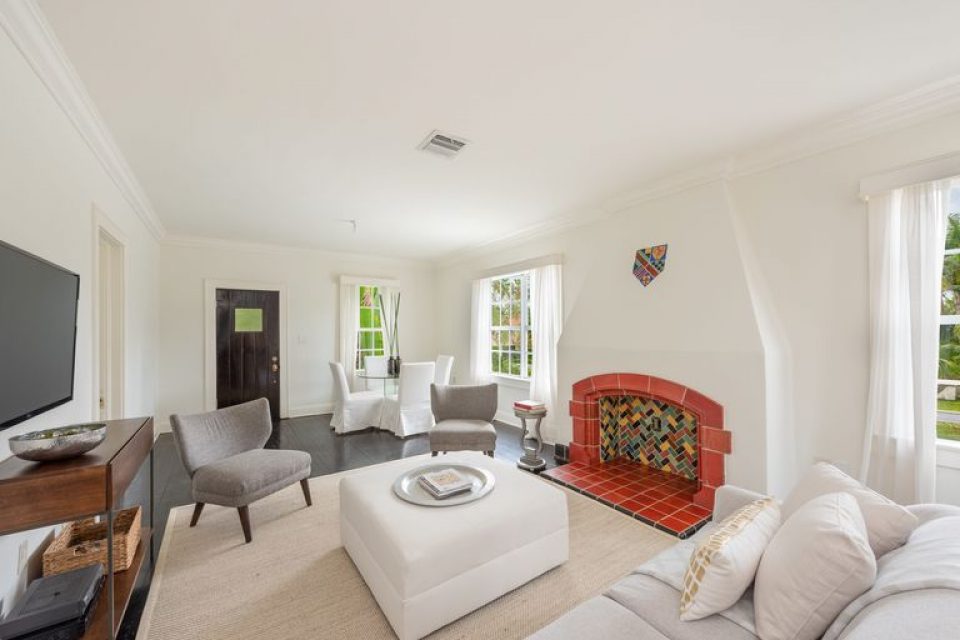 A smaller family room displays colorful tile patterns in the fireplace. Patterned and solid tiles were used in 1920s Florida architecture on floors and in kitchens. 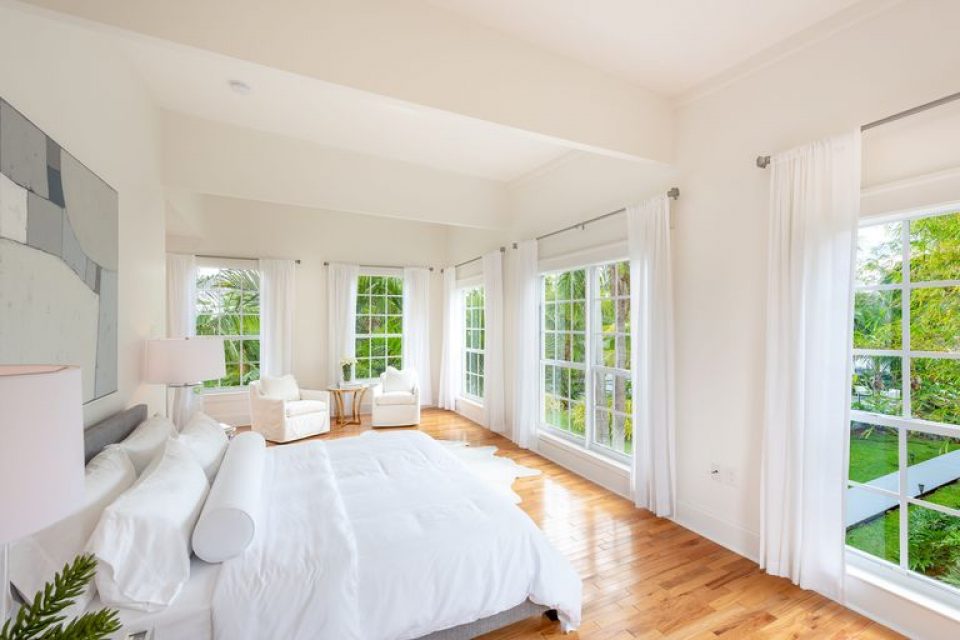 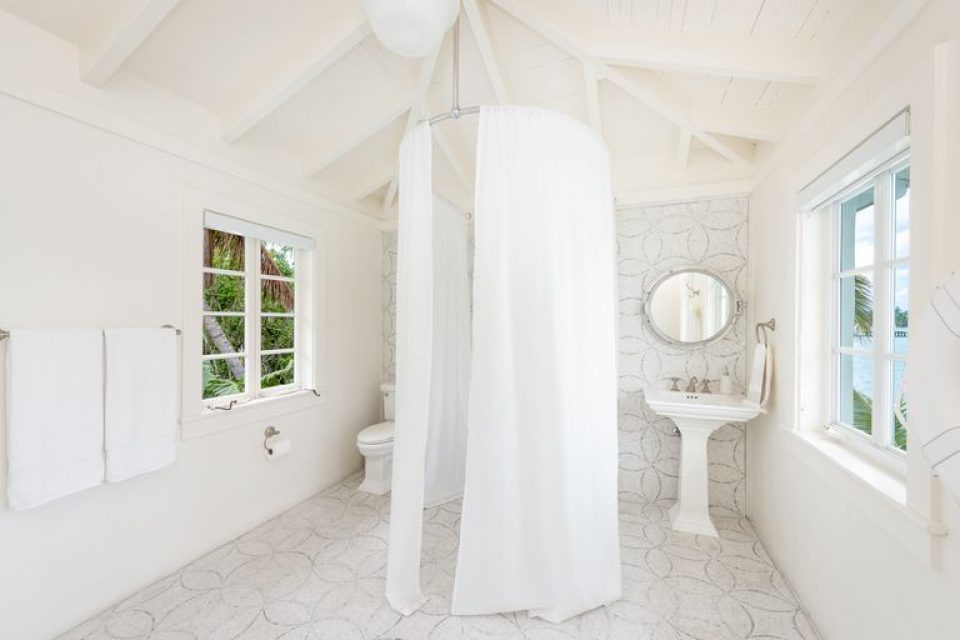 The master bath is sunny and bright with classic fittings. 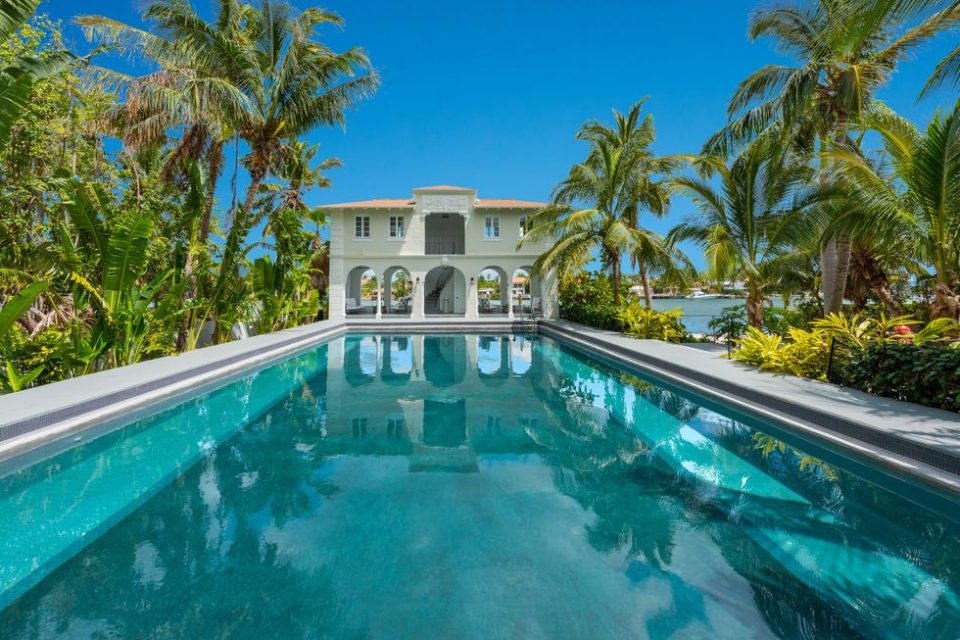 The guard house is at the end of the pool at the edge of the Bay to protect Capone from incoming boats. 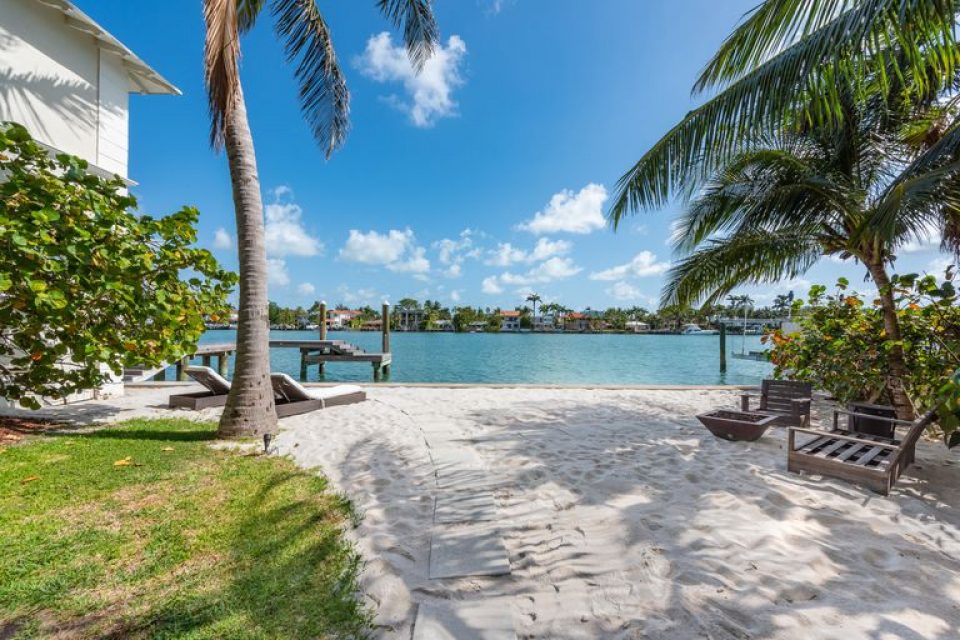 There is boat launching access to the Bay running along the side of the property. 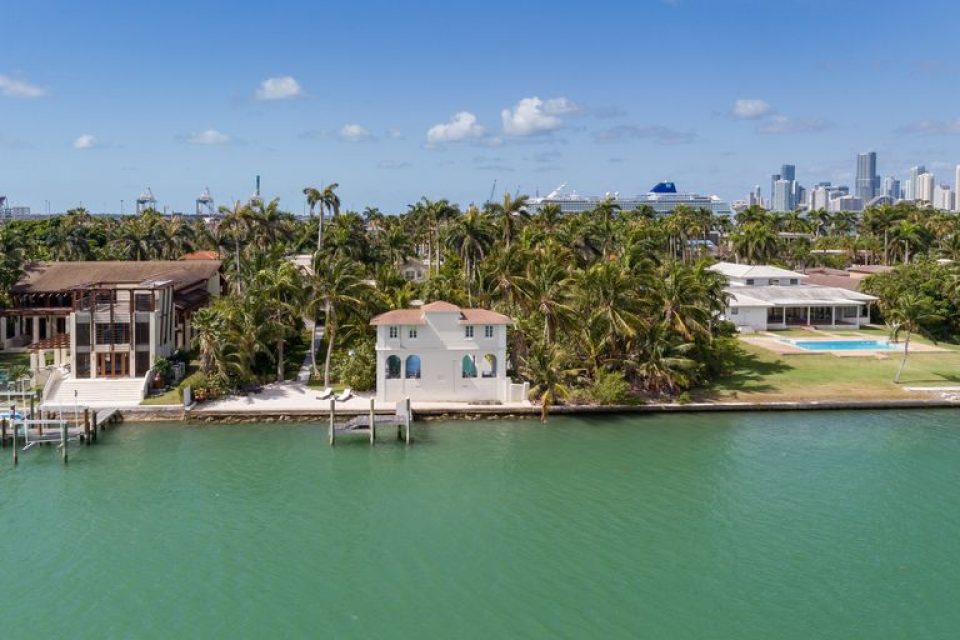 A waterside view of the Capone home. 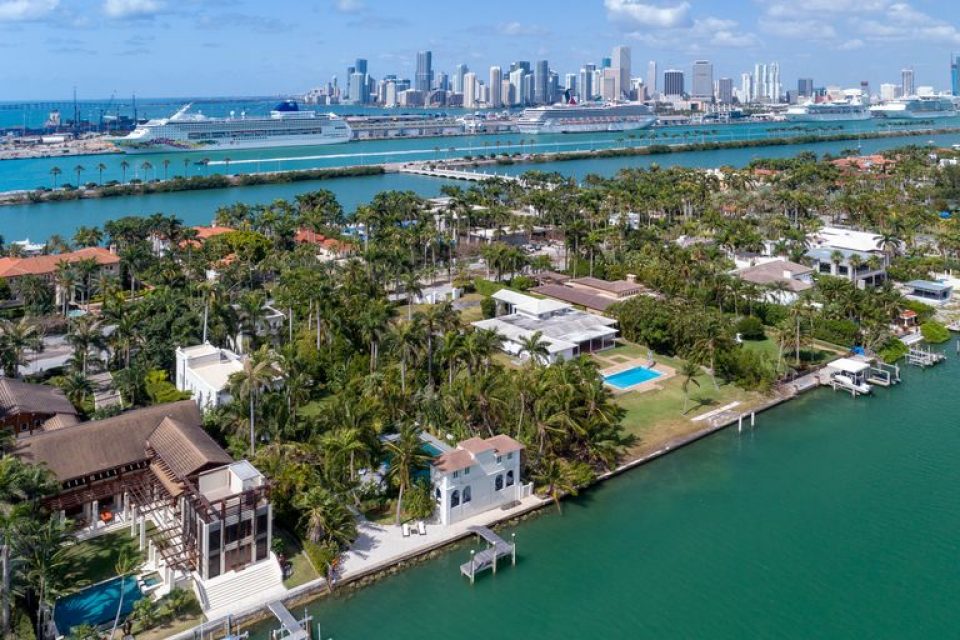 This aerial view shows Palm Island's proximity to the Port of Miami on Dodge Island.

In 1928, Miami Beach’s polite society was rocked with the news that the infamous gangster, Chicago crime boss Al Capone, had purchased a home on Palm Island, one of the city’s newest and most prestigious addresses.  Much to the consternation of the city fathers, local organizations and even the state governor, Capone continued to live there until his death in 1947, and his wife, Mae, held onto the house until 1952.  For decades, accounts of Capone’s connection with the home and Miami Beach have been a colorful part of the city’s history.  However, it has recently been purchased by a developer for $10.75 million, who will likely tear it down and replace it with a two-story modern spec home.

During the early development of Miami Beach, causeways - roads built on landfill and bridges - spanned the distance over Biscayne Bay from Miami to Miami Beach.  Developers also dredged the bay to create man-made residential islands extending off the causeways.  With only one gated entry and exit to each island and heavy police security, homes were considered to be very secure.  It was an ideal location for Capone and he bought the 1922 home at a distressed sale price of $40,000, two years after the Great Miami Hurricane of 1926 that wiped out much of the city.  He then poured $200,000 - over $3 million in 2021 dollars - to install a gatehouse, a seven-foot-high wall, searchlights, cabana and coral rock grotto.  For additional security, he had guards posted on the second floor of the cabana to protect him from anyone arriving by boat and also at the gatehouse.  Safe and secure from his Chicago crime rivals, it was the home where Capone was vacationing, and his alibi, when his gang pulled off the 1929 Saint Valentine's Day Massacre. Capone returned to the home after he was released from prison in 1939, and where he lived until he died in 1947.

The Capone home with 6,077 square feet, four bedrooms and a pool has been through several changes in ownership over the years, now owned by the same South Florida developer, Todd Michael Glaser, who recently purchased and then demolished Jeffrey Epstein’s Palm Beach mansion. Similar to the Epstein setting, Capone’s home is on a prime waterfront lot that Glaser plans to tear down and replace with a modern two-story home with eight bedrooms, eight bathrooms, a Jacuzzi, spa and sauna.

Still one of Florida’s most upscale neighborhoods with home prices ranging from about $20 million to over $40 million, Palm Island and its close neighbors Hibiscus Island and Star Island are accessed from MacArthur Causeway that traverses Biscayne Bay from Brickell Avenue on the Miami side to South Miami Beach.  It is conveniently located for easy access to South Beach, Key Biscayne and Coconut Grove with a plethora of restaurants, upscale shopping, white-sand beaches and entertainment venues both on the mainland and Miami Beach.  Many celebrities have also made these islands home, such as Gloria Estefan, Don Johnson, Rosie O’Donnell, Sean Combs, Shaquille O’Neal and Phillip Frost. 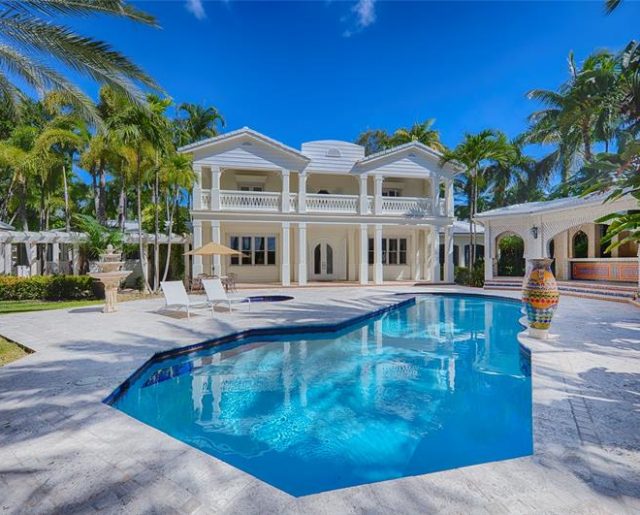 He already owns one Star Island home that he bought in 2003, and TMZ has just learned that Diddy is...Read More