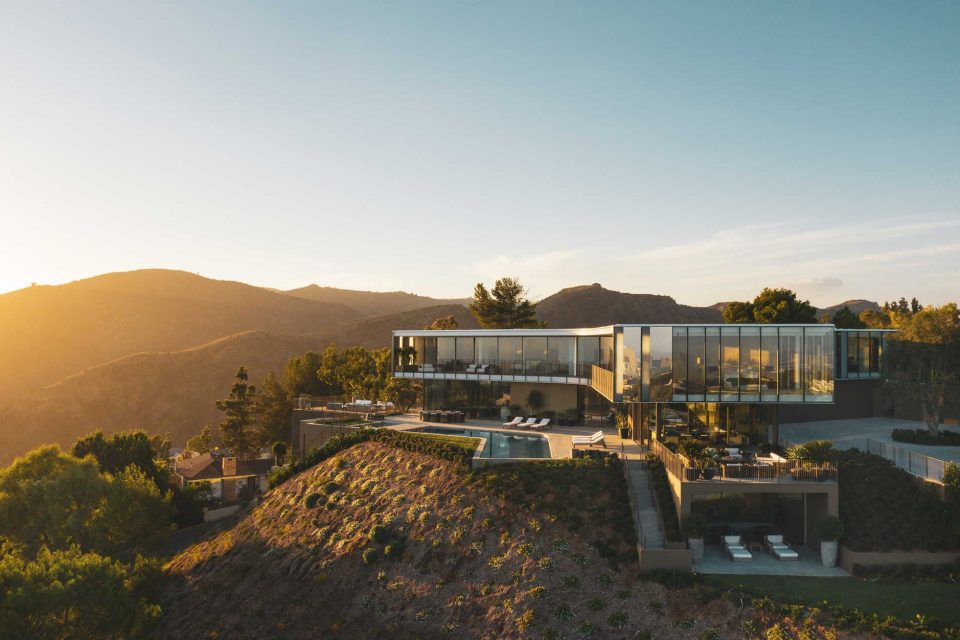 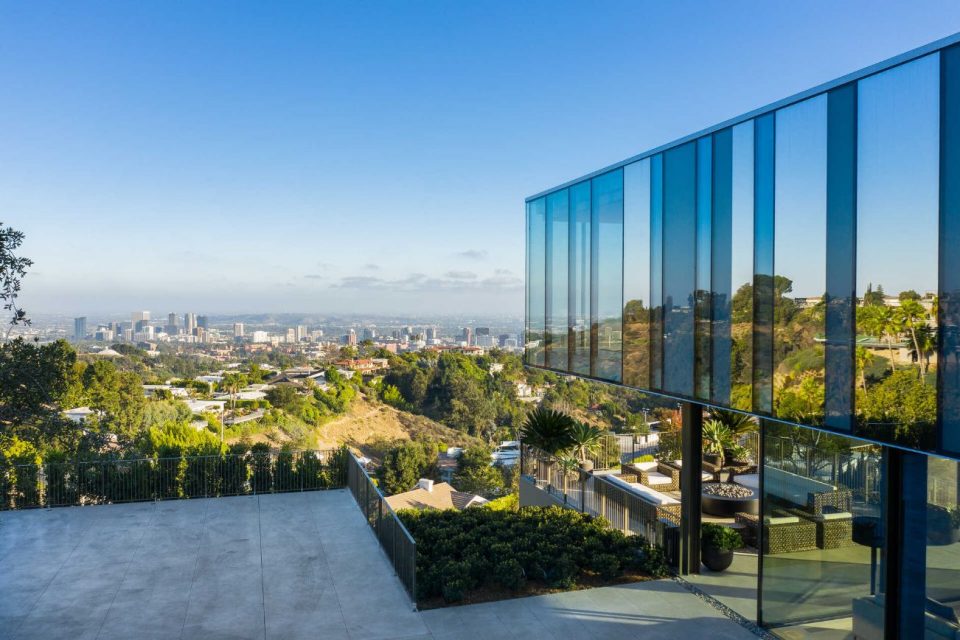 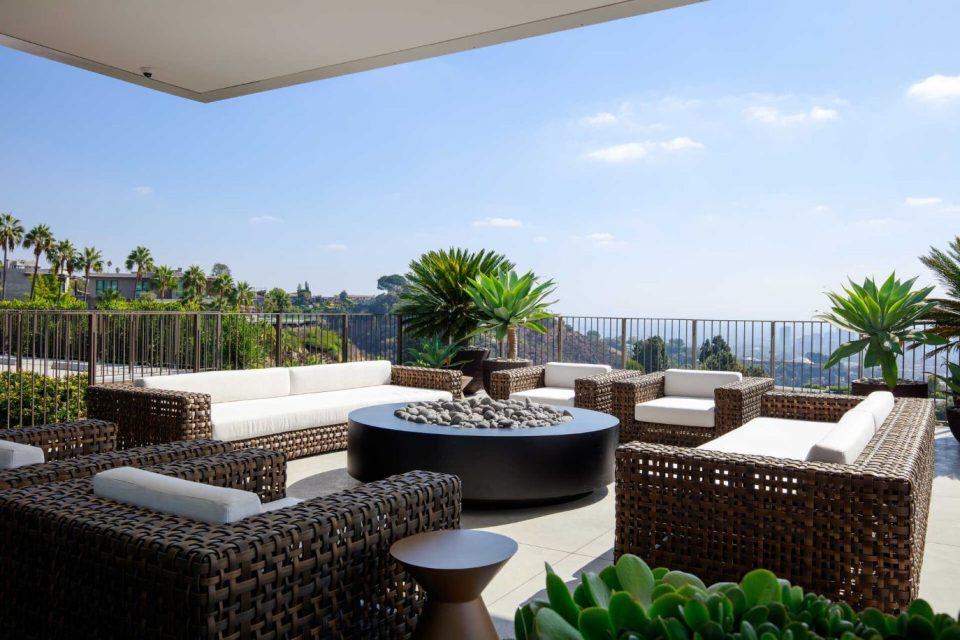 The mansion is an exceptional entertainment space with multiple decks. 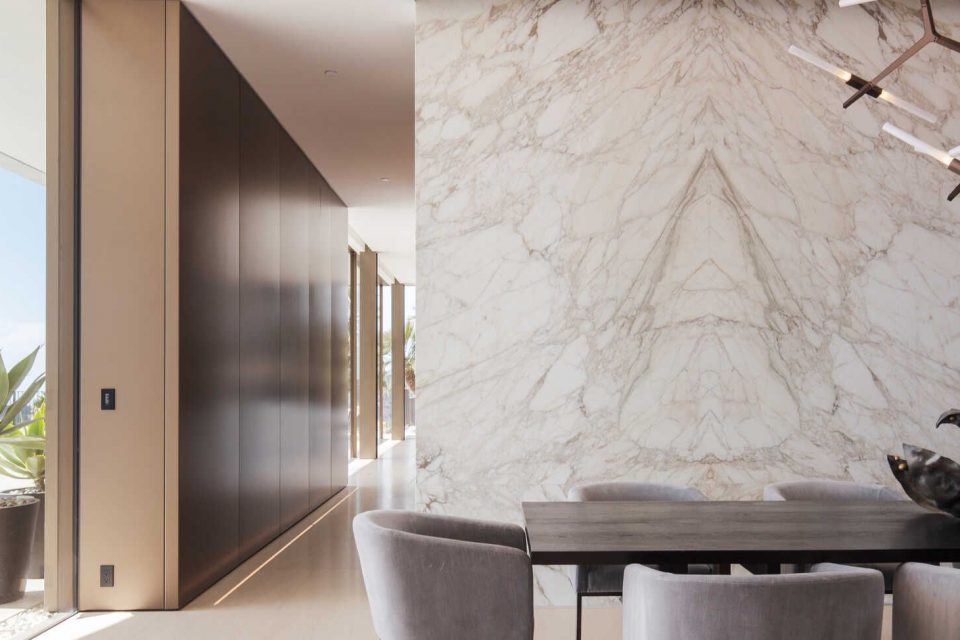 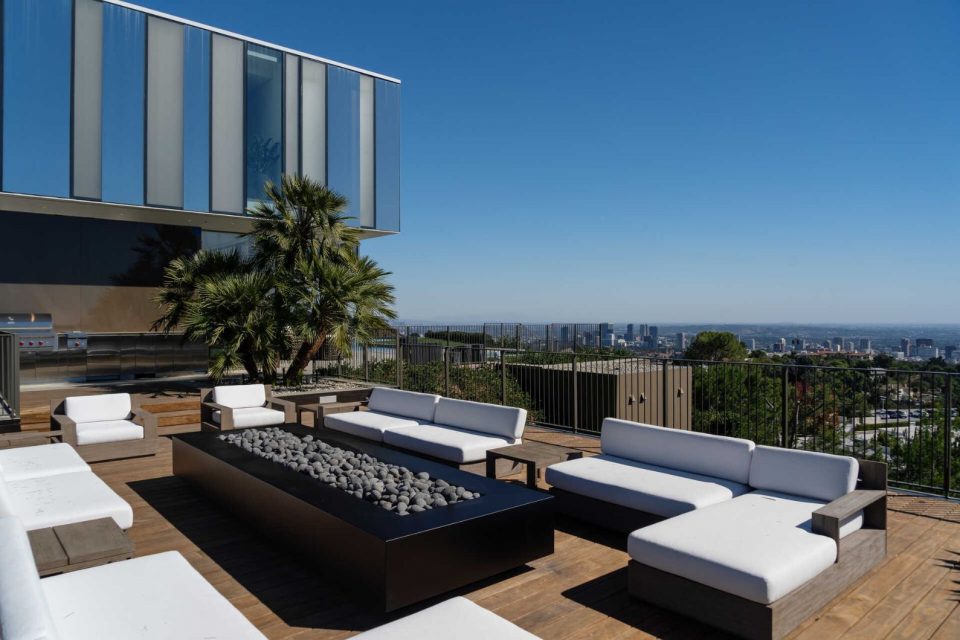 An outdoor kitchen serves this lounge. 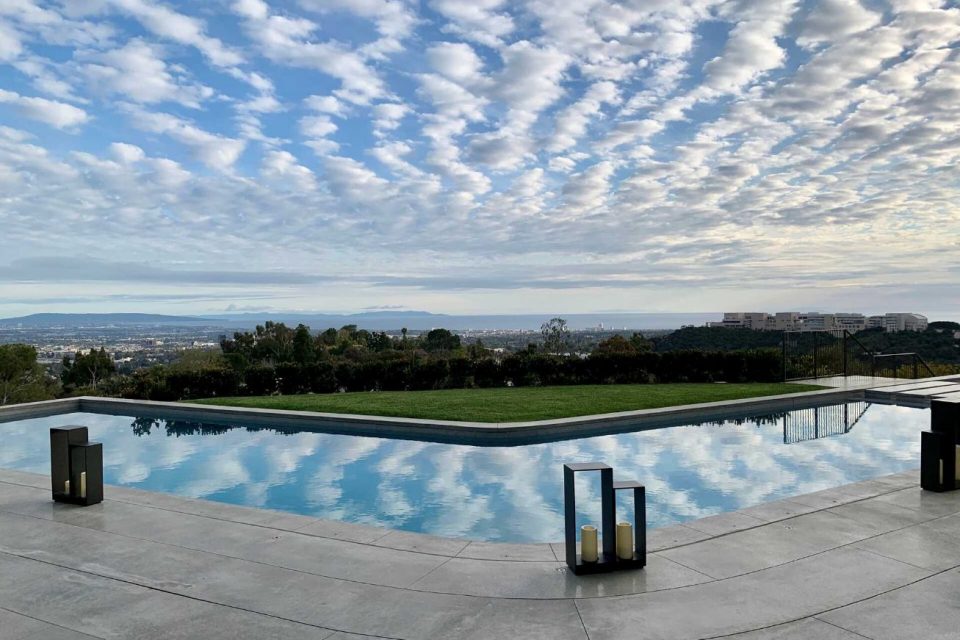 The LED-lit, ozone, mirror-image pool and spa are spectacular. 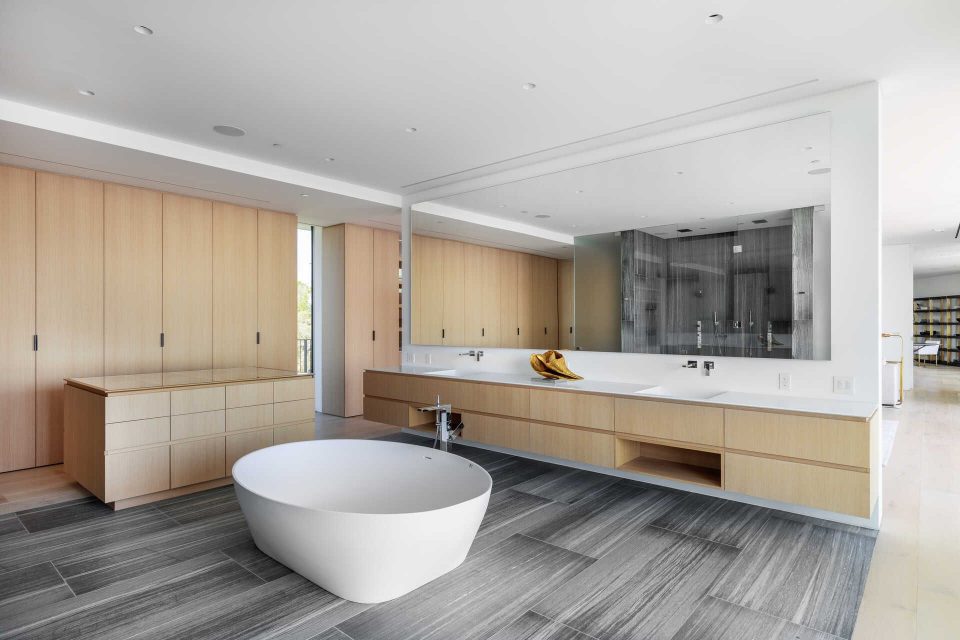 Every bedroom has its own bathroom with spa tub. 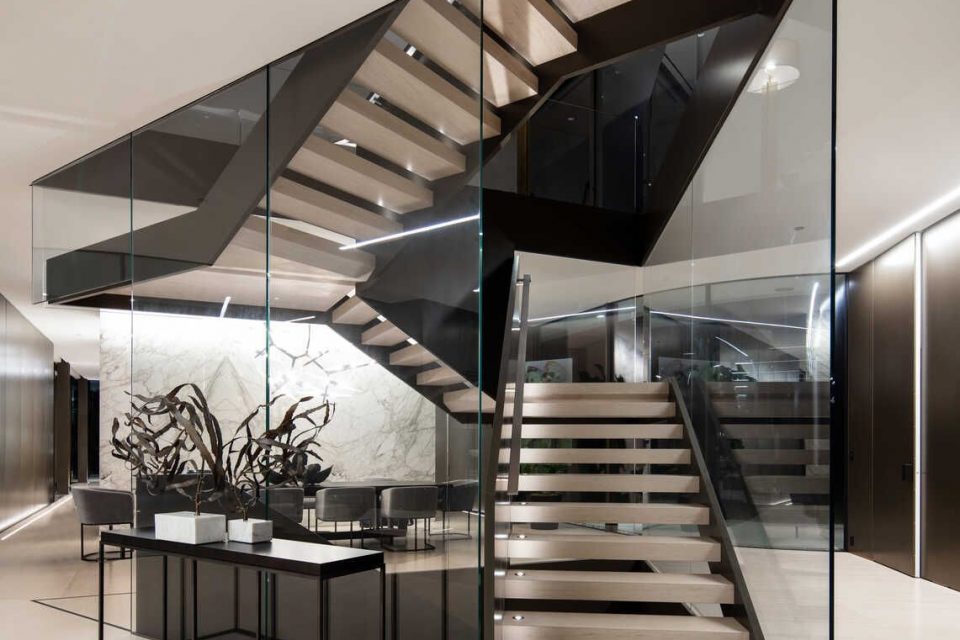 The steel and glass staircase is a work of art. 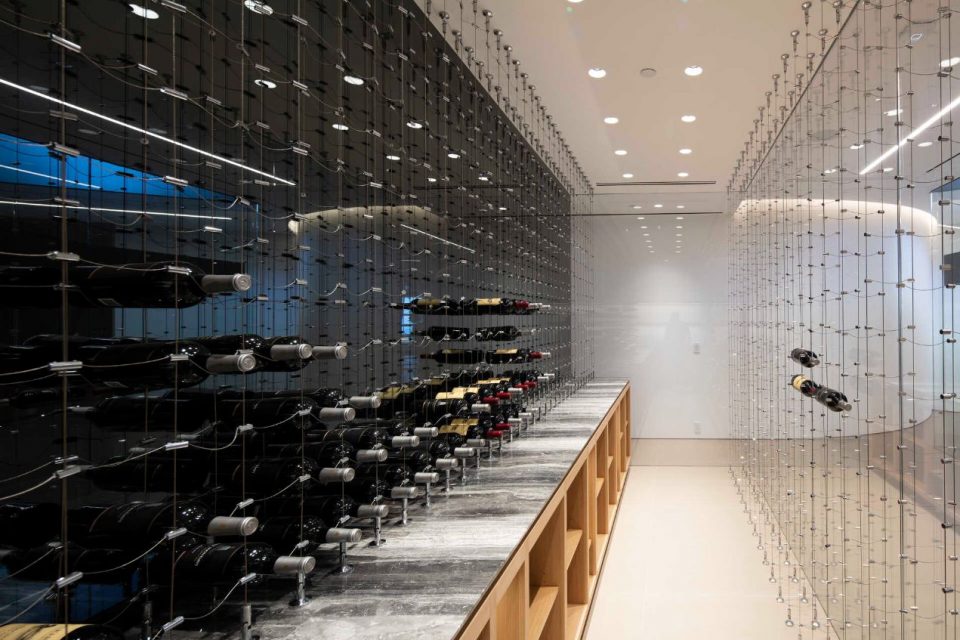 The 1000 bottle wine room is just one of many amenities. 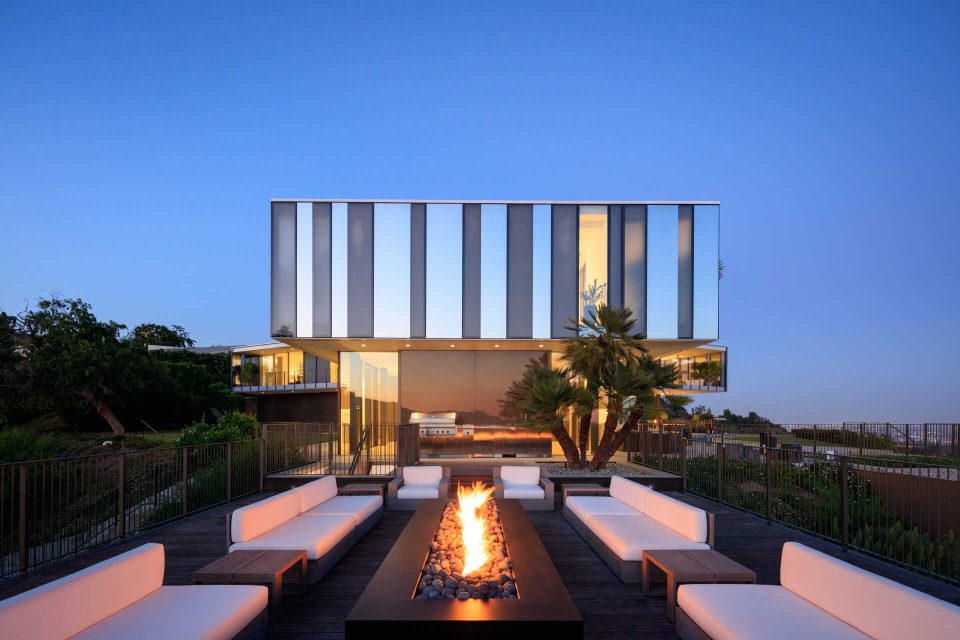 The mansion is designed by famed architect Zoltan Pali.

Beyoncé is the face of a new Tiffany ad, which debuted during 2021’s Emmy Awards broadcast, and has the Internet and Madison Avenue abuzz. A tribute to the Audrey Hepburn movie Breakfast at Tiffany’s, the 90-second commercial showcases Beyoncé playing the piano while singing the movie’s Academy Award-winning, "Moon River," and wearing the company’s iconic 128.54-karat Tiffany Diamond. Just as opulent as Beyoncé and the Tiffany Diamond is the commercial’s setting, a spectacular Bel Air hilltop contemporary, The Orum House, which is on the market at $42 million.

Designed by architect Zoltan Pali, whose other projects include The Getty Villa and The Pantages Theater, The Orum House is a three-story architectural masterpiece with laurels of its own, including an American Influencer Award. Designed to float above the surrounding city, the glass-walled estate sits alone atop a promontory in the foothills of the Santa Monica Mountains, offering unobstructed views of the Los Angeles Basin from the Getty Center to Downtown and all the way to Long Beach. Glass in four different opacities make it look like the home’s exterior shifts and shimmers in the L.A. sun.

At the top of the steel-and-glass central staircase (or one of the two elevators), the residence’s third floor provides ample space and comfort for the family, carefully delineated from the entertainment zones of the lower floors. Five bedroom suites, each with its own spa tub, are headed by dual masters with their own terraces and spectacular 270-degree views. A detached guest-house known as “The Cube” offers four additional bedrooms for guests or staff. Imported gold, white and black marble enhance the home’s luxurious contemporary aesthetic. The Orum House is offered fully furnished, with interior design choices and curated works of fine art.

Sitting on 1.6 acres of prime Platinum Triangle real estate, the ultra-private residence is located in one of Los Angeles’ most exclusive neighborhoods. With sky-high prices and one-of-a-kind estates, Bel Air is home to numerous celebrities, including Beyoncé. The singer and her husband, fellow superstar artist Jay-Z, share a nearby $90 million mega-mansion with their three kids and an unrivaled collection of musical accolades.

Beyoncé is one of the most-awarded recording artists of all time, responsible for 28 Grammys, 29 MTV Video Music Awards, 31 BET Awards, and Billboard Hot 100’s Female Artist of the Decade in 2010. Her 22 Billboard #1 songs, including “Single Ladies,” “Crazy in Love” and “Run the World,” have propelled her to $118 million in record sales and international superstardom. She is only the fourth woman, and the first Black woman, to wear the $30 million Tiffany Diamond.

The listing is held by Mauricio Umansky and Farrah Brittany of The Agency. 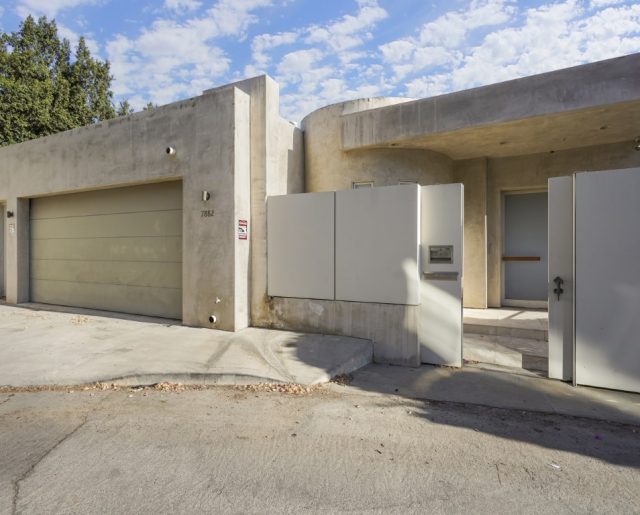 Kanye West’s first home in the Hollywood Hills, where he lived for almost 15 years, is for sale.  Its clean...Read More