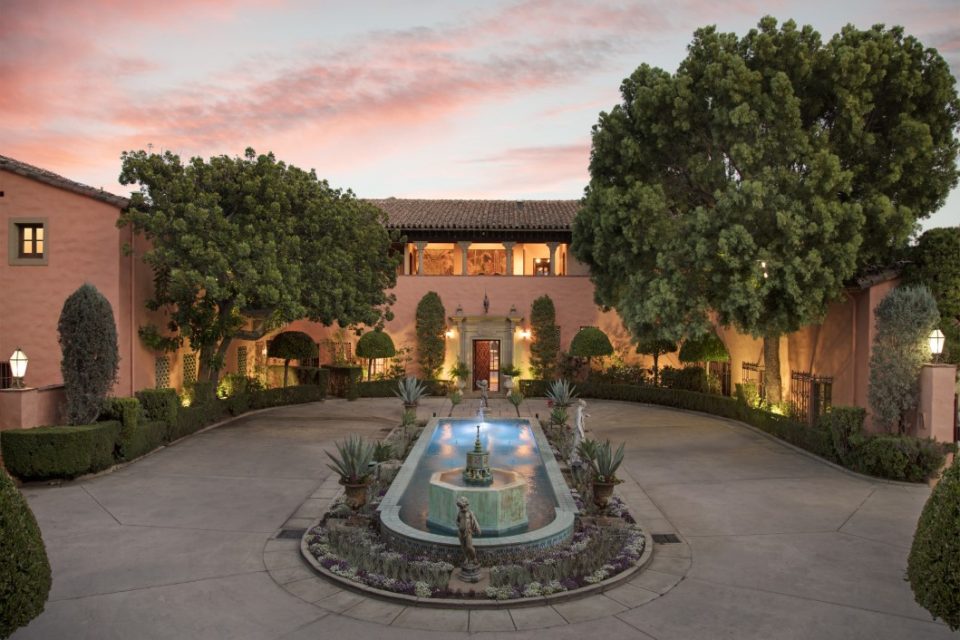 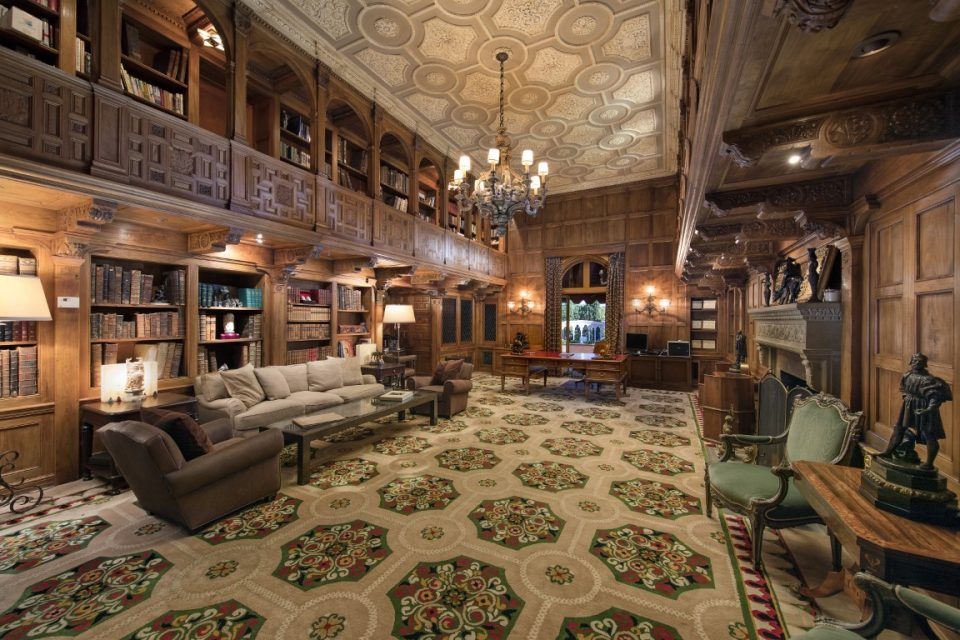 The grand two-story library has the same pattern in the carpet as the ceiling. 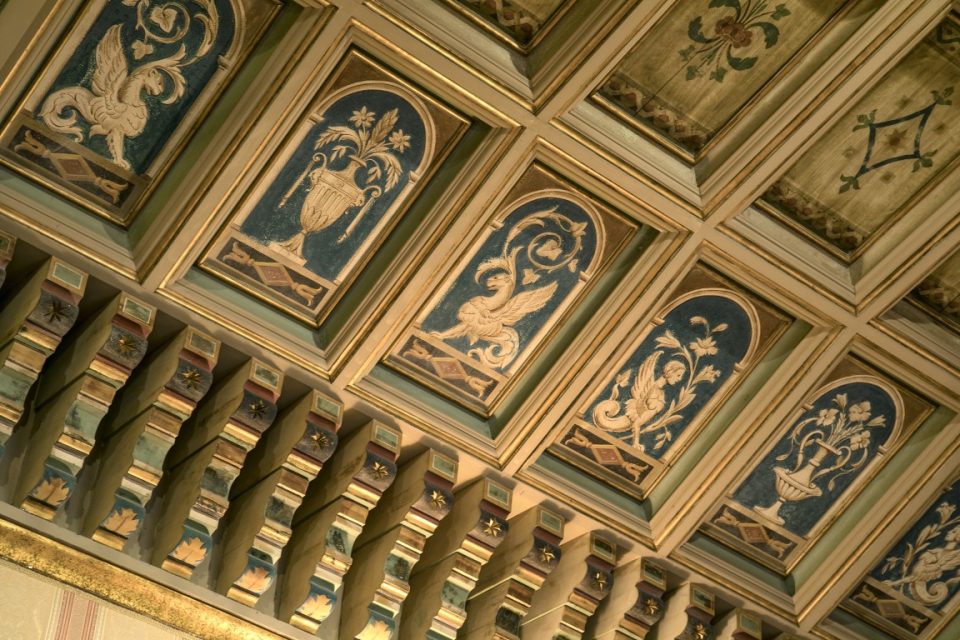 Many ceilings are hand carved and decoratively hand painted. 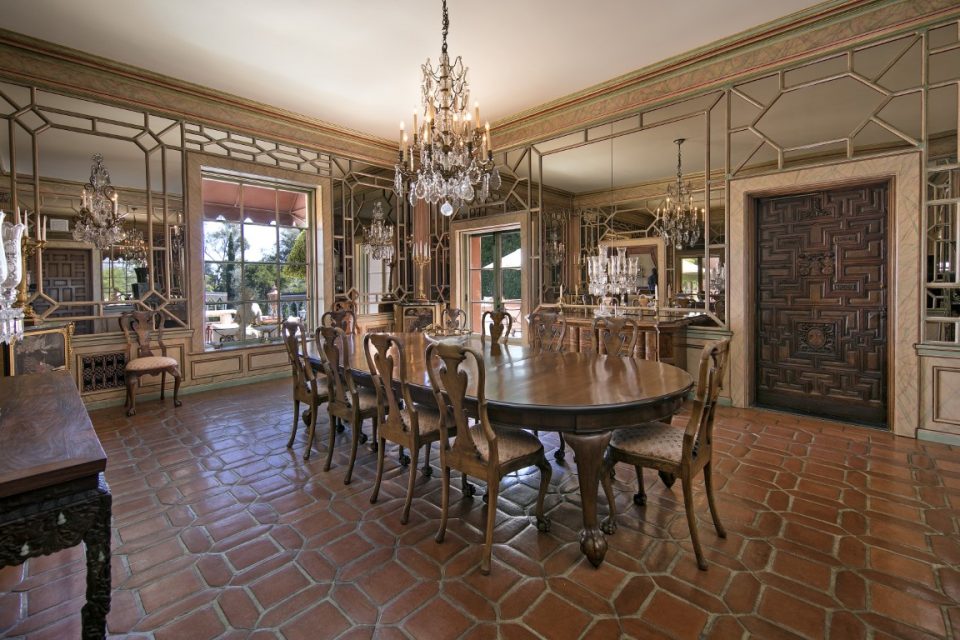 The formal dining room is only one of many dining venues. 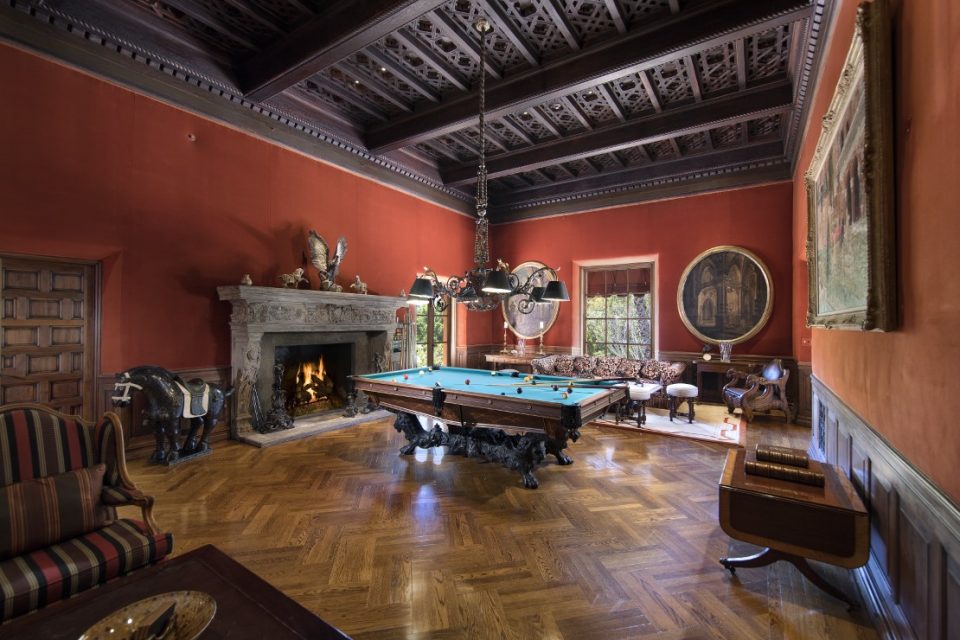 The pool table is from 1868 and is one of only three like it still in existence. 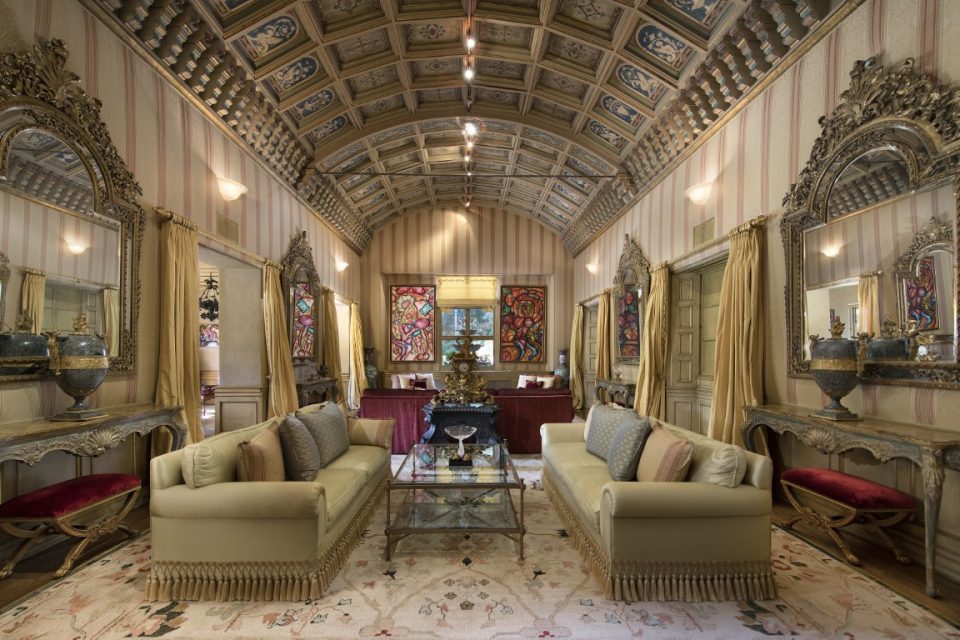 The living room has 22-foot-arched ceilings that are hand painted and the room also serves as a screening room, 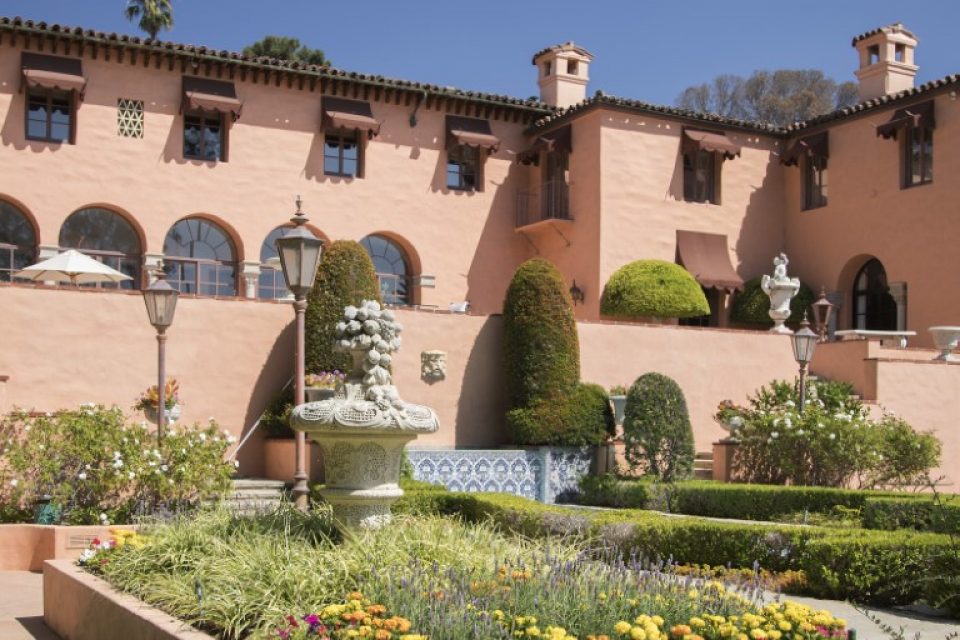 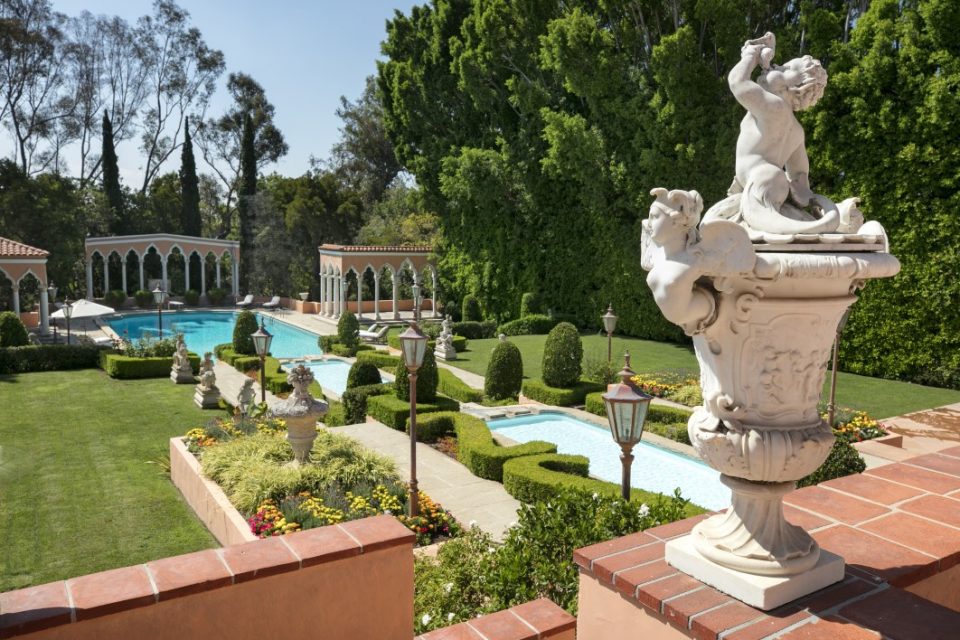 Sculptures and paths lead along the spillway to the pool and columned pergolas. 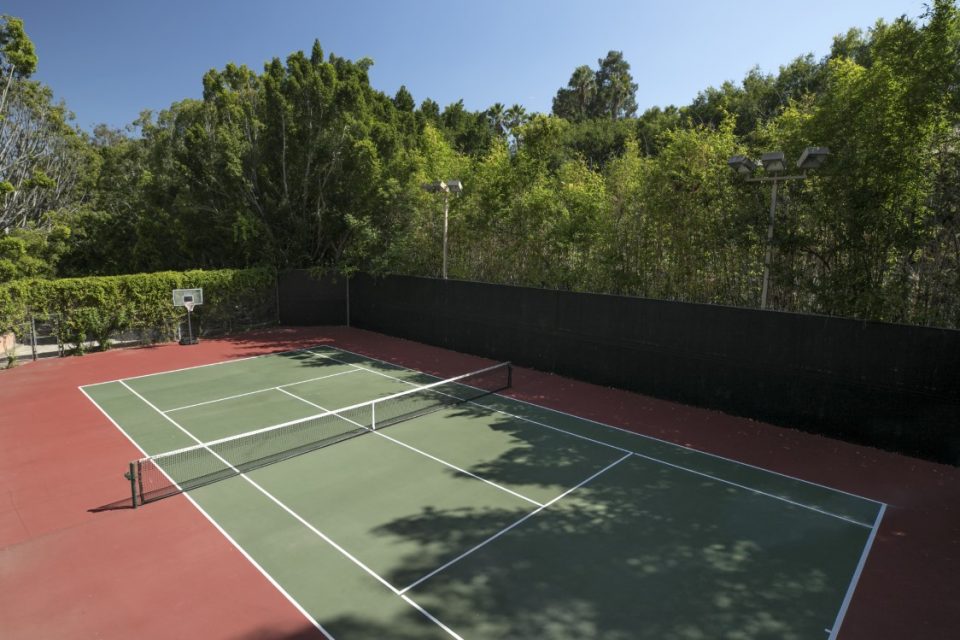 Tucked away in its own private space is the tennis court and pavilion. 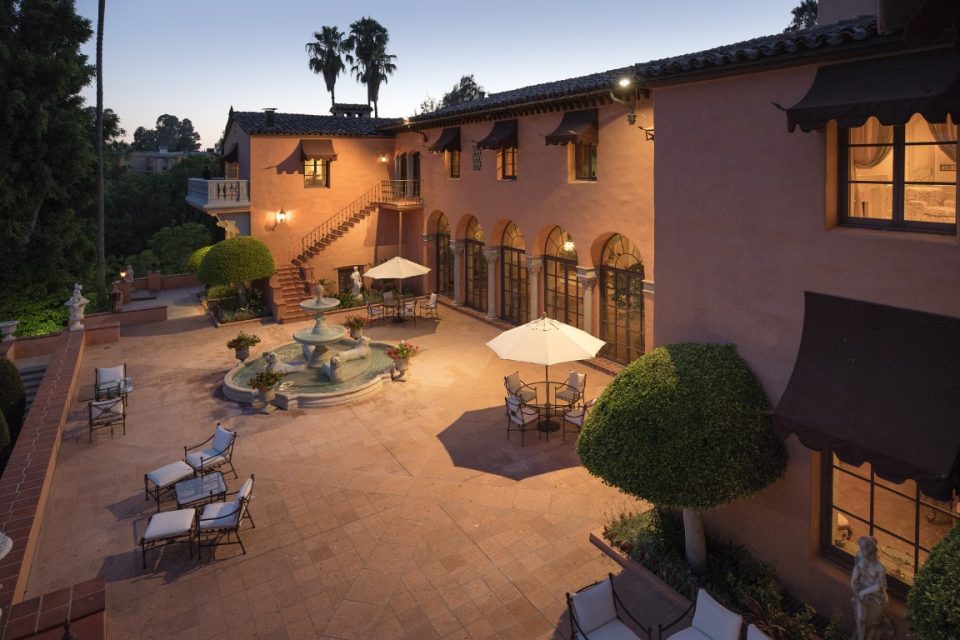 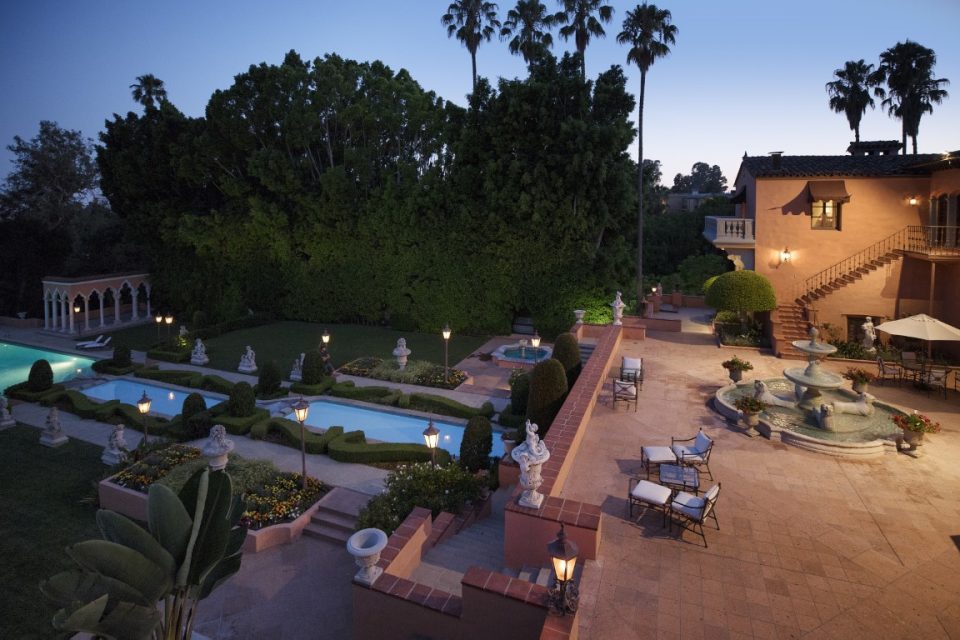 Lighted paths along the terraced spillway to the pool area are perfect for an evening stroll. 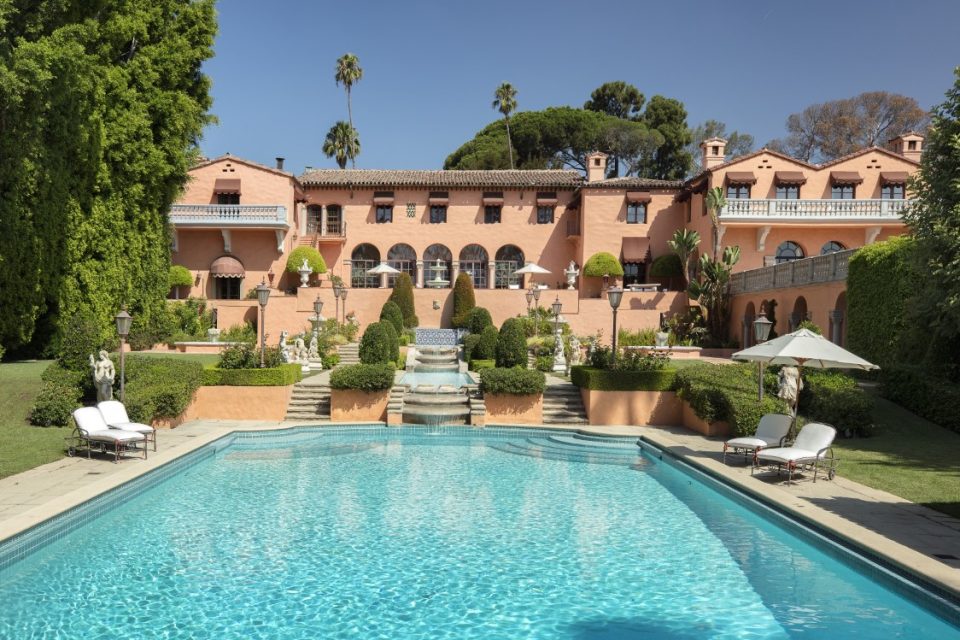 The large pool is both attractive and great for swimming and its terrace a sunbather's paradise.

One of California’s most historic and opulent mansions, a honeymoon love nest for Jack and Jackie Kennedy, and a big star in movies such as The Godfather and The Bodyguard, the famous Hearst Estate has finally sold. The only question is the final price.

Newspaper magnate, yellow journalist and two-term Democratic congressman from New York, William Randolph Hearst, the inspiration for the Charles Foster Kane character in Citizen Kane, and actress Marion Davies began their torrid love affair in 1917. He was 53 and married while she was a 19-year-old chorus girl when they moved in together at his world-famous Hearst Castle in San Simeon, California. When he agreed to downsize from the imposing 69,000-square-foot estate, Davies bought him a smaller mansion in Beverly Hills - where they lived until his death in 1951.  Previously known as The Beverly House, the mansion has been a frequent filming site used as a backdrop for the movies The Godfather and The Bodyguard and Beyoncé’s music video, Black is King. The home was also where Jack and Jackie Kennedy stayed during the Southern California segment of their 1953 honeymoon.  Mrs. Kennedy was so excited to be staying in such a stunning estate, she wrote a four-page letter about her stay, which is framed along with photographs that are on display at the home. The mansion was later used by Senator Kennedy as the West Coast headquarters for his 1960 presidential campaign.

Behind iron gates on 3.5 acres and down an 800-foot driveway past a five-room gatehouse, the impressive 30,000-square-foot mansion first comes in to view.  On entering, there is such a volume of space that one is focused only on its vast size. The living room has 22-foot-arched ceilings that are hand painted.  The room also serves as a screening room with wooden shutters that can be closed to block out light.  The family room is also used as a second screening room.  There is a magnificent two-story, hand-carved, wood-paneled library where the pattern in the carpet replicates the same ceiling pattern.  The billiard room’s fireplace surround is from Hearst Castle and is one of eight in the house.  The pool table is from 1868 and is one of only three like it still in existence.   An Art Deco nightclub is on the lower level modeled after Hugh Hefner's former Beverly Hills club, Touch, with the club’s original etched glass and doors.

Outside the Hearst Estate, the Olympic-sized pool is fed by two reflecting pools that spill into the main pool surrounded by terraces, manicured lawns, columned pergolas and splashing fountains - an area that can accommodate up to a thousand guests.  Tucked into the landscaping is a tennis court with its own pavilion.  Ancillary improvements include two staff/guest apartments, a pool house and a two-story, five-bedroom gatehouse.

Having been on and off the market during the 40 years it has been owned by financier-and-attorney Leonard M. Ross, who was forced into bankruptcy in 2019, the Hearst Estate was listed in August 2020 at $125 million. In April 2021 the price was dropped to $89.75 million and in June down to $69.95 million.  After reaching the June price, the estate received multiple offers which were reviewed by the bankruptcy court.  A price of $47 million was accepted by the court, but during the final proceedings will be open to a brief auction in the attempt to garner a higher price before the gavel falls.  Regardless of what happens before the gavel hits its mark, Mr. Ross will be saying goodbye to his exquisite mansion, and it will move forward to welcome a new set of owners and guests.

The property is co-listed by Anthony Marguleas of Amalfi Estates, Gary Gold of Hilton & Hyland, Zizi Pak of Rodeo Realty and John Gould of Rodeo Realty, all located in Beverly Hills.

Editor note: A final bid of $63.1 million was accepted by the bankruptcy court. 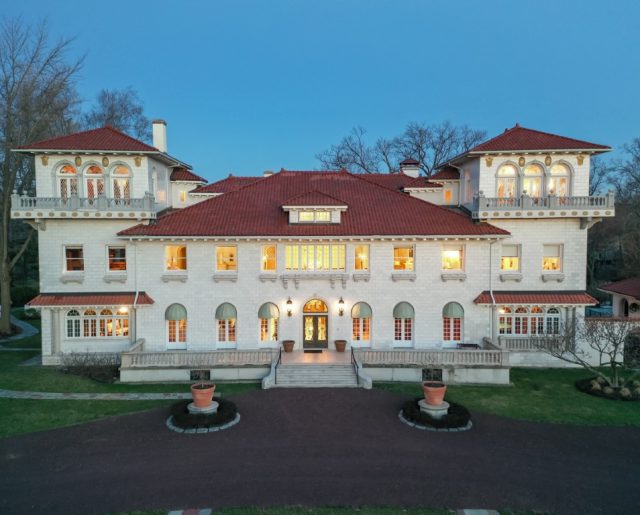 Well…not exactly peanuts, but perhaps the deal of the year!  An Englewood, New Jersey mansion that was built for Polish...Read More