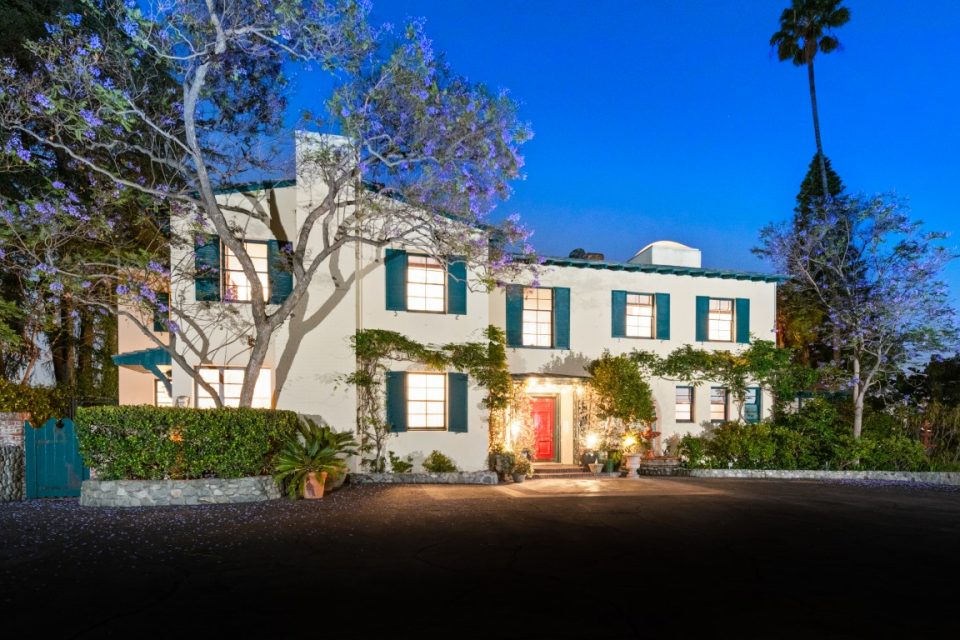 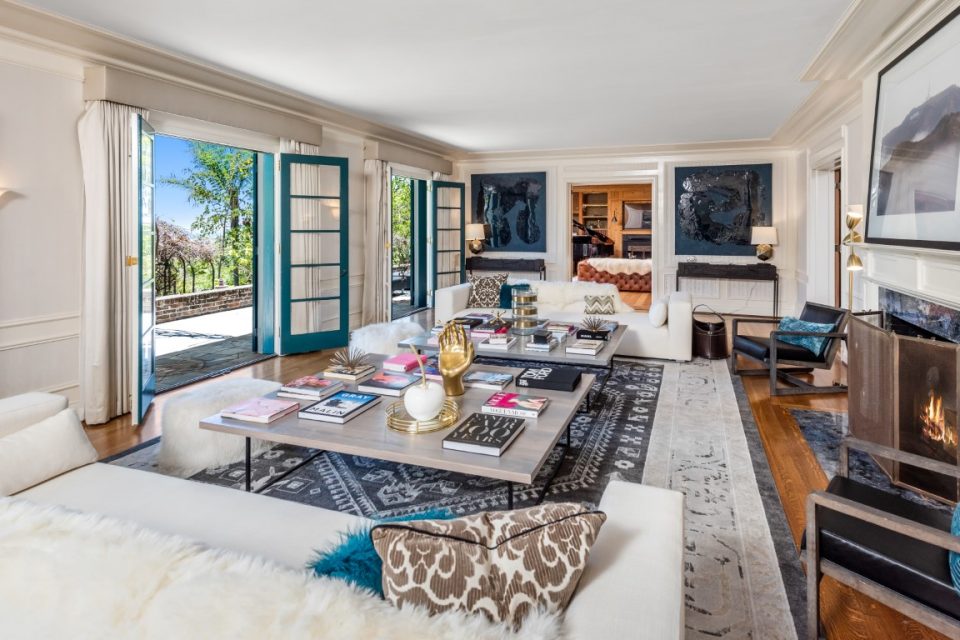 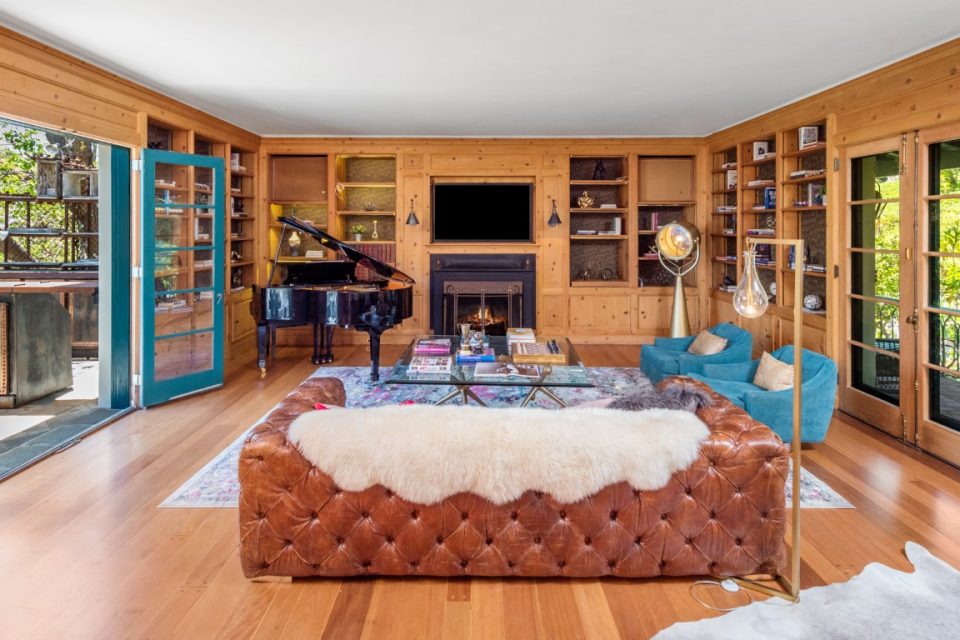 It has a paneled library, large fireboxes in the fireplaces. 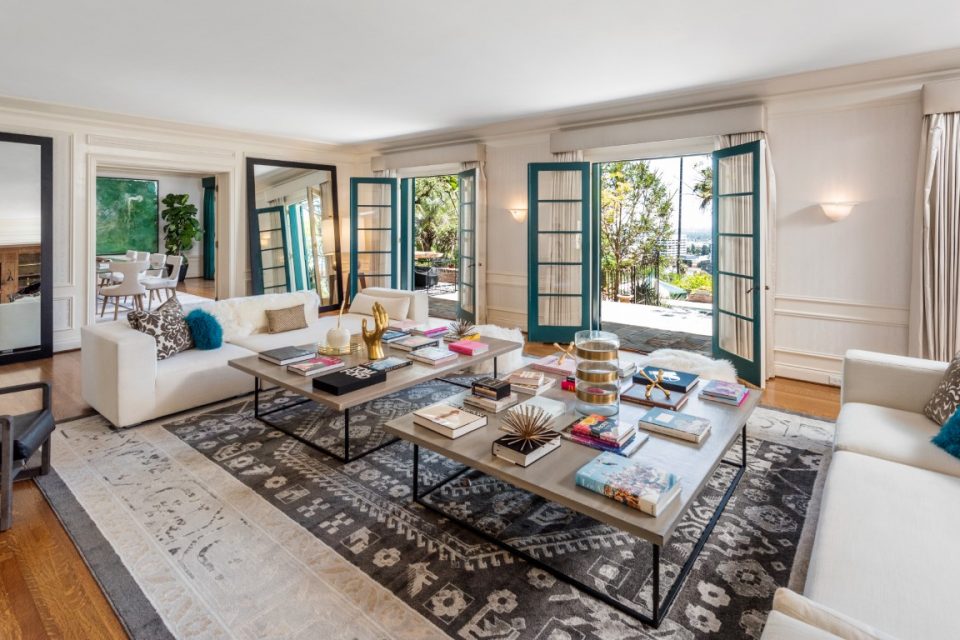 Lots of French doors open to catch the breeze. 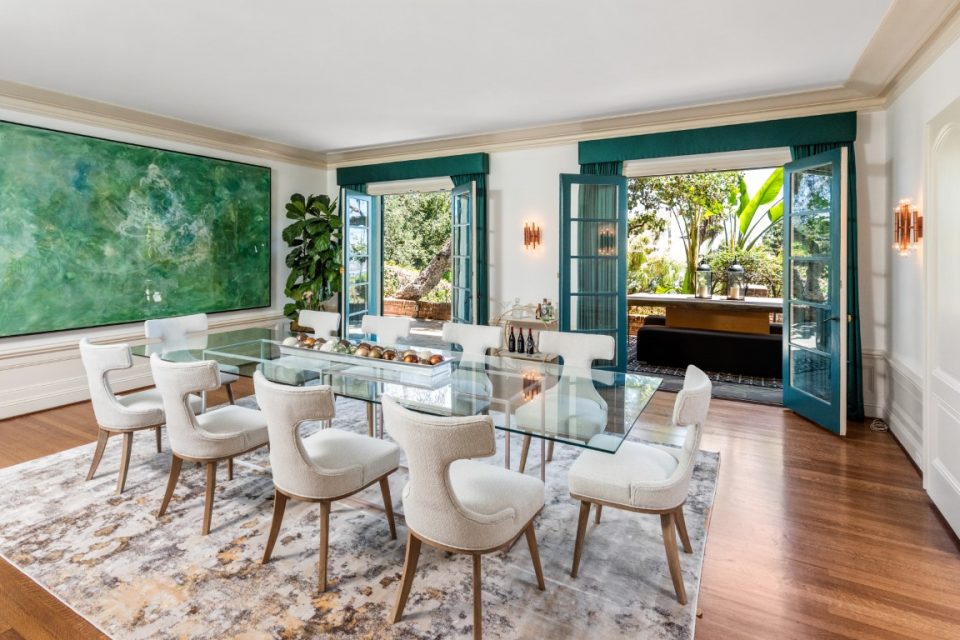 The formal dining room is sized to host many family and guests. 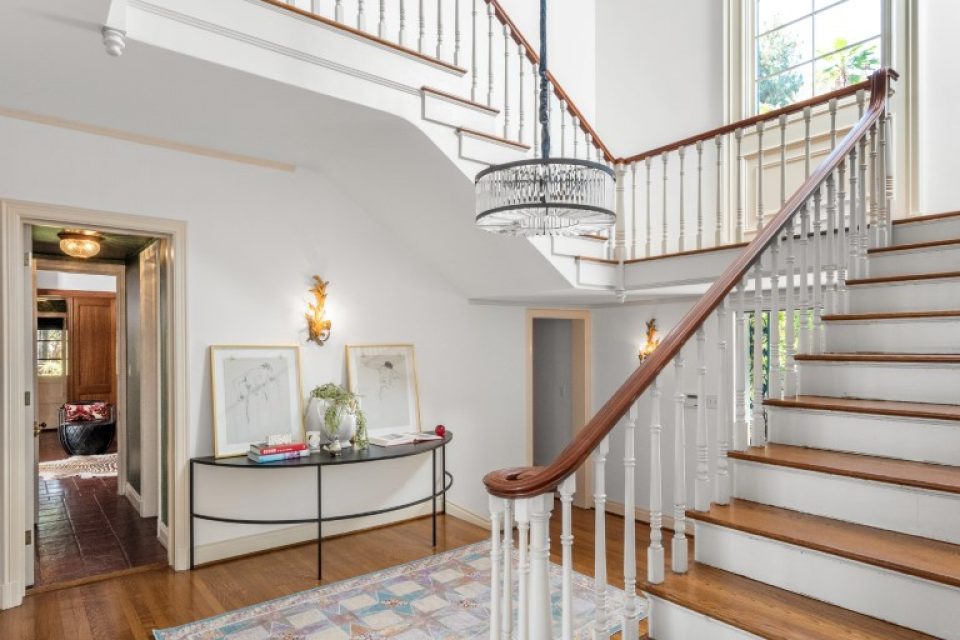 An open and airy staircase leads to the second floor. 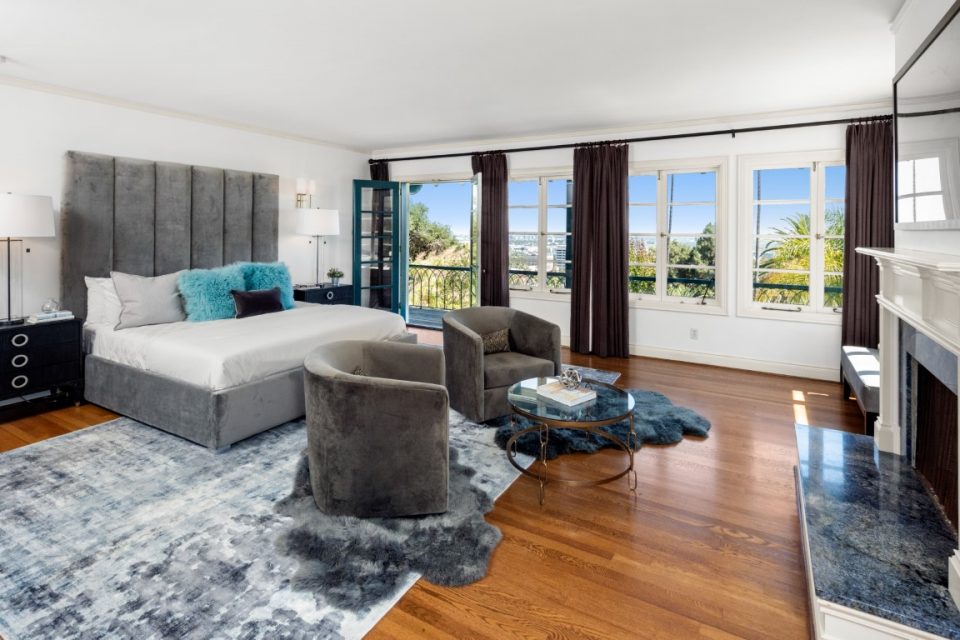 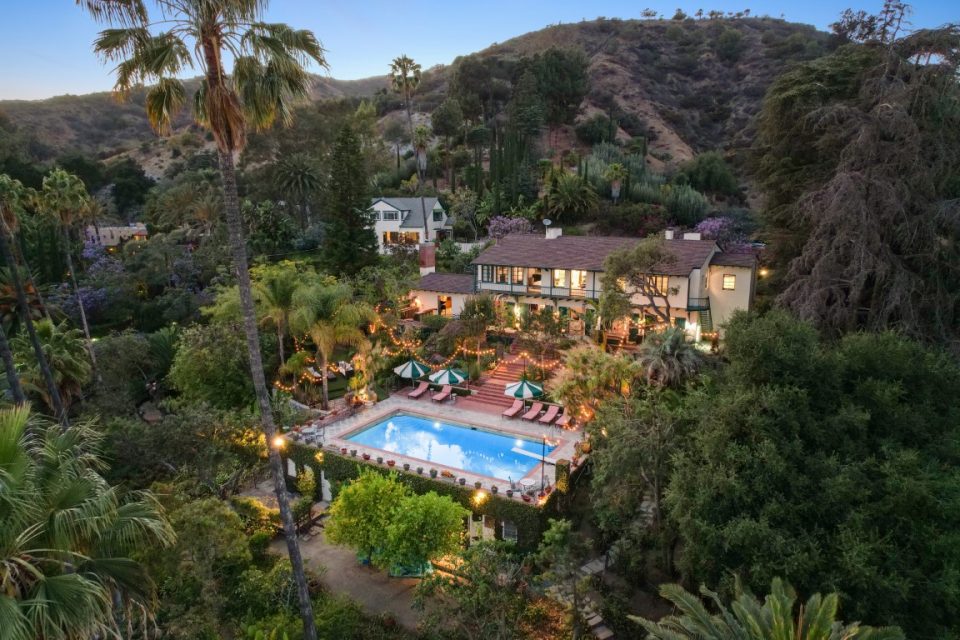 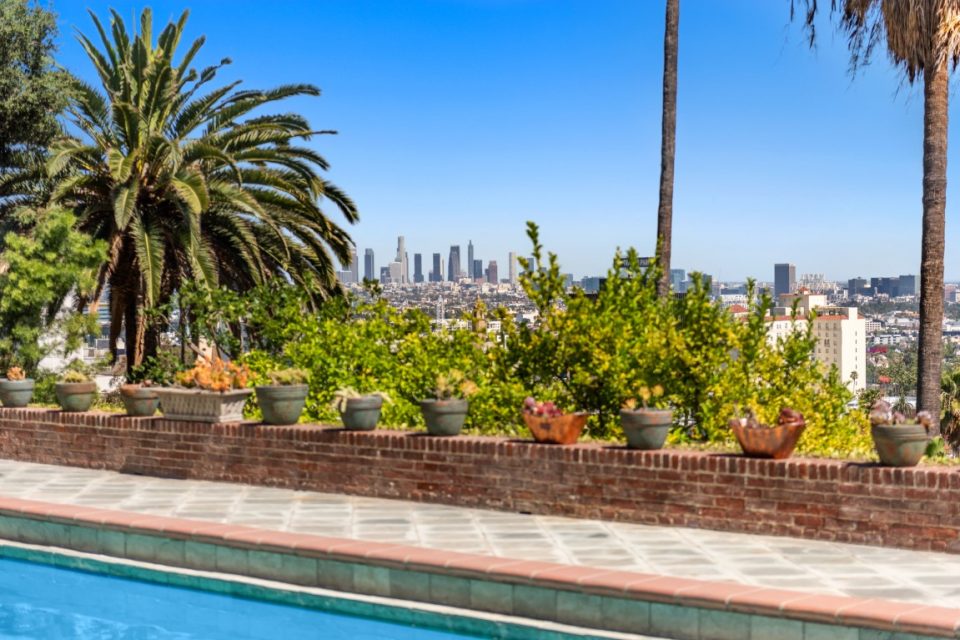 Enjoy the views while taking an afternoon swim. 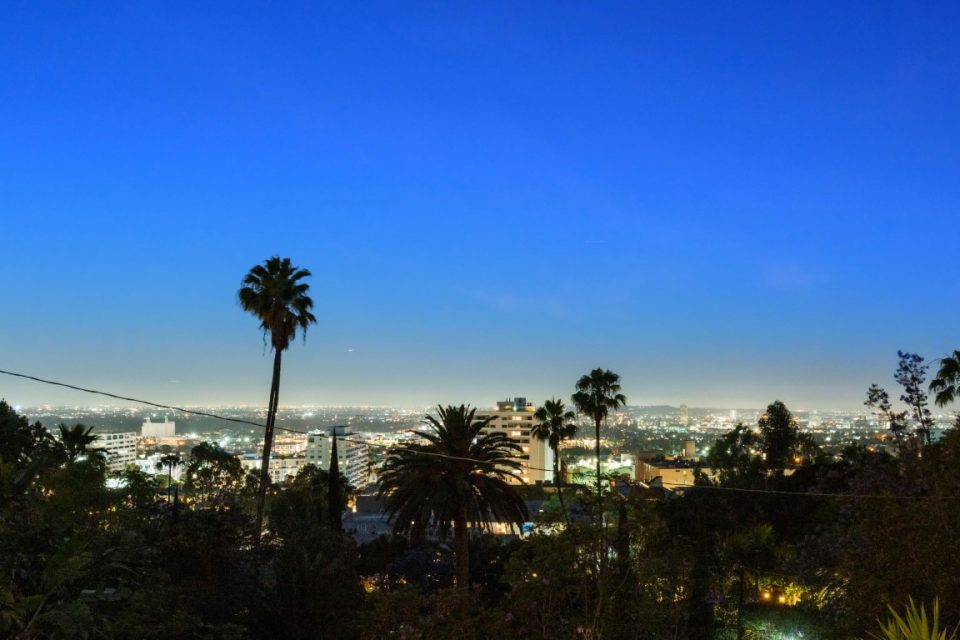 As evening approaches, the sparkling Hollywood lights begin to twinkle.

Now living most of the year in a secluded mountain home on the Nevada side of Lake Tahoe, where she recently had to chase off a black bear from her garden, Helen Mirren and her director-husband Taylor Hackford feel that it’s time to either sell or rent their storied Hollywood Hills home of 30 years.  Finding it a little hard to let go, they are offering it for sale at $18.5 million or for rent at $45,000 a month.

London-born Mirren has had a fabulous career, the only actor to achieve the Triple Crown of Acting in both the US and the UK with Oscar, Emmy and Tony awards. Her Academy Award win was for Best Actress in the film The Queen acting the part of Queen Elizabeth II. Taylor won his own Academy Award for the short film Teenage Father and has directed such favorites as An Officer and a Gentleman and Against All Odds.  In 2003, Helen was appointed Dame by Queen Elizabeth for her acting career that dates back to age 20 when she starred as Cleopatra for a UK National Youth Theatre production. Helen became a U.S. citizen in 2017 and voted for the first time in the 2020 election.

Built in Hollywood's earliest days in 1911 and located on over six acres, the 10,200-square-foot Mirren-Hackford estate includes a guest house and a total of nine bedrooms and eleven baths.  A popular neighborhood with the Hollywood crowd, the home has had only four owners: Dustin Farnum, star of DeMille's Squaw Man; Mark Hellinger, writer/producer whose short story became the Bogart/Cagney film The Roaring Twenties; Gail Patrick, executive producer of the popular 1950’s/60’s Perry Mason television series where the home was sometimes used as a film location for the show, and Mirren-Hackford.  The house has all the great features of its era, including large rooms, lots of French doors that open to the hilltop breeze, a paneled library, beautiful hardwood floors and large fireboxes in the fireplaces.  One special room is the cozy bar with bar stools and comfortable sofa and chairs for more intimate entertaining.  The large formal rooms and outside living area with pool and downtown views cover entertaining for large groups and family get-togethers.  The early California indoor/outdoor architecture makes the house warm, inviting and relaxing for both family and friends.   It’s this element and the home’s adaptability to different lifestyles that make the house a hard one for Mirren to let go.

Hollywood Hills is awash with celebrity residents such as Leonardo DiCaprio, Keanu Reeves and Halle Berry.  It has been the neighborhood of choice since the beginning of filmdom due to its proximity to the studios and is known for its views and star-worthy gated homes nestled behind deep privacy foliage. 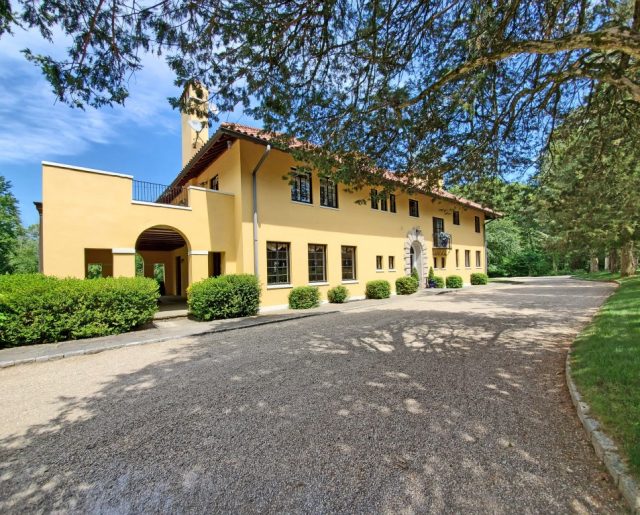 Samuel Langhorne Clemens was fascinated by thoughts of adventure as a boy, dreams that he later wrote about when he...Read More